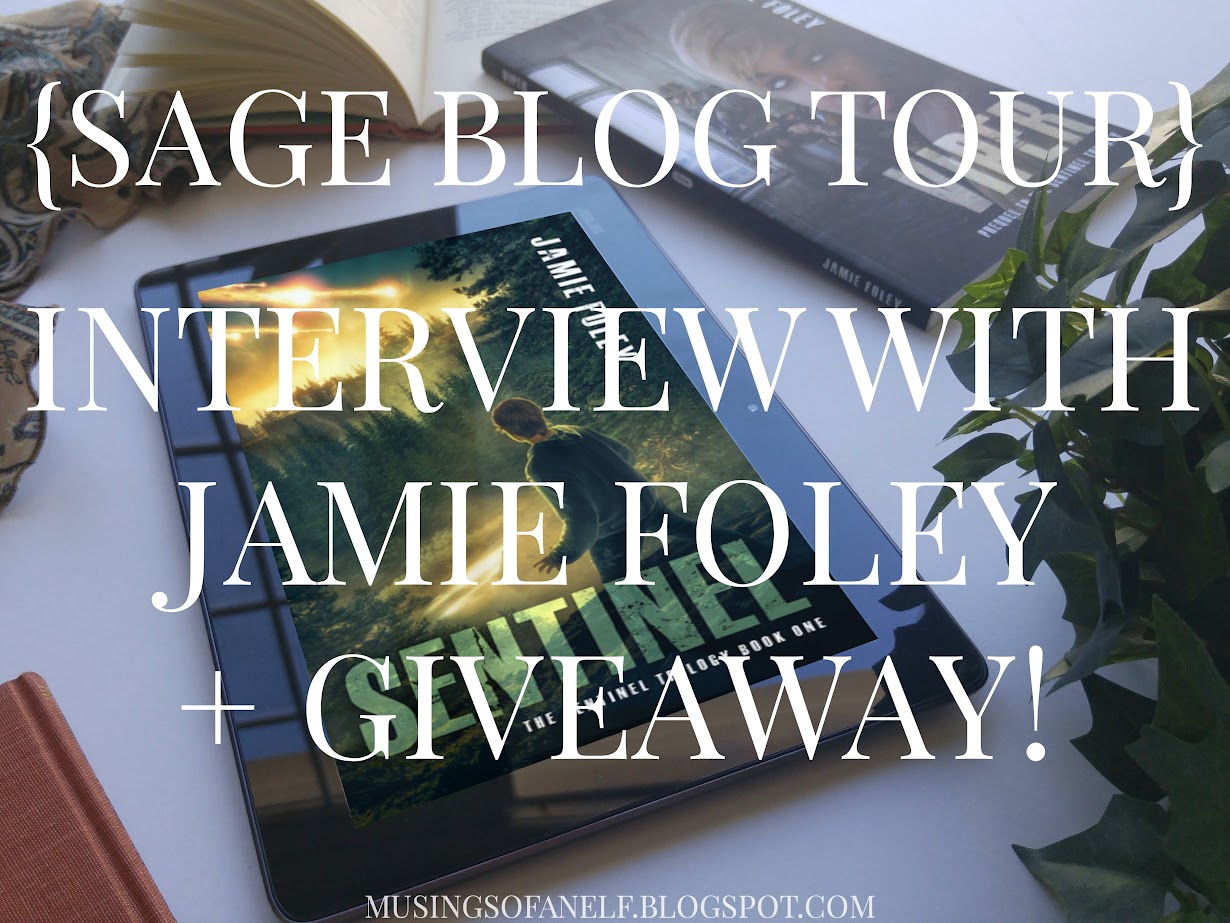 Sage, book 3 of the Sentinel trilogy, has just released!!!

OKAY. SO. You’ve probably seen me talking about this trilogy on multiple occasions for months on end now. I first read Sentinel (book #1), last summer and instantly fell in love. I then proceeded to devour the prequel novella, Viper (though I believe it’s titled Vanguard now) and the second book, Arbiter. In which I wept once I was done because I had read all the books available and book #3 wouldn’t be out for a while.

BUT IT IS OUT NOW AND I HOPE TO DEVOUR IT POSTHASTE.

These books, guys! I can honestly say they’re some of the most unique stories I’ve ever read. I’ve never come across anything like them. They’re set in a apocalyptic-ish world based heavily on ours (as in, there are cell phones, cars, normal modern day stuff), but the catch is some people possess very unique special abilities. Throw in some military intrigue, a crazy awesome plot, snark for daaays, utterly complex and loveable characters, and…yeah. SIGN ME UP. I feel like my description isn’t even doing these books justice… The overall feel is so DIFFERENT. Truth be told, it almost has a Final Fantasy vibe (for my fellow nerds who have played those video games)—people with unique powers and fantasy elements thrown into a modern-like world. I DON’T KNOW. They’re just really epic books! YOU NEED TO READ THEM.

Buuut if I haven’t yet convinced you to stop everything you’re doing to go purchase them, stick around. Because I have more exciting news.

Jamie Foley, the author herself, is here today for the official Sage blog tour!

Jamie graciously allowed me to interrogate I mean, AHEM, interview her. She shares some positively fascinating tidbits about the story, her writing, and her own life. By the end you’re going to be clamoring for her stories. Trust me!

So enough from me! Let’s go started. (But do stick around to the very end, because I have even more fun for you. *grins*) 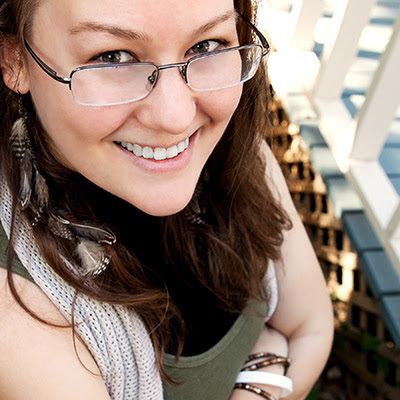 Her husband is her manly cowboy astronaut muse. They live between Austin, TX and their family cattle ranch, where their hyperactive spawnling and wolfpack can run free.

The Sentinel trilogy is such a unique story. How did you come up with the idea for these novels? What was your inspiration?

Aw, thanks! It's hard to pinpoint one source for my inspiration, but the overall feel is probably based on a hodgepodge of Star Wars, The Chronicles of Narnia, The Lord of the Rings, and books by Frank Peretti and Ted Dekker.

Several events in the story either come from my own experiences or those of people who are close to me. One character deals with a fatal illness—that's inspired by my little sister, who was 6 when she was diagnosed with leukemia (I was 12). She's a super-fit personal trainer now, but it impacted our family dramatically when I was growing up. We're so much stronger because of it.

An event in Arbiter brings up a cliche-feeling amnesia episode, but amnesia was anything but cliche for me. I was involved in a 10-car pile-up caused by a speeding 18-wheeler when I was writing that book—my car was the second one to be hit, and I shouldn't have walked away from it. I had a massive concussion and still suffer with memory issues to this day.

The miscarriage that a character refers to in Sage is based on my personal experience.

It's not all crazy awful stuff, though—the marriage relationship in Sage is based heavily on my own. Basically, I have the best hubby ever, and I have to keep pinching myself to remind myself that it's real. :)

Your delightful cast of characters is so colorful and complex. Do you have a favorite out of them? Who proved to be the most fun to write about?

They're complex, all right :P Sorvashti is probably my favorite overall, if I have to choose. Darien is fun to write because he's just covered in cheese. And Zekk's POV is always fun because he's so low-stress and slick.

I feel most connected with Jet. I wanted to go into the military when I was growing up, but my Korea-veteran grandfather forbade his first granddaughter from enlisting. I chose to respect his wishes. Jet lives out that path that I never got to take.

Jet is so stubborn, though. He was the biggest pain in the butt to write about, because when I'd be writing, he'd decide that he wanted to do something different than I'd planned. He didn't care about my outline. I had to change major parts of Arbiter and Sage because of him. *grumble*

In your stories, the characters have specific abilities called “Aether Gifts”. If you could have one of the gifts, which would it be and why?

I'd be an exorcist! I love MMA and trained in Krav Maga for a while (I need to get back into it). I think the exorcist gift goes best with that. It can throw people with other gifts off their game by stealing their aether.

What do you wish your readers to take away from the Sentinel trilogy? How do you hope they’ll feel after reading the finale?

I hope readers will realize that, in fiction or in real life, goodness and joy can come out of even the darkest situation. When a reader finishes the finale, I hope they'll be crammed full of happy feels.

And I hope they won't kill me for what I put the characters through to get to the happy ending. *innocent smile*

Which of the books in your series gave you the most joy to write? And which one was the most challenging?

The prequel novella, Vanguard, was my overall favorite to write because it was the shortest, and we get to see a mentor character (Jet) as a rookie. We also got to visit a different part of the world and different cultures within it.

Sage was difficult just because it was so long, but I think Arbiter was probably the most challenging because I was trying to avoid the sequel slump. It's just such a wild ride... I felt like I was balancing on the line between creating a terrible middle book and rubbing my reader's nerves raw.

Tell us a little bit about your writing process. What are your favorite and least favorite parts?

I'm a 'plotter' instead of a 'pantser,' which means I meticulously plan out my books before I write them. I first do a skeleton plot, then an outline, then a detailed outline for each chapter, and finally pre-writing before I actually write (these phases are explained in my non-fiction book, The Busy Mom's Guide to Writing, which comes out on March 30, 2018).

My favorite part is probably tied between worldbuilding and pre-writing funny dialogue. My least favorite part of the writing process is—surprise!—editing, but I have the best alpha readers, beta readers, editors, and proofers ever.

What do you enjoy most about publishing? And what part do you find the most stressful?

Both questions have the same answer: reviews. A good review will make me giddy, but authors compare negative reviews to rat poison for a reason. One careless reviewer who doesn't realize their words are like daggers can agonize a writer for days, or longer. I have friends who've nearly stopped writing because of mean, ugly, vicious reviewers.

Which authors influence and inspire you the most?

The authors who influence me most nowadays are my current favorite authors and friends: S.D. Grimm, Mary Weber, Nadine Brandes, and Sabaa Tahir.

Do you have more stories cooking up for us to look forward to? If so, can you give us some hints about these future novels?

Yes ma'am! I'm working on 2 new fantasy series—both will be epic fantasy. One is called Emberhawk, which is planned to be a 3-book series that will happen a couple thousand years before Sentinel. It will be more heavy on the romantic suspense side of things, involving elementals and tribes on the brink of war. You might even see an immortal character from The Sentinel Trilogy in it.

The other upcoming series is called Runes of Kona. It's planned as a 6-book series on another planet called Kona, and as you might have guessed, it involves rune magic. And royal bloodlines. And talking trees. And void dragons. hehe.

But since it will take me a while to get these new series out, I'm going to write a short story for The Sentinel Trilogy to tell Zekk's backstory—it will be available for free for my newsletter subscribers only (sign up at http://www.jamiesfoley.com/newsletter). That will come out in fall 2018.
I'm also planning a follow-up book to The Sentinel Trilogy called Sifter, which will tell the story of the children of the heroes 18 years after book 3: Sage. That's planned for release in 2019. :)

Lastly, what’s one piece of advice you would give all the aspiring writers out there?

Write because you love it, not for any other reason. 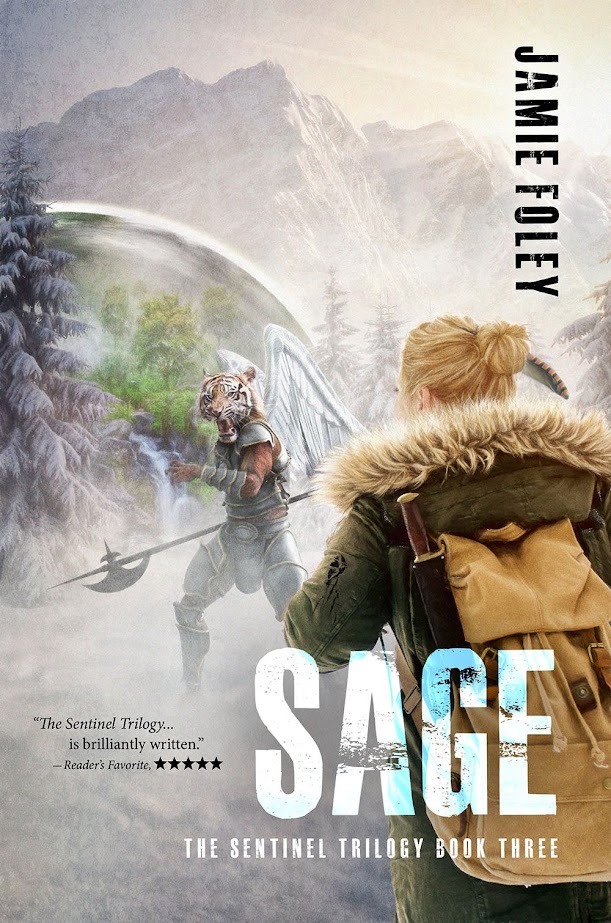 Ancient elementals awaken, fracturing a dying world to its core.

Teravyn Aetherswift returns to the land of the living, but everything seems unfamiliar… including her little brother. Zekk offers help, but can an alluring Lynx be trusted?

Sorvashti finally has everything she ever wanted, so the last thing she wants to do is run after traitors. But she won’t leave Jet’s side—unless the horrifying truth about his mother tears them apart.

Darien is sick of being used and lied to. But if he stands up for what’s right, he’ll pay the price with his life… or the lives of those he loves.

What’d I tell ya? Inspiring and fascinating, am I right? If you want even more fun, there is a whole group of fantastic bloggers featuring book spotlights, reviews, and more interviews! Do stop by and immerse in all the Sage fun!

Before you dive into all those delicious links and head over to Amazon to snag yourself a copy of these books, I have one more bit of exciting news. Jamie Foley is featuring a GIVEAWAY! *throws confetti*

Who doesn’t want an Amazon gift card? (To spend on books, obviously.) All you have to do is sign up for Jamie’s newsletter and you’ll be entered. Easy peasy.

Whew! So much excitement. (Seriously, guys, I can’t even properly express how thrilled I am over this book's release!)

Huge thanks to Jamie for letting me interview her. And for writing these brilliant books! I can’t waaaait to dive into Sage! *dances*

The obvious question: HAVE YOU READ THESE BOOKS?! If so, are you as excited as I am that the finale has released? (And can we talk about that cover? *droools*) If you haven’t read any of them…WHAT ARE YOU WAITING FOR? Off with you! And don’t forget to enter the giveaway!

Posted by Christine Smith at 9:45 AM