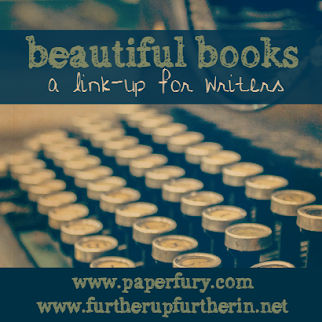 Visit Sky @ Further Up & Further In or Cait @ Paperfury
to get the questions and join up!

I know you did.

First of all, HAPPY 2017!!!!! Can you believe it’s the new year? (Well, maybe you can since we’re already a month in but my brain is slow, so humor me.) I am officially back from my hiatus and happy to post my very first post of 2017!

Why yes, it is still January and I did say I’d be taking all of January off but I’m soooo changeable (ha! two Moriarty references). Okay, really I saw there was a new edition of Beautiful Books and it was going to close at the end of the month so I couldn’t help but jump in. Which means you can all thank Sky and Cait for my early return!

My much needed break was a success and I’m feeling refueled and mostly ready to dive back into things. I’m taking it a little slow and not pushing myself. After new year’s and a pretty full January, and getting out of the habit of blogging/writing, it’s taking a bit of readjusting to settle back into it. But I’m getting there! January consisted of ringing in the new year with a Doctor Who marathon, much binge-watching of BBC’s Merlin with my sister, and watching SEASON 4 OF SHERLOCK (!!!!!!!!!!). So…apparently January has been a BBC month. HA. Every month is a BBC month for me. #Obsessed. January also consisted of a week long vacation with my best friend whom (sadly) lives out of town. But our time together is the bestest, and it was the perfect end to my hiatus. Now I’m back home trying to get things back into order and catch up on stuff.

WHICH MEANS BLOGGING AND WRITING AND THIIIINGS.

The question is, what do my writing plans for 2017 look like? Well, our dear Sky and Cait have concocted the perfect set of questions in this month’s Beautiful People to answer that very question! So let’s get to it…

1.) What were your writing achievements last year?

Some really exciting things went down last year. Mainly only 2, but 2 pretty big ones.

ONE: I dived into my first big, serious edit and, in the process, discovered I actually… *shifty eyes* like editing. *collected gasp* I KNOW. Maybe it was just this particular edit. Maybe it was the story. I DON’T KNOW. But I enjoyed it. And I’ve been avoiding the editing process for, erm, ever. I constantly write one first draft after the next, but avoid the whole revision thing like the plague. But 2016 was the year I was going to actual make progress toward my publishing dream. Which, obviously, included that ever dreaded and much avoided EDITING.

I did the first round of edits in my Beauty and the Beast story, Burning Thorns, and had an absolute blast doing it. That was probably the biggest highlight of 2016.

TWO: For NaNoWriMo I wrote More Gold than Sunlight, the 7th and FINAL book of my Colors of a Dragon Scale series. Which means, I FINISHED THE COADS SERIES. After working on it for 7 NaNos straight. I’m still a little shocked I’ll be not writing a CoaDS book for NaNo this year. But, uh, yeah, I’m quite excited over that achievement.

2016 is definitely a year I’ll remember on the writing front.

My number one priority for 2017 is Burning Thorns.

Last year I got the first round of edits done and a ton of amazing critiques from my dear beta-readers (love you guuuuys! <3). This year I’ll be taking those critiques to do the next round of edits. Like I said, my dream is publishing, and to actually get there I’ve got to edit and make for reals progress. THIS IS THE YEAR TO DO THAT. *pretends I’m not hiding under my covers whimpering at the thought*

With that said, I have some specific things I’m hoping (keyword there) to accomplish this year to help this dream become a reality.

SO. That’s what 2017 will maybe perhaps possibly look like for me on the writing side? Like I said, my biggest focus will be Burning Thorns, namely editing. But I do want to work on building up my platform more and finding some potential literary agents/publishers whilst editing. I need you guys to keep me accountable though because I always say I’m going to do these things and then never, ever get around to them. So any advice and/or yelling at me to get around to it would be amazing!

3.) Tell us about your top-priority writing projects for this year!

Whoops. I seem to have already done that. But in case you missed it. EDITING BURNING THORNS. (And if you’re new here (hello there! *waves*) and have no clue what BT is, you can check out the My Stories page for a blurb. But basically it’s a Beauty and the Beast retelling that involves an overly talkative heroine, a dragon (sorta), a mischievous fae boy, and deadly fairies. Because who wants a lovey-dovey romance story with no man-eating fae? Psssh. Boring.

To be more motivated to actually seriously work towards getting published! As I keep saying, I never get around to researching literary agents and things. And have only just started editing something instead of flitting off to yet another monstrous first draft that’ll sit in the dark corners of my laptop to the end of time, probably growling at me for abandoning it.

Also a bigger following on my social media would be great. But my ability to keep up with things is always questionable. >.>

HA. Well, since I’ve only done one serious edit before, and I tend to change up how I do things with every single new writing project, this answer is bound to change. But if you want a super detailed, long version of how I edited Burning Thorns specifically, you can check out THIS POST. But to sum it up…

Are we talking about BT’s first draft? Or it’s current draft? Um um um. I DON’T KNOW. It’s hard judging your own work! Although, this was the best draft I’ve ever written. Even it’s first draft wasn’t atrocious like most of my first drafts (which may be why I didn’t mind editing too much). I’d say the first draft would probably be a…6? And the current second draft a 7? 8? 7 and a half? I have no idea! I’m pretty happy with it, moreso than any story I have, but it still definitely needs more work. Speaking of which…

7.) What aspect of your draft needs the most work?

I’d say the worldbuilding. Which is usually my answer for all my stories. Worldbuilding is my weakness. In BT, the fae especially didn’t get much in the way of details. And the world itself could use some more history and explanation. But each time I work on it, it gets more and more detailed. So, hopefully, by its next few drafts the worldbuilding will be much more detailed and rich. One can dream anyway. Right? Yes? Maybe?

8.) What do you like the most about your draft?

The characters! And I will repeat myself and say that’s usually my answer for all my stories. *grins* Where I lack in worldbuilding, I think I make up for in character building. I could spend all my life creating characters. People is my specialty. How they think, why they do the things they do, what makes them tick. Just…PEOPLE. I love ‘em! And I do so love my BT cast. From sweet, talkative Rose, to the broken Dragon, to the impish Larke, to the bratty and ridiculous Marigold. Even Anya, in all her wickedness, found her way into my heart. I cannot wait to start editing again just to destroy their lives more spend more time with them. Ahem, yes.

9.) What are your plans for this novel once you finish editing? More edits? Finding beta readers? Querying? Self-publishing? Hiding it in a dark hole forever?

Which may also include hiding in a dark hole forever. #TheWritersLife

10.) What’s your top piece of advice for those just finished writing a first draft?

EAT CAKE. Because, hello? YOU JUST WROTE A FIRST DRAFT YOU MAGICAL LITTLE BEAN YOU. You deserve alllll the cake! And enjoy the cake and relax because you also need to TAKE A BREAK.

In my experience, writing a first draft drains one’s creative juices to the dregs. Editing takes a lot of energy. If you’ve already used up your energy, and have just spent so much time creating your baby, you’re too close to it and drained to properly tear it apart. Taking a good long break (I’m talking a month or longer) is crucial. Once you’ve stepped back and refilled your creative barrel, you can look at the draft with fresh eyes and renewed energy to make the changes it deserves.

I’m very much learning taking a break from things is one of the most important aspects of the writing life. (As long as you do eventually get back to things. Breaks that go on for too long can actually be damaging, too. It’s all about balance!)

*looks up at all my goals and hopes and plans* Well, well, well. It looks like 2017 is going to be quite the year. I’m daunted, but also super excited. Now that I’ve had a proper break, I’m finally feeling ready to really get back into it and get serious with my writing! (See? Breaks are magical things.) I don’t know how much of this I’ll actually accomplish this year, but I am determined to do what I can. I may do another proper Goals for 2017 post later once I’ve gotten my brain back in order and everything more officially figured out. Since I’ve been on break and out of town I’m trying to ease myself back into things right now. BUT I AM EXCITED. And I think 2017 will be a good year. Let’s make it one, shall we?

How is 2017 treating all my dears thus far? What’s your biggest goal (writing or otherwise) for this year? What have you been up to lately? Let us chat about all the things! I HAVE MISSED MY PEEPS.
Posted by Christine Smith at 10:01 AM 29 comments: