But my brain refuses to produce even vague ideas for blog posts.

But I do have a blog.

If my brain ever cooperates.

Hey, that last one wasn’t quite as short.

I shall consult my brain to make more interesting, less pointless posts next time.

Have a great day!

Except it’s actually evening where I am right now.

Email ThisBlogThis!Share to TwitterShare to FacebookShare to Pinterest
Labels: Blogging

My little sister’s mind probably looks something like a tornado made of bright rainbows. Her creativity has no bounds. So, often, when I get writer’s block or need ideas or inspiration, I consult Miss Rainbow Mind herself. She’s my own personal idea dispenser. 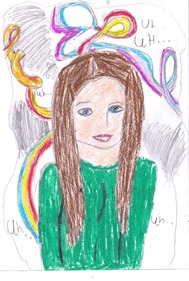 Thus, when I’ve been having a severe amount of blog post writer’s block but have been desperately wanting to post regularly, who do I go to for ideas?

One day we were sitting in the car and I looked around for the button upon my idea dispenser. I must have pushed the wrong button though, for the ideas that popped out were…different, to say the least. Not exactly topics I would be interested in writing for my blog, but entertaining nonetheless. We sat there for probably 15 minutes laughing hysterically at all the random ideas she kept producing.

So what was suggested that I should blog about from probably the most random person on this earth? Well, let’s see…

-Purple Squirrels with polka dots (To which she claims runs her mind.) 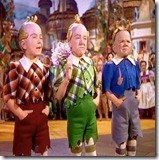 -Jerry Maren (Who apparently was a munchkin in the Wizard of Oz. How she knows this? I have no idea. She always has random trivia like this.)

-Robert Clark (Some random guy from a show she likes.)

-The grass and how green it is (and how brown it is.)

-The moon (What would I write about it? It’s round an

-Ants (I am no scientist, what would I write about them?)

Things like this kept coming and coming. It was very entertaining, but nothing quite hit me as something I would blog about. Although street signs and mailboxes are exciting things, don’t you think?

After a while of this, it hit me. She had provided me with a blog post idea. In a very round about way, but a post nonetheless.

My little sister’s mind is always…interesting. Random. Crazy. Amazing. And as I like to say, all around epic. But mostly just random. *cough, cough* But that’s why we love her!

And who knows, maybe someday I will write about one of those things…