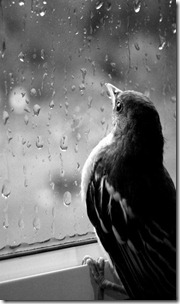 I’m thankful for the pattering of raindrops on my window.

I’m thankful for siblings who never cease to make me smile.

I’m thankful for those random memories that make me burst into laughter in the middle of the night.

I’m thankful for the clacking sound of keyboards.

I’m thankful for rainbows that remind me that storms can turn into beauty.

I’m thankful for the magical smell of books.

I’m thankful for the ever going music birds provide for the outdoors.

I’m thankful for the cozy smell of coffee. 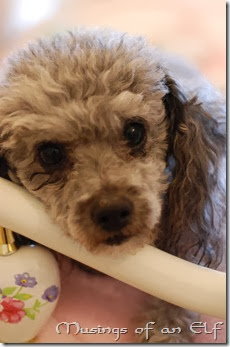 I’m thankful for those quiet moments where nothing happens but daydreaming.

I’m thankful for the way cats purr when you pet them. 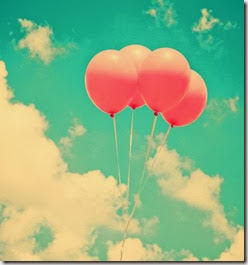 I’m thankful that God made the color pink. 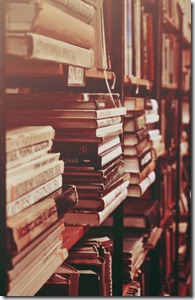 I’m thankful for the sound of crunching leaves on Fall walks.

I’m thankful for pointless conversations with loved ones.

I’m thankful for the sound of rustling leaves in the wind.


This year I’ve learned to be thankful for all the little things in life, because what would life be without all the tiny things that make us smile? In the end, they’re not little things at all but what makes life beautiful.

But, above all, I’m thankful for the very biggest thing.

What Jesus did for me. Hope you all have a very Happy Thanksgiving!

Don’t forget, there’s always something to be thankful for. 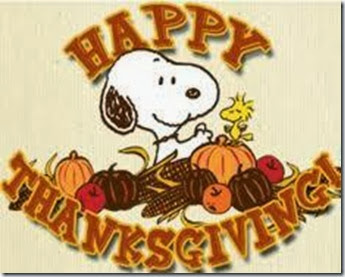 I lost my mind.

100,000 words were hit today. Hit my life right off a cliff. My sanity was already down there, of course. Sometimes I lean over the cliff and wave at them fondly.

Then I go back to writing.

Because I’m not finished yet! I made my goal of doing a double NaNo, but I also had a goal of writing at least 2k words every single day of the month. And I’ve got 9 more days of that. But now it’s not a matter of getting the words, instead it’s just trying to make it to the end of the story, which is rapidly approaching.

Wow. Only 9 days left of NaNo. Can you believe it? We’re almost to the final week.

My characters have really made some leaps this week. Darven and Leiden actually started being. . .friendly to one another! It’s a miracle! Most of their conversations end up in misunderstandings, or arguments, or your full out screaming match. I blame Darven, since, you know, it’s basically his fault. Leiden is always trying to be friendly, but Darven doesn’t exactly make friends. But then the unthinkable happened. Leiden joked with him, and Darven joked back. It took my by such surprise I just had to sit back and grin at the screen for a while.

And then it happened again. And again. And next thing I knew, they weren’t two people forced to commune with one another. Slowly, but surely, they’re becoming brothers. They’re learning to trust one another, rely on each other. I mean, let’s be real here, they still argue, a lot. But the arguments usually end in friendly banters. As if I didn’t already love these two enough! *huggles them*

Yep, I’ve come a long way with these two. Our journey is approaching its end, which kind of makes me sad, but I’m sure they’ll stick in my head and banter away with all the other characters who refuse to give me peace. Plus, they’ll return in the last couple of books of this series. And let’s not forget rewrites. Actually, let’s do. I don’t want to think about rewrites right now. . .

I just hope my life is okay down at the bottom of that cliff. 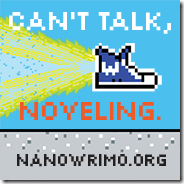 Favorite Writings of the Day:

A new noise alerted everyone to the doorway. Scuffling and screams echoed from the hall. A knight appeared, clinging tight to a girl writhing in his grip.

"Lord Reziq!" the knight cried, struggling to keep the girl constrained. "I found her sneaking through the halls. Shall I throw her in the dungeon?"

The girl settled, taking in everyone in the room. She and Darven made eye contact, and her face drained white, most likely from his expression. He could feel his blood boiling.

If they got out of there alive, he was going to give Leiden a long lecture on falling in love with foolish princesses.

Something Makes Me Think I Should Be Writing


We have made it, people! We have come to the halfway point. Half of NaNoWriMo is behind us!

By this time, a lot of us are experiencing the “halfway point blues”. The thought that we still have a whole other half of a month to go is a bit overwhelming. Let’s not look at it that way though. Instead, we should be saying we only have half a month left! We should be looking at all the words we’ve already written, thinking of all the accomplishments we have made.

Just half a month left! Don’t give up! Write those beautiful words! 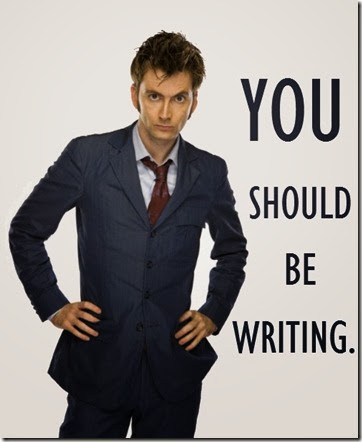 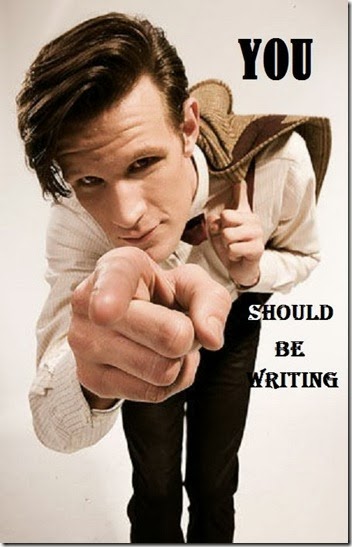 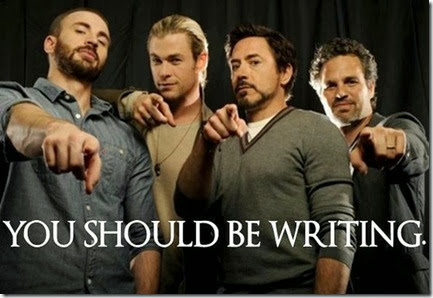 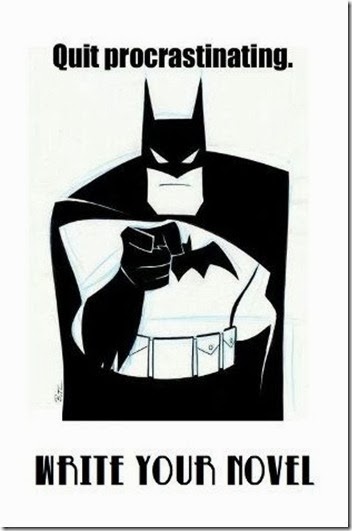 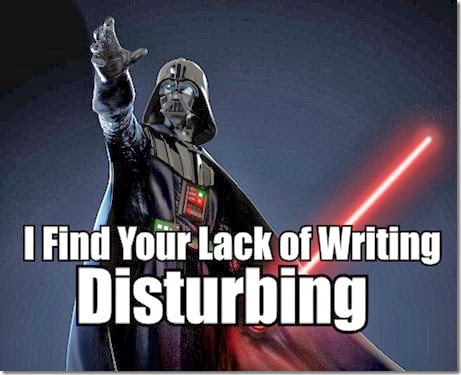 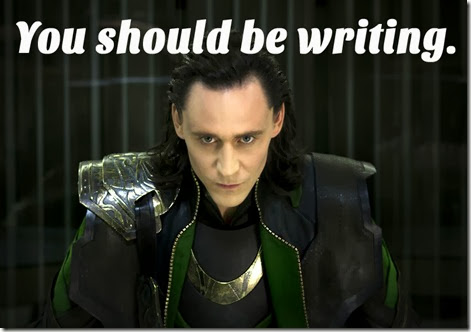 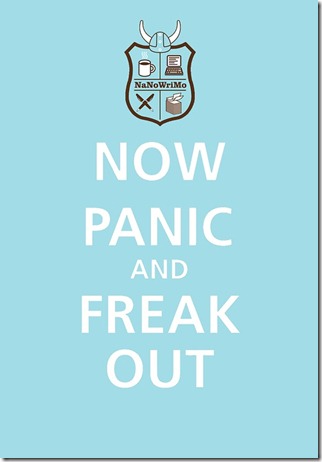 Favorite Writings of the Day: (Because I have actually been doing it. . .some. . .)

Chaos ensued above. Looking up, Darven could see a searing stream of flames shooting out just above the hatch. Shouts and screams of men resounded across the field. A roar pierced the air. More flames appeared, followed by pained shrieks. Then a scaly tail swiped over the exit. Loud pounding and rumbling noises shook the walls. Then silence.

The only noise to be heard was the heavy, alarmed breathing of the children as they all looked at each other wide-eyed. Slowly, Darven ascended the rungs and examined the field. Smiling, he looked back down at the others.

"Our rides have arrived. Come on, we better mount quickly." Climbing the rest of the way out, he moved around a burning corpse to greet Barveris. He wrinkled his nose. The whole field reeked of burning flesh and freshly spilled blood. "You sure do make a mess."

The dragon gave him a gentle shove with his wing.

Email ThisBlogThis!Share to TwitterShare to FacebookShare to Pinterest
Labels: Colors of a Dragon Scale, NaNoWriMo, Writing

The Insanity Sets In


So, we’ve survived the first week of NaNo! *cheers*

We have survived, haven’t we? It is debatable.

Well, maybe not “living”. Because my NaNo has emphatically told me that it wants to live thus I must give up my life for a month for it.

I am so bad at winning arguments.

Every waking hour (and sometimes non-waking ones) has consisted of NANO. Not that I’ve let it affect me. Nooo. I’m still peeeerfectly sane!

While brushing my teeth I sing parody songs to my characters in my head.

Hey, I just create you,
And this is crazy,
But here’s my NaNo,
So help me maybe?

(Disclaimer: I have never even heard the full version of Call Me Maybe and never, ever plan to, but it is so amusing all the parodies you can make [or have already been made] with those lyrics.)


Every time I close my eyes I see my characters.

The NaNo Waltz has been going round and round my head.

I thought death had found me Wednesday when we had no milk to make a cappuccino with. 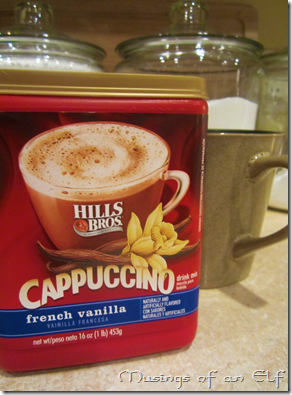 Because I, sadly, do not drink coffee, this is my substitute. I suck it down like there’s no tomorrow during NaNo. But no milk to make one with? Could there be more tragedy?!?!

I’ve been grinning wickedly at the discovery that Darven is highly fond of name-calling:

"What's a rat smelling dark elf like you doing this far north anyway?"

"Where is that troll brained elf?"

“If Reziq or any of those other goblin faced Ordeth inhabitants haven't strangled him yet than I'm going to the second I find him."

What was that foolish elf doing now?

And it may amuse me a teeny tiny bit over how often he refers to Leiden as a fool. Ahem.


All day every day those two are arguing in my head. And not just with each other, with me as well. Darven informed this morning that I’m a terrible author to have. ALL I was doing was pronouncing his name in a really exaggerated southern accent and laughing at how silly it sounded. I’m not all THAT terrible. Psh.

Which may have beaten my record of 9 days. Which may have happened during my first NaNo. After which I maaaay have vowed to myself to never, ever go that crazy during NaNo again. Not that I’d ever break a promise to myself. . . 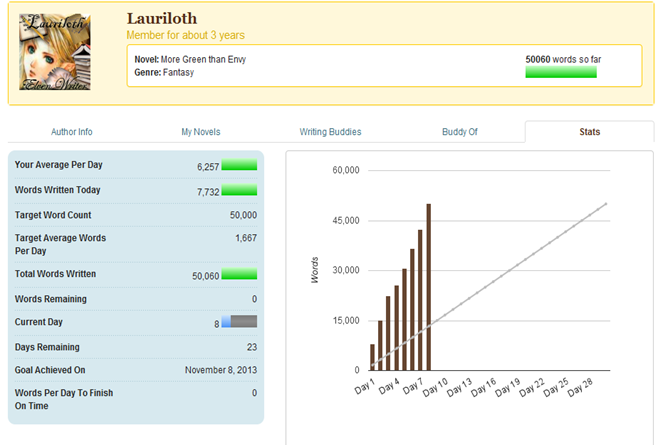 Yep, this NaNo has absolutely, definitely, not even slightly, at all, in any way stripped me of my sanity. Not it alllll.

*Cannot come up with title because NaNo is strangling me*

So you know how I’ve mentioned before that I have OCD tendencies? (At least I’m pretty sure I’ve mentioned that. . .) I can get awfully obsessive with things and go a little, erm, overboard. Well, let’s just say when it comes to NaNoWriMo those OCD, obsessive tendencies rev up tenfold.

Yes, that wordcounter is right. I’m halfway to 50k just 4 days into NaNo.

I feel horrendously guilty if I’m not writing at every single waking second. Even right now something keeps screaming in my mind, “What are you doing? You shouldn’t be blogging! Go write your NaNo!” It doesn’t help that I keep setting these huge, ridiculous goals for my daily wordcounts and refuse to go to bed until I make them.

In my defense, I am shooting for a double NaNo instead of 50k. So to make it to 100k I do need to be writing a whole lot, I should just. . .maybe take a break from it now and again. But you know what? I’m sort of having a blast.

It was a bit of a struggle the first day of NaNo, but once I really got into the story I’ve been enjoying every minute of it. I’m sort of in love with Leiden and Darven. It's highly amusing watching impulsive, naive, happy-go-lucky Leiden and intellectual, quiet, melancholy Darven try to work together. They make quite a pair. There’s never a dull moment with those two, that’s for sure. Not to mention Leiden’s flighty (no pun intended) dragon and Darven’s hot tempered one. Between the four. . .well, it’s not boring anyway! XD

So, all in all, despite NaNo taking me captive and enslaving me, everything is going extremely well! I’m looking forward to the weeks to come! I doubt my characters are though. *cackles*

How has the first few days of NaNo been going for you?? I’d love to hear about everyone’s NaNo 2013 beginning adventures!

Off to continue writing!

Favorite Writings of the Day: (I did this for the last two NaNos, may as well continue the tradition!)

“And we don't even know if they're the ones that took Princess Iraila!" He started at this thought and jumped to his feet. Pressing himself against the bars, he squinted out, eyeing each cell in front of him.

A snort came from Darven's cell. "Don't you think she would have informed us if she was in here?"

Leiden slowly lowered himself back to the floor. "Oh. Right."

"Besides, I already looked into every cell when they dragged me down here. We're the only prisoners."

"So we've basically figured out nothing?"

"Basically. And now we're imprisoned because someone had to get himself caught."

Leiden sighed, making circles in the dust on the ground with his finger. "I was just trying to help," he muttered.

(Things may be a wee bit tense between them right now.)