I have felt really bad that I have not written anything in ages. I did not know what to write about. Well, I finally have something to write. And it is quite something.

As you probably know, tornadoes have swept across a good bit of America causing destruction in their wake. Over 100 have hit, causing terrible havoc and damage. Entire neighborhoods are nothing but rubble now and many lives were lost. We had are own bit of destruction.

Wednesday, April 27th, it was a somewhat stormy day, though I had no idea a great tornado was rushing towards us. That evening, our mom told us we needed to come downstairs. I did not think the weather was that bad, it was really just kind of rainy, but it was a good thing I came. About five minutes after we congregated downstairs, our ears started to feel this really deep pressure in them, like we were going up a mountain. We all huddled in a little hall under the stairs, which seems to be the safest spot in the house during storms, and then, around 6:30 that evening, it came. As the pressure in our ears just grew worse and worse, this large swooshing noise sounding from outside, loud and terrifying. We huddled there with fear as a great tornado rushed past our house. We could hear its destructive power and even feel the floor vibrating. It was a terrifying moment, but it truly only was just a moment for it came and gone in seconds.

My older brother and I got up to look out the back window and were surprised at the mess it made. We had no idea. Our dad told us to look out the front, and so we did. It was a most shocking sight. Our entire front yard was completely destroyed. We live out in the country surrounded by trees, but every big tree out there was on the ground. There was so much destruction it was hard to take it all in. Our fence was a bit torn, we had no clue what happened to the trampoline for it was no where in sight, fallen and broken trees covered the entire area, we had a tree house that is now a pile of broken wood, it was shocking. The worst part was that our long driveway was completely and utterly covered with trees piled up very high, so much that it was impossible even to walk to it. There was no way to get out if we needed to.

Within seconds our front yard turned from this- 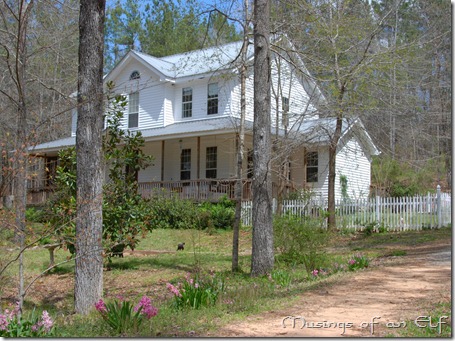 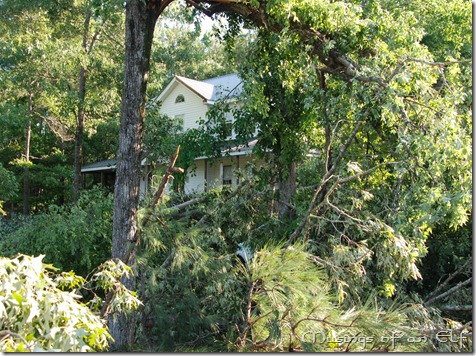 While this used to be my window’s view- 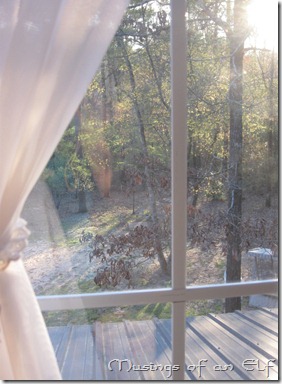 I now see this- 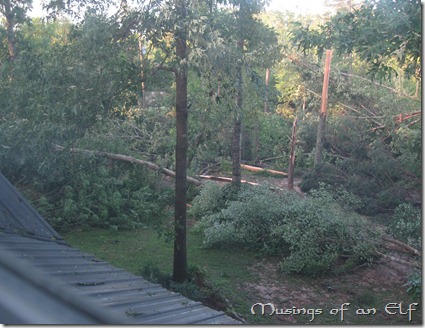 The most amazing thing, though, was that the house really got no damage. A screen porch on the side got a bit torn and a small bit of siding came off the house, but other than that it stayed perfectly intact. Not even one window busted. My Paw Paw (my dad’s father) is quite the carpenter and actually built the house some years back. I have to say, he really did a wonderful job!

The other amazing thing was our van. Right in the midst of all that destruction it sat, most would think it would have been totaled. 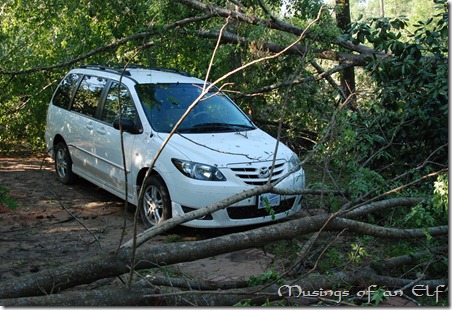 Trees surrounded every single side of it, yet not even the faintest of scratch can be found. The trees were literally inches away from it, but it still stands in perfect condition. My dad’s truck was also fine. The Lord really took care of us!

Where we live there is family—grandparents, cousins, uncles and aunts--all around us within walking distance. We were terrified some of them may have gotten hurt after all that. Unfortunately, there was of course no power, no phone service, and our cell phones kept going dead when we tried to call. But it was nearly impossible to get anywhere with all the mess. Somehow, my dad and brother hiked and climbed through all the trees, brush, and rubble, with a bit of drizzling rain making their climb harder, to go see if everyone was all right. Amazingly, everyone was. We even had a cousin in a trailer and he was fine! There was tons of destruction, but no one was even injured.

The next morning was beautiful. It was amazing to see the blue, blue sky and sun shining after all the destruction of the previous night. It was also much cooler than it is normally this time of year, making the work everyone was going to have to do much easier. It was going to be a busy day. We knew we were going to have to have a clear driveway. If there was any form of emergency we would not be able to get out. Most everyone else, though had great destruction around their house, still was not quite as far down in the woods as we were and could get out. We, on the other hand, could barely leave the house. Thus the work began. Paw Paw, being a carpenter, has all sorts of tools for situations like these, so if something like this had to happen to us, we were certainly blessed. It was amazing. Dozens of people came to help clear away the driveway, family, friends, and, strangely, others no one even knew who were. Something that I suspected would take about three days to clear, was cleared out by two o’ clock that day! There were so many hands helping, it took no time at all and we once again had a driveway.

But there was still havoc everywhere.

My Maw Maw and Paw Paw’s (my dad’s parents) house got a couple of broken windows and most of their chimney tore off. The biggest thing that got destroyed was their garage- 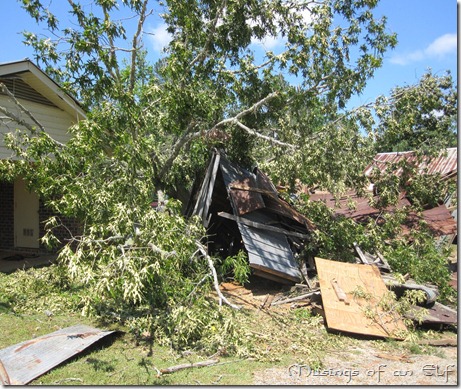 A rather large tree fell right on top of it. Thankfully, it did not fall on the house! The house is on the left there, so, as you can see, it was very close. The garage falling is a bit of a joke now though, for my Paw Paw planned on pulling it down anyway. He got saved some work.

A cousin of mine and his girlfriend were in a trailer near Maw Maw and Paw Paw’s house when it happened. It is a complete miracle they were okay- 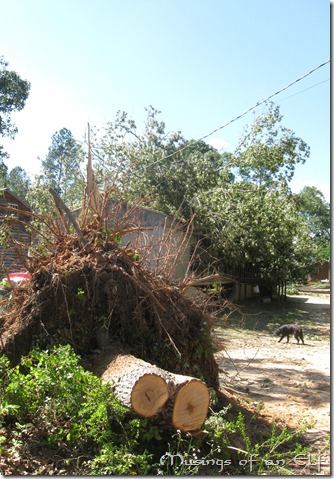 A tree fell on it, the back is greatly torn, yet they were perfectly fine.

One of my great uncles was in a very old house which got some really bad damage, even the roof in the bathroom was torn off, but he was fine. 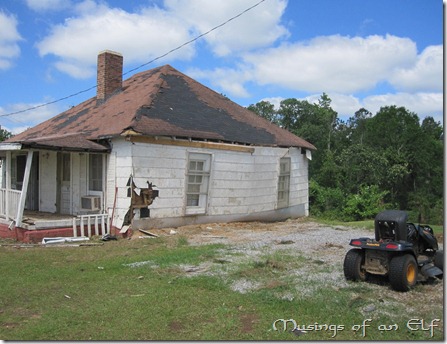 Some other cousins’ house got deeply destroyed- 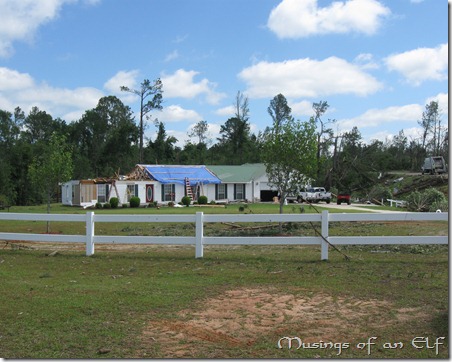 Out of everyone around here, they seemed to have gotten the most damage. The back is torn, the inside is ruined, it is unlivable. Yet, again, they were all perfectly fine.

It amazes me how something so quick could cause so much damage. We all saw that God is most definitely powerful, but it also showed He is merciful and loving. From no tree falling on our house down to not a single scratch on our van, I saw how amazing he really is. He truly loves us; more deeply than any of us can even fathom.

No matter how terrible, how destructive, how hopeless, how dark things may seem, the Lord is always there. He is shining His light upon us, and, no matter what happens, I know He is caring for us. Even after the storms swept through and it seemed all was lost, God showed us His light and the hope, mercy, and unfathomable love he brings.

Over all the destruction His light shined down on us; a promise of His love. 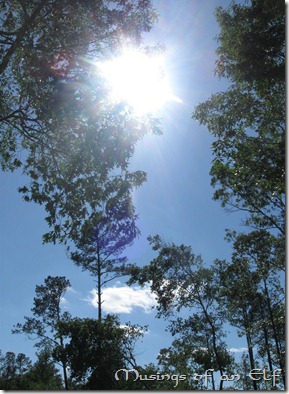 Posted by Christine Smith at 2:23 PM No comments: