You are a fine word. There are many uses for one such as yourself. Adjectives have a high ranking in our English vocabulary and you have proved yourself as one of the best.

But I think it is time we part from one another.

Yes, dear Slightly, it is true. As I edit my book, I find you scattered all across the pages. Paragraph after paragraph, sentence after sentence, there you are, often multiple times. I do not know if it is you or I. Is it my own lack of ability to use other words to describe my sentences, or have you grown arrogant, demanding you be overused? Perhaps it is both our faults. Either way…this must end.

There are other words that need love, too. You cannot let your synonym family waste away and feel alone as you clutter the page with your own self. Somewhat, Vaguely, Faintly…these are all members of your own family who have been abandoned.

I must replace you, dear Slightly, with others. There is no other way.

It is not all your fault though. I, myself, grew very fond of your useful ways. But I am afraid it got out of hand. You are everywhere, to such a point that my eyes have grown tired of the very sight of your eight letters pushed together all across my pages. This must end.

Please do not be mad. Do not abandon me completely. I promise you will find a place across my pages where you will be loved. I know you wish for many places but it cannot be so anymore.

I fear this is the end of our many times together.

The Dragons of Chiril Book Review 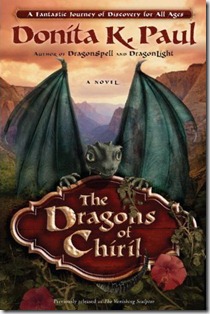 Synopsis
Tipper is a young emerlindian who’s responsible for the upkeep of her family’s estate during her sculptor father’s absence. Tipper soon discovers that her actions have unbalanced the whole foundation of her world, and she must act quickly to undo the calamitous threat. But how can she save her father and her world on her own?

The task is too huge for one person, so she gathers the help of some unlikely companions—including the nearly five-foot tall parrot Beccaroon—and eventually witnesses the loving care and miraculous resources of Wulder. Through Tipper’s breathtaking story, readers will discover the beauty of knowing and serving God.

Summary
The Dragons of Chiril is an allegorical, Christian, fantasy novel and the first book in The Chiril Chronicles trilogy written by Donita K. Paul. This story was first published as The Vanishing Sculptor, but later rereleased as its current name, The Dragons of Chiril.

This story is set in a fantasy world with all kinds of unique races and creatures. You have emerlindians, o’rants, mariones, tumanhofers, kimens, and that only includes the human-type races. Not only this, but with odd fruits, strange names, new kind of trees, and even peculiar bugs much different from those on Earth, the reader really feels as if they are in an entirely different world. Donita K. Paul does an absolutely stunning job with her world building. Again though, the types of races and way the world works is not explained much in this book, most likely making some readers that have never read The DragonKeeper Chronicles somewhat confused. Also, you will find a few familiar and lovable faces from the DragonKeeper series in this story.

Donita K. Paul probably is one of my most favorite authors. Not only can she make interesting races and an astounding world, but she weaves together a very entertaining story. Her books are not dark nor dramatic, you’re probably not going to find yourself crying or upset, most likely you will be laughing throughout the book instead. There is one word that explains her writing: Witty. Her stories are so very, very witty. And just downright fun!

When you have conversations like-
“Absurd bits of absurdity.”
”Nonsensical bits of Nonsense.”

Or comment such as-
“It’s starting already. Lost a memory. Next it’ll be something I really value…like my hat.”

Or a chapter called “Baa!” and the next “Baa-Baa-Boom!”

You know it has to be a good book!

Plot
The story is set in the continent of Chiril where a young lady named Tipper and her grand parrot guardian, Beccaroon, are trying their best to maintain the upkeep of Tipper and her parent’s great estate, for her father mysteriously disappeared many years past and her mother is in an unhealthy state of mind. With no means of money, Tipper has no choice but to sell her father’s famous artwork. She has no idea what a mistake this is.

Her father now returns after so many years, with a strange old wizard and librarian with him. Tipper is thrown into chaotic confusion as these three men attempt to explain to her that her father’s life as well as the balance of the entire world lays upon three of her father’s statues, three statues which she had sold.

This group of peculiar ones are forced to set off on a quest to find the three statues. Unfortunately, this is no walk in the park.

Evil forces stand in their way while the world itself is going into disarray…all because of three missing statues.

All the while, the questers are learning of the almighty love and power of Wulder, the God figure of this beautiful, allegorical tale.

Characters
I am not even sure I can express in words what a fantastical ability Donita K. Paul has with weaving characters. I can go on and on and on. The characters of her books are ones that make you laugh and smile as you turn every page. Her characters are unique, and that is an understatement. She also usually throws in lots of them, keeping the story interesting and all the more fun. Yet even with so many running around the place, no two are the same.

The main character in this particular story is Tipper (don’t you love her name?), the strong-willed heroine who, though is stubborn and often makes mistakes, tries to do right. “Excitable” and “Tenderhearted” is what one of the characters always refers to her as. Most of the story is from her point of view, but the readers do often get a peek through Beccaroon’s eyes, a near five-foot tall parrot who is determined to stay dignified and regal no matter the circumstance, yet has a deep love for his ward, Tipper.

Many others fill the story with fun and intrigue, including a crazy wizard who thinks far too much of his hat, a renowned artist, a prince of dragons, four little dragons as well as big, and more.

One of my most favorite characters was Tipper’s mother, Lady Peg. Her mother is a bit…erm…out of sorts I suppose you can say. I love her because everything that comes out of her mouth is utter, hilarious nonsense. In most books, having a mother with a confused mind might be portrayed as sad and depressing, in this book it is humorous and fun.

For example, one conversation of Lady Peg’s goes-
Lady Peg’s husband: “I know, dear one. But someday your father will relent.”
Lady Peg: “He never will. I don’t think so. Not at all. As I understand it, he will have to lend us something first, and then that something could be re-lent. As it is, he’s never lent us so much as the time of day, and he can’t re-lend that even if he had the first time, because lending the time of day is such a confusing trial. Trial and error, you know. Error always comes with the trial of lending the time of day, and the clocks are never at quite the same time after that.”

Didn’t I tell you her writing was humorous? Nearly every page is filled with conversations such as that and ridiculous comments from the bizarre but lovable characters.

Out of all the books I’ve read, Donita K. Paul’s is my number one vote in unique characters. Her stories are worth reading for the characters alone.

Other Material
So we have a great plot, humorous characters, and incredibly witty writing, what else does the author bring to us? A lovely way to share the love and care of God, yet in a way that is easy for everyone to understand without sounding preachy.

In the land of Chiril no ones knows of the Creator, Wulder. When Three of the characters come to Chiril from another continent, Amara, they spread the word, bringing the knowledge of Wulder to this land. The way she told the tale in this fashion made me smile. It was beautifully done.

One thing I do question in these books is the use of magic. I usually try to stay away from magic, especially in reading. This world focuses a lot on magic, but the thing is that it is a different world where things would work differently, and the characters often thank Wulder for their abilities. This particular book does not have nearly as much magic as The DragonKeeper Chronicles, which focuses on it immensely. The main source of magic use is one person, and he does not do spells often. Still, I am not entirely sure where I stand on this. But I will not go into all my personal beliefs now. It is still a lovely book.^^

Appropriate Ages
I believe Donita K. Paul writes for a younger audience more so than older teens and adults. Like I have said, her stories are full of fun and humor. There are some battle scenes and deaths, but she rarely goes into great detail, and everything is always kept so light that you barely think much of the unpleasant stuff.

It is hard for me to say if adults would enjoy this book as well, because I, myself, still enjoy Dr. Suess books and fairytales. Hehe. So I am not the greatest judge on such things. I think they will though. I honestly believe nearly every age can enjoy her books.

I’d say probably around 10 years old and up for this one, though perhaps younger depending on the person.

Conclusion
This book brings lightheartedness and smiles to its reader. Unique characters, an interesting plot, a fantastical world, and a hunger for more—The Dragons of Chiril has it all. For a fun read I highly recommend it.

I very much look forward to purchasing the next book, Dragons of the Valley!