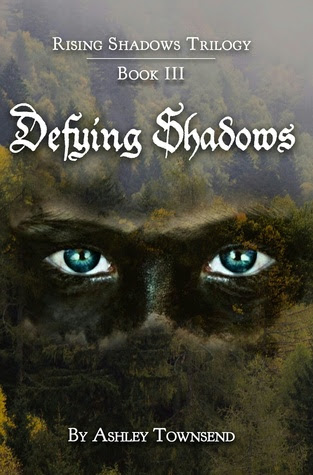 One choice can define your future.

At first, Sarah’s return to twelfth century Serimone is as wonderful as she could have hoped—reconnecting with Will and celebrating the union of her two friends—but things quickly fall to pieces when she uncovers something that could unsettle the new regime. Before she can share this information, Sarah is forcibly whisked away by the one man she thought she’d never see again: Damien Lisandro, the friend who betrayed her and the traitor who was supposed to spend his life behind bars. Even more unsettling is the revelation that the mystery they had solved is far from over as a dead man comes back to life with the intent of corrupting the future.

In Will's desperate attempts to find Sarah, he uncovers the mystery that she left behind, putting into question the kingdom’s past and the motives of its current king. But the madman whose mission it is to change history will stop at nothing until he succeeds, and a team of ragtag time travelers are the only ones left who can stop him.

As this exciting chapter of her life nears its end, Sarah must finally choose between Serimone and her world—between the easy choice and the right one.

Can I just leave the review at that? I don’t feel like anything else needs to be said. Okay, fine.

Defying Shadows by Ashley Townsend is the 3rd and final installment of the Rising Shadows trilogy. (I also reviewed Rising Shadows, the 1st book, and Chasings Shadows, the 2nd.) And what a finale it was! Once I finished the last page, I just had to sit there for a minute so my tornado of emotions could have some quiet time and calm themselves down. 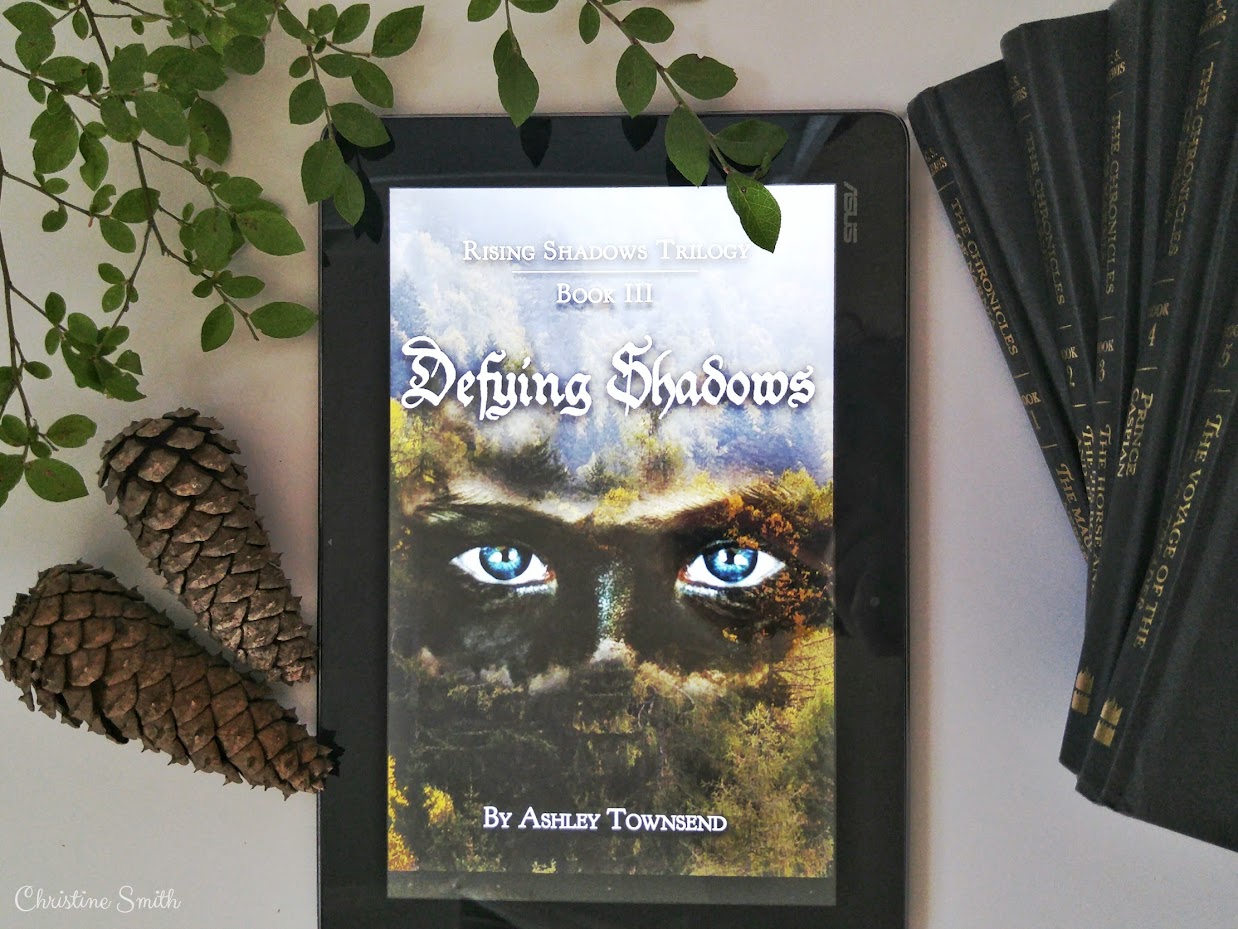 These stories are about Sarah Matthews, a 21st century gal who got swept into the 12th century by accident by some time traveling watches. In the first two books, she landed in a place called Serimone, and made quite a few friends and enemies along the way. And then of course our dear love interest, Will. In this 3rd story, she’s returned to the 12th century for a wedding, only to discover her enemies are back and the future of Serimone could be entirely destroyed.

The story starts out with a timey-wimey bang that totally had me reeling. Just give me ALL the time travel-y things, please and thank you! Unfortunately, once the exciting, wibbly-wobbly prologue is over, the rest of the beginning is sloooow. There were a lot of scenes of just dialogue and normal, every day activities like getting dressed and fixing hair and whatnot that seemed like it could have been cut or broken down into just a sentence or two instead of entire paragraphs. I had a rather hard time getting through the first few chapters. Nothing really…happened. BUT I didn’t mind much because I was so very happy to return to these characters.

All of our beloved characters are back, and it was like being reunited with dear friends. Sweet Sarah, precious Will, spunky Karen, the whole endearing Jones family, and, of course, Damien. Sweet, sweet, loveable, if not slightly deluded, Damien. . . Ahem. There’s also a little gaggle of side character, all of which made me smile. Well, you know, except the villain, to whom I wanted to punch in the face. But that’s normal…right?

What I love about the cast is how real everyone felt. They’re all people, with hopes and dreams and fears and doubts. Their emotions jump from the pages and squeeze your heart until you just want to hug everyone, and wish they were your friends in real life.

The best part about the characters was how they had grown and changed from the first book. With each book, they endure more, grow closer, become braver. The 2nd book especially had some of the best character arcs. And the effects are still there in this story. I can’t stand when a story ignores the character growth that happened in a previous story, and the characters revert back to their original selves. If there’s character growth, I want to see them changed permanently. And Defying Shadows had just that. These characters are much more mature and brave and selfless people than they were in the 1st book. The consistent character growth made me want to high-five the book and give it a gold star.

And, better yet, we get even more character arcs in this one. The characters just keep growing and growing and excuse me while I go cry and hug the book because MY PRECIOUS BABIES. This author is a master at character arcs, let me tell you! 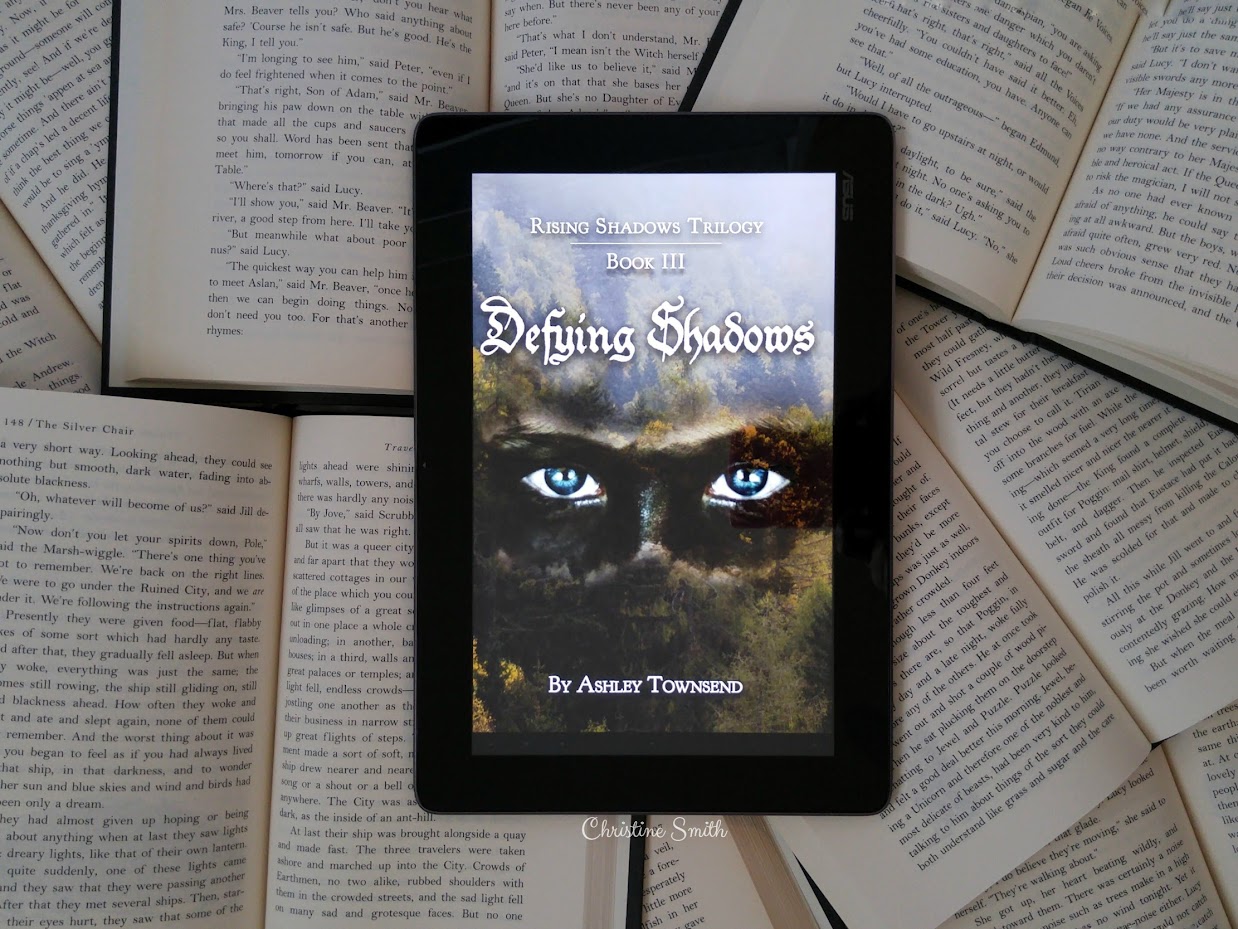 Once we get past the slow beginning, things really start to pick up and the plot thickens. We only thought things were dire in the last book. Haha. HAHAHAHA!

The stakes have upped, and Sarah is thrust into a much deeper plot than she ever imagined. The layers of plot throughout the trilogy were phenomenal! I was blown away with how the plot was layered on thicker from the 1st book to the 2nd. And even more so with the 3rd. Now the plot comes fully revealed, and what you might think is insignificant in one book, plays majorly in this one. Some seeerious plotting  by the author must have gone on for this trilogy, because it was amazing seeing the plot grow and grow, one layer at a time, building up upon one another.

Also, the Robin Hood legend is a particular little subplot for these stories and there was one Robin Hood-y reveal in this one that made me squeal and want to jump up and down and huggle the book. But, of course, spoilers. You’ll just have to read it! *cackles* BUT ROBIN HOOD, PEOPLE.

Now, I will say, sometimes the plot got pushed to the background in favor of character relationships. But that’s okay. I may have noticed it more because I tend to read much more plot focused books vs. character centered ones. Sometimes this felt more like a romance story than an adventure, time travel tale. Which, again, isn’t a bad thing! It’s just not something I read much of. But watching Sarah and Will’s relationships develop and grow turned me into a fangirling mess, and I could happily read about these precious babies forever. I mean, a 21st century college freshman and 12th century blacksmith together. ALL THE CUTE.

But, despite the relationships taking center stage, there was still plenty of action to be had. Particularly some timey-wimey stuff I’ve been waiting for since basically BOOK ONE that finally happened and SQUEEEEALS. FUN THINGS. (But I’m trying to not talk too much about the plot so as not to spoil this book and the previous two. *zips lips*) 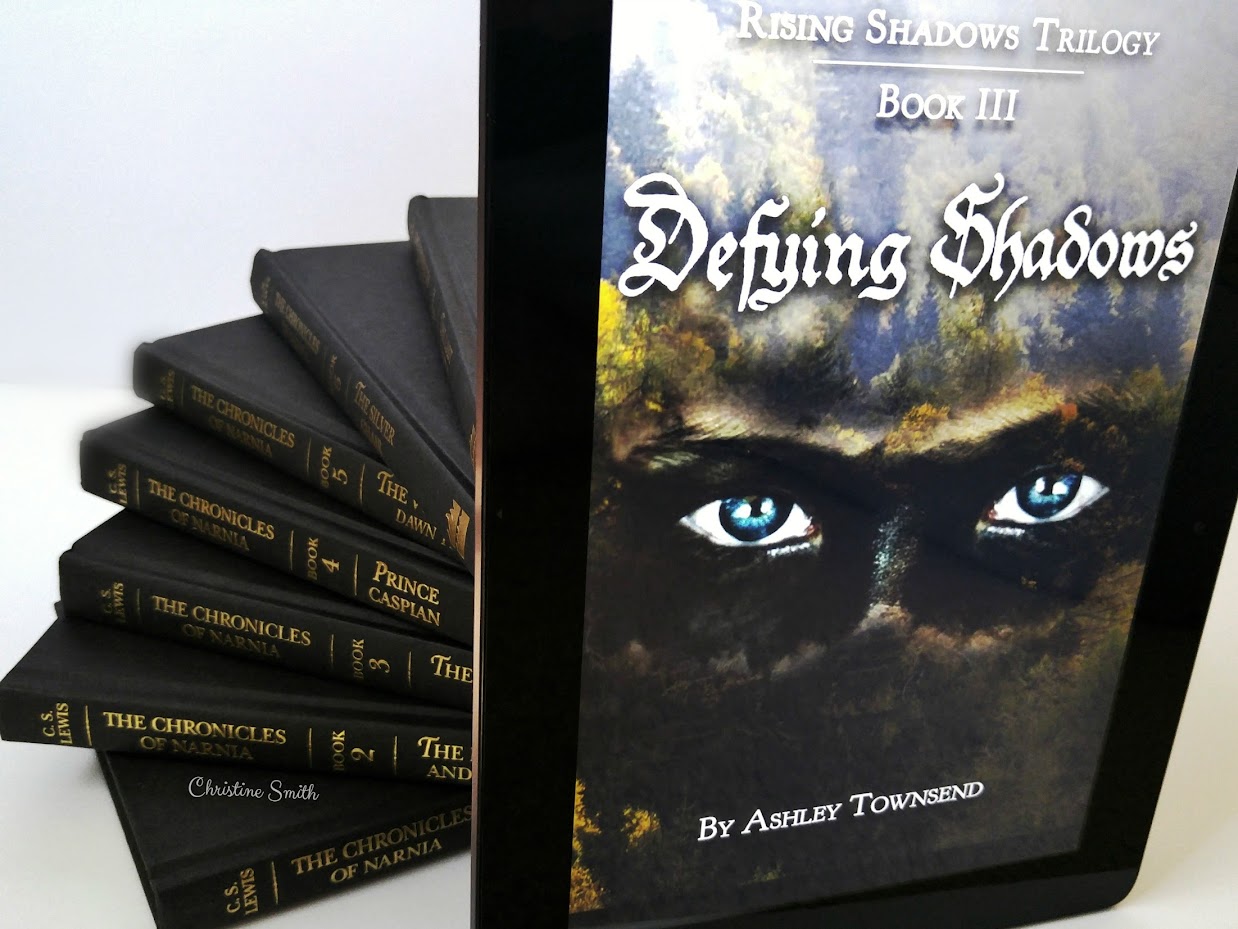 In addition to loveable characters and a fun plot, the writing is wonderfully done. Ashley Townsend had talent from the beginning, and her skills have only grown. The story was smooth and beautifully written. And the EMOTION. I’d say that’s Townsend’s strong suit. Tearing us readers apart with allll the feels. Only a special few books can make me feel this strongly, and the Rising Shadows trilogy are among them. This finale especially! The author has a way of describing scenes that puts you there and makes you FEEL the scene. I knew precisely what each character felt, and could see it perfectly by the brilliant descriptions of the character movements. I never once questioned what was happening or what I supposed to be seeing, because the descriptions brought it to life so perfectly, most of the time I forgot I was even reading. I felt like I was Sarah or Will or Damien or any of the other characters because the emotions were so strong. My breath quickened, my heart swelled, tears pricked my eyes. LITERALLY ALL THE FEELS. And I think you all know by now how much I loooove when books make me feel. So I was a happy (if not ridiculously emotional) little bean while reading. (No, that is not a contradiction. Fangirls LIKE when books destroy us. I DON’T KNOW WHY.)

I also really liked all the quotes at the beginning of each chapter. It’s so fun when books do that—give us a great quote that’s a little hint as to what the chapter will be about. And let me just applaud Townsend for all these quotes that so PERFECTLY went with each chapter! I can’t imagine how long it took to find each one. o.O

These are YA books, but I’d say for a bit older YA. There are some heavy themes within.

There’s some mention of a woman who sells herself, though of course it was only mentioned, never ever shown or dwelled on. And told very much in a bad light. We also have a royal scandal from the past mentioned that involved intimacy out of wedlock. At one point there’s a party with some alcohol, though the main characters don’t drink any that I can remember. Someone drops a key into their cleavage. Another time a guy is shirtless and a girl stares at his form.

Since the stakes are so high, there’s definitely violence. Mostly just revealing the after effects of fights, such as bloodied bodies and such.

The big thing is there’s lots of passionate kissing and touching. Nothing beyond kissing, but it’s very…strong kissing. And much of it. So if that’s not your thing, be warned.

This is a Christian book though. So most bad behavior is pictured as just that, immoral behavior. (Except none of the characters had any problem with passionate kisses so, again, that’s up to you whether you’re okay with it or not.) There are some beautiful messages throughout about forgiveness and God’s love and giving our lives over to Him, no matter how messed up our pasts are. Each message never felt forced, but beautifully woven within the story. And yes, totally had me tearing up. *sniff, sniff*

I very highly recommend reading the first books before this one (particularly book 2), but once you do you’re going to be desperately getting your hands on this one. And, trust me, you won’t be disappointed.

This book felt real, the characters were loveable, the plot all manner of fun, and the EMOTIONS. I was honestly a sobbing mess by the end, and I usually don’t do more than shed a tear while reading, if even that. I’m having the hardest time saying goodbye to my beloved characters. But it was a beautiful conclusion to a spectacular trilogy.

Also, there was a horse named Darth Vader in the 12th century. YES. YOU NEED TO READ THE BOOK.

Have you read any of the Rising Shadows
books? Have you read THIS one??? BECAUSE
I NEED TO FANGIRL HERE. Do you enjoy
time-travel/historical fiction stories?

Posted by Christine Smith at 12:01 PM