It’s my favorite time of the month: Beautiful People time! And this month, in honor of Valentine’s Day and us writers’ inability to avoid shipping our characters no matter how hard we may try (you know it’s true), our hosts Sky and Cait have cooked up a delicious couples edition of BP! Twirl on over to Sky's post or Cait's to snag the questions and linkup. (And I don’t know why you need to twirl. I guess because people like to twirl when they’re in love and it’s Valentine’s. . .? Just pretend with me that it makes sense, okay? Okay.)

(And if you’re new to the word “shipping”, it’s usually a fangirl term for wanting two people to have a relationship and live happily ever after. It has, in fact, nothing to do with pirates. Unless you’re shipping two pirates together, but that’s neither here nor there.) 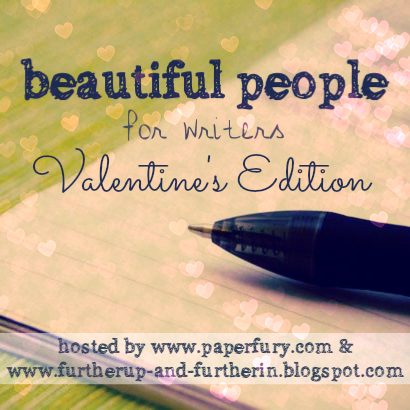 I’ll admit, this edition threw me for a loop a bit. Because, honestly, I don’t really have any couples! Or not officially yet. I have a ton of characters that will probably become couples later in the book/series/what-have-you but I’ve barely written much romance. I have nothing against romance. In fact, I enjoy a touch of romance in stories. I just never seem to get that far in my books. The most romance I’ve ever written is in Burning Thorns because, well, it’s a Beauty and the Beast retelling. Romance was kind of necessary. But I actually already did Rose and Beast in a similar BP post last year. It seemed a bit redundant to do them again.

But before Rose and Beast ever existed I had two characters in another story that have been my favorite “couple” of my characters for years, even if they’re not officially a couple yet. . . (Rose and Beast are now trying to become the favorite. It’s a constant war in my mind.) So today I shall be answering the questions about them.

Meet Eryth and Airen from my Colors of a Dragon Scale series (which is the series I always write for NaNoWriMo). Eryth is a soft-spoken dragon rider, and a half-elf. Airen is a jester. Just kidding, he’s actually a crown prince that would totally be the class clown should he live in modern times. I actually did a BP post for Eryth a few months back. And Airen deserves one someday because, well. . . Just because. (I won’t admit he’s one of my favorite characters. I won’t.) All their friends and family know they’re going to be together someday, even if they don’t. . . 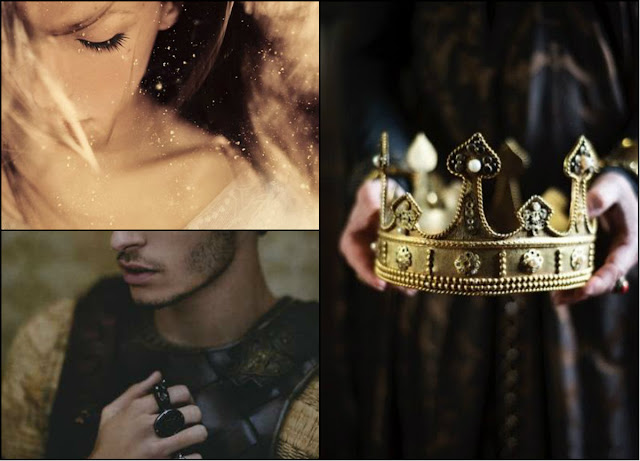 1. How did they first meet?
After her husband died, Eryth’s mother came to live in Airen’s kingdom and got a job in the castle. Eryth was only a baby at the time and Airen just 2 years old. Airen’s sister, Iraila, was also a baby and she and Eryth were raised together so Iraila would have a companion. Thus they never exactly “met”, they were pretty much raised together almost like siblings.

2. What were their first impressions of each other?
I think little toddler Airen was excited to have another squishy baby in the castle to play with. Baby Eryth cried a lot when this crazy toddler constantly tried to pick her up. Ah, romance.

3. How long have they been a couple?
Since they were babies. Obviously. I mean, they basically have an entire kingdom shipping them!

Okay, okay. They’re in their twenties and still not a couple. It’s ridiculous. Eryth doesn’t think she’s worthy enough to be with a crown prince and would never take the initiative. While Airen may pretend to be cocky and the “ladies’ man”, deep down he doesn’t feel good enough for someone as perfect and sweet as Eryth. Also neither are aware of the other’s feelings, especially since they grew up together and often have a brother-sister thing going.

Obviously we need a tragic, deadly situation to make them open up to each other, don’tcha think? *grins*

4. How committed/loyal are they to each other? Would they break up over a secret or a disagreement? Could stress drive them apart? Would they die for each other?
Loyal? Well. Airen actually is a ladies’ man, not to mention the crown prince. Basically every girl in his kingdom throws herself at him, but he never lets any potential matches last because, you know, they’re not Eryth.

One time when they were younger Airen teased Eryth and threatened to put a spider down her back. She cried. Their other friend Bryth punched him. It was a good time. Ahem. If they were ever going to break apart it would have been at that moment, but they didn’t. Eryth is usually too tenderhearted and Airen too laid back to let disagreements get in the way of their friendship.

Also they would die for each other so fast it sometimes scares me.

5. List 5 “food quirks” they know about each other. (Ex: how they take their coffee, if they’re allergic to something, etc….and feel free to mention other non-food quirks!)
Wow, this is a really hard question. Especially for a medieval fantasy. I also created these characters years ago when I was still figuring out the whole writing thing, so they’re not as in depth as more recent characters.

Eryth knows Airen is a little too fond of sweets and sometimes sneaks some under the table at feasts to eat later in his room that night. (He doesn’t want to stuff his face and look like a pig in front of his people after all. That’d be un-princely.) Sometimes he’ll give Eryth some because she gets too nervous to eat at big social gatherings. He believes food is a very important part of life.

Um. . .she knows his arrogant demeanor is really just him joking around. While he completely believes she’s far braver than she thinks. Those aren’t really quirks though. . . This question is hard! But that’s what I love about BP, it gets me thinking about these things.

6. Does anyone disapprove of their relationship?
Um, no. Like I said, most of the kingdom (except I guess the eligible maidens) wants them together. Airen’s parents, the King and Queen, love Eryth like a daughter. Iraila would be thrilled to have Eryth as an actual sister. It would be a delight to Eryth’s mother. Eryth’s father was a great elven warrior and she was chosen as a dragon rider, which is a huge honor, so despite what she believes she’s completely “worthy” to marry a crown prince and become queen one day. There’s literally nothing stopping them besides their own insecurities. *rolls eyes* Something needs to give them a shove. (Like their entire world being wrought and destroyed in war. *cackles*)

7. What would be an ideal date?
Airen absolutely loves when Eryth lets him ride on her dragon Neriin. (He may or may not be a little bitter he wasn’t chosen by a dragon.) He’d love a thrilling ride across the countryside together. Although she’d probably just want something as simple as a long, quiet walk with him.

8. What are their personality dynamics? Similar? Contrasting? Do they fight a lot or mesh perfectly?
Her timidity and his playful arrogance are way too much fun to write together. Though they’re pretty much polar opposites, they actually bounce off each other wonderfully. Eryth keeps him grounded and focused on the important things. While he helps her conquer her shyness and insecurities. It took them a while to get there though. The spider incident wasn’t the only one. He was a total joker when he was young (who am I kidding? he still is) and it took some time for him to realize making Eryth cry isn’t actually fun at all. Hearing her laugh is a thousand times better. Over the years he morphed from being a teasing older brother type to having a strong desire to protect her.

9. What have been their best and worst moments together as a couple?
I guess I haven’t really gotten to that in the series yet. There’s one more book to go, it’s gonna happen! I suspect best moment will be when they actually realize they are a couple and have been since they were like toddlers. XD Worst will probably be seconds before that when I put them into some sort of deadly situation that forces them into admitting their love for one another.  *smile, smile*

10. Where do they see themselves and their relationship in the next few years?
Eryth sees him marrying some amazing princess while she regrets never telling him how she felt and having to accept the fact that she wasn’t good enough.

Airen sees them happily married with like ten children. Ya know, once he figures out how to admit he’s loved her since they were tiny.

Hey, the question asked how they see themselves in a few years, not what actually happens.

There you have it. Airen and Eryth. And yes, sometimes I want to throw them together and scream, “KISS ALREADY.” But it’s hard when they’re like four kingdoms apart from each other right now. The world has to be in danger and they have to be heroes. Psh.

What do you think, guys? How do you feel about shipping your characters? Do you ever want to yell at them to just get married and live happily ever after already? Annnd, just ‘cause, how do you feel about Valentine’s Day? (I’m indifferent to it myself. I don’t hate it, don’t really like it either. It’s just there. *shrugs*)

Posted by Christine Smith at 8:44 PM