Sleep? That Exists in November?

words before I went to bed. I managed it, not easily, but it happened.

I got a later start than I would have liked today, wonder why? *coughity cough* But I had an ideal day for writing the entire time. A lovely Fall day, the house entirely to myself, and my characters screaming at me to really get them going. So I wrote and wrote and wrote and managed to end the day with 7,052 words. My goal was at least 5k today, so I am quite pleased. I was secretly wishing that maybe I would push myself to 10k because last year I made it to 9k the first day, but that is not happening. It is days like this that I wish more than anything I liked coffee. Sleep beckons. Boy does it beckon. 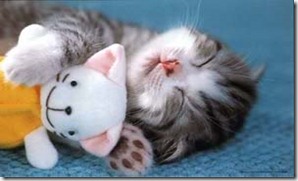 Huh? What? Ahermher. Where was I?

I will probably not write that much for the others days except for maybe an occasional one here and there. I just like to go all out the first day. It especially helps because it gives you some room for breaks and a little bit of a cushion for those days that you cannot find time to write or your muse is just refusing to flow.

As far as my story, it is going all right I suppose, except I’ve used “upon” probably 30 times so far. It is worse than “slightly.” I’ve thanked myself a thousand times today for making an outline. I don’t know what I would have done if I hadn’t. O.o Better not to think about that.

My characters are not behaving themselves very well at all though. They are not being nearly as nice and considerate as I would like them to be and they are annoying me to no end. I’ve never had characters behave so badly before. But, alas, such is the life of a writer. There are always going to be some. I am only two and a half chapters in, so maybe they will straighten themselves out in the days to come. Otherwise, I fear I might have to do something dreadful to them…I do hate torturing my characters. I can be such a pushover as far as they are concerned. Tsk tsk.

Despite the characters’ behaviors, today has been quite a success. I look forward to the rest of the month!

Favorite Sentence of the Day: (This idea just popped in my head, it might be fun to do during the month.)

“He looked down at his own dragon but the bright pink scales nearly blinded him worse than the midday sun.”

Oh, did I forget to mention my characters have pink dragons?

Posted by Christine Smith at 12:25 AM