{Book Review} The Stroke of Eleven by Kyle Robert Shultz 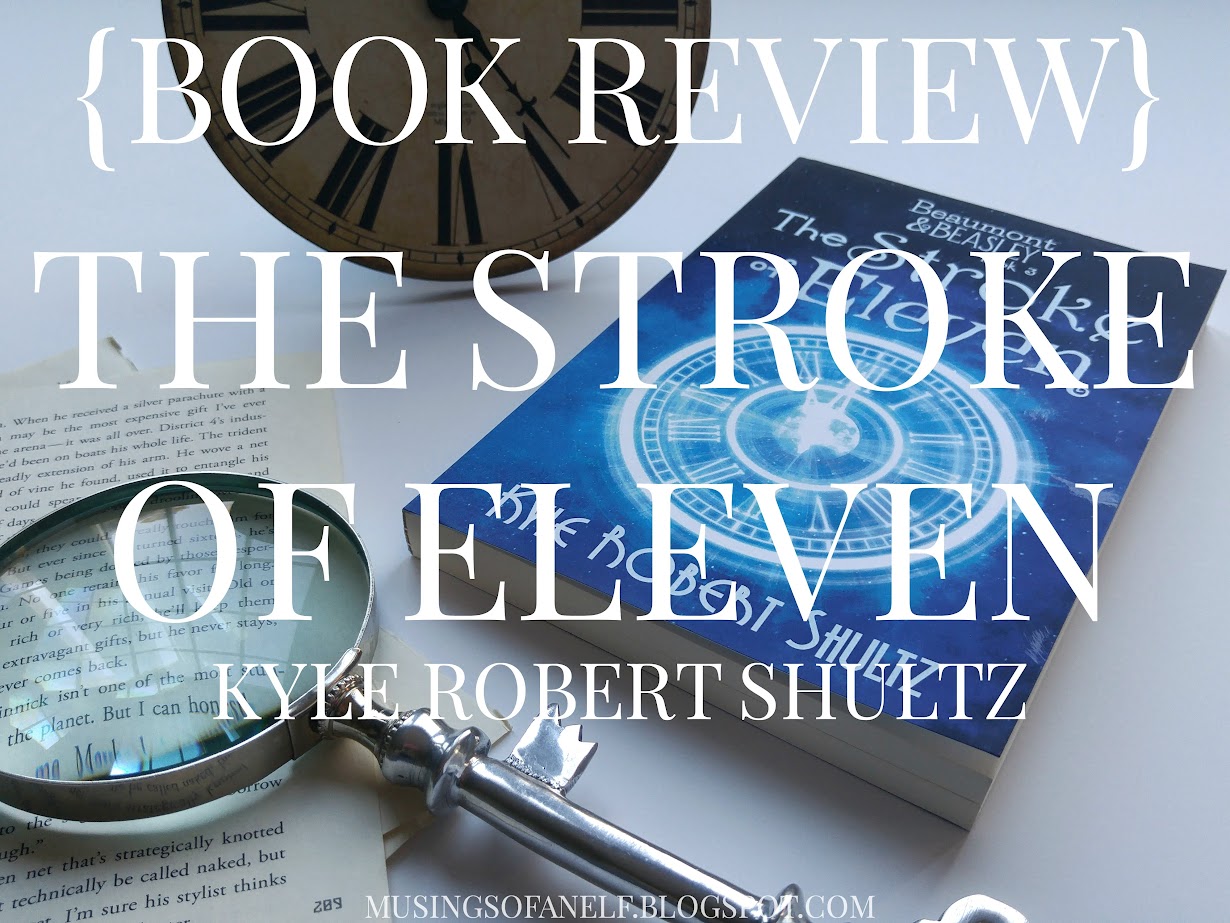 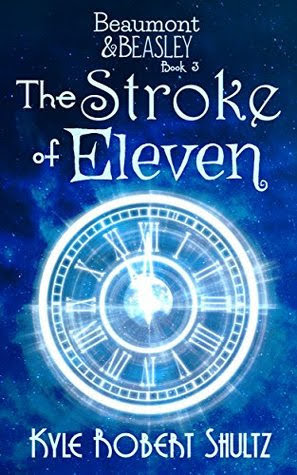 The adventures of Beaumont and Beasley are at an end.

The Council of Scions has finally caught up with Nick Beasley and his friends—and the sinister enchantress Madame Levesque has plans for them. Nick and Cordelia must solve an ancient mystery for her. Otherwise, Crispin and Molly will be lost forever.

The investigation leads Nick and Cordelia to the Castle of Basile, a bizarre place detached from space and time. Old friends are trapped there, and Nick and Cordelia are soon imprisoned along with them. Their jailer is the Fairy Godmother from the tale of Cinderella…who turns out to be far less benevolent than the storybook version.

A masked man offers to help—but can the White Rabbit really be trusted? What is Cinderella’s dark secret? And what will happen when the clock strikes twelve?

I think the best way to describe my feelings about this book is SKDLJFLKJDS:LFJL:DSKJ:LFKJ:DLSKJF:LKJDS:LFJKSLDKJ!!!!!!!!!!!!!!!!!!!

Okey doke. Now that we have that established…

The Stroke of Eleven is the 3rd installment in the Beaumont and Beasley series, of which I’ve been screaming to you guys about since I read the 1st book back in June. BECAUSE I LOVE THIS SERIES. (You can read my review for the first book, The Beast of Talesend, HERE. Annnd I realize I didn’t actually do a review for the 2nd one, Tomb of the Sea Witch, because I faaail at book reviews. Well…JUST READ IT. IT WAS EPIC. It involved an Antihero Magic School, mermaids, a DRAGON(!!!!), and a band of “mythfits”. <--- Boom. A review. I’m amazing.)

This 3rd book may be my favorite yet. I DON’T KNOW. They’re all so good! But where the first two (the first especially) was more on the lighthearted side, this one took the feels to a whoooooole ‘nuther level and just… *collapses* THIS BOOK, GUYS.

Where The Beast of Talesend was a Beauty and the Beast retelling and The Tomb of the Sea Witch The Little Mermaid, The Stroke of Eleven is a Cinderella retelling. (Though with these books I use “retelling” loosely. They’re more…fairytale continuations-ish?)

I’m aware there are like 293982 Cinderella retellings out there, but, personally I neverrrr get tired of them. And this one took the events and made them so, so epic. Trust me, you’re gonna love it! And, again, it’s not really a retelling. More like the events after the story of Cinderella happened. In a sense.

ANYWAYS. Nick, Cordelia, Crispin, and Molly have finally gotten captured by Madame Levesque. To keep Crispin and Molly safe, Nick and Cordelia must go to this mysterious, phantom castle for Levesque and do what she asks. Once there, things start getting even more dangerous than they realize. *cue complex, epic plot things and FEELS*

The whole gang is back. I’d say Nick and Cordelia were even more spectacular in this one. The things they had to do and experience added a whole other level of depth to their already amazing characters and brought them closer and skdljflskjdfs. I CAN’T WITH THESE TWO.

Crispin was of course the BEST. As always. Except there was sort of a sad lack of him in this one. Still, the scenes we did get with him were fabulous. Molly, too, wasn’t present for a lot of it. But there was one scene in the beginning with her that made me crack up and love this sweet girl even more.

The Mythfits are back!!! Which I was so ecstatic about. I was worried they were just going to be in The Tomb of the Sea Witch and that be it. But nope! They were a very big factor in the plot of this one and it made me ridiculously happy.

ALSO MALCOLM. This cranky, shapeshifting dragon becomes even more epic in this installment. Every time we get a taste of him and his backstory, I want to know mooooore. I find him one of the most intriguing characters in the Afterlands. PLUS HE’S A DRAGON SO THERE’S THAT.

We also have new additions. Like the White Rabbit who was soooo mysterious and cool! And Cinderella and the Prince themselves! I. LOVED. THEM. The Prince had me cracking up. Kyle is the best at flipping over cliches and surprising you with the characters. Cinderella was a sweetie, which I was so glad of! The tenderhearted, nice Cinderellas are always my fave. I seriously adored both of them!

Basically, the whole cast is perfection and I am so attached to these people, it’s probably not even healthy.

Um…everything? Seriously, there was just soooo much epic stuff going on in this book! But there are definitely a few things that literally had me shrieking with excitement.

- IT’S TIMEY WIMEY. We’ve got time travel and time loops and time staying still and just…TIMEY WIMEY THIIINGS. Which is my faaaavorite. I can’t even express how ecstatic I was when I heard this book was full of convoluted time travel-y things. One of my favorite story aspects in one of my favorite series? YES PLEEEEEEEEEEASE!!!

- ALICE IN WONDERLAND THINGS. So the other books have had hints of some Wonderland stuff going on. But this one dove right into it with the addition of the White Rabbit and some other stuff. And and and AAAAAAHHHHHHHHH!!!!!!!!!! You all probably know how unhealthily obsessed I am with all things Alice in Wonderland. I was literally whisper screaming over certain parts and at each and every nod this had to Wonderland. IT MADE MY WONDERLAND-LOVING HEART SO HAPPY. I cannot waaaaaaaait to see where all the Wonderland stuff goes in the rest of the series.

- The Castle of Basile. Trying to avoid spoilers here, but the mystery involving the castle and the way it worked was SO. FUN. Everything was just so funnn!

- The humor! Kyle’s specialty. And despite this book being more feelsy, there was still pleeeeeeenty of humor to go around. Basically every other line is quotable. I was laughing so much!

- THE FEELS. When I wasn’t laughing, I was wanting to cry. Because ACK. And yes, this is a positive. GIMME ALL THE FEELS. I looooved how this story got way deeper and more feelsy than the previous installments. Humor and feels—precisely what I look for in novels!

- PLOT TWISTS. Plot twists eeeeeverywhere!!! This story had me reeling right and left. I just love how much deeper and complex this story took everything! I’m so anxious to see how everything continues to play out because EEEEP. ALL THE THINGS.

I need to stop or this list will go on forever. But like I said, I LOVED EVERYTHING.

Seriously, I’m trying really hard to think of something I didn’t enjoy, but I’m coming up with nothing. I guess there were some events I was suuuuper nervous about. But they actually sorta turned out better than I hoped. Though I won’t know the full outcome of Certain Things until later books. So it’s sort of like a…half complaint but not really because I don’t know how things will turn out?

Wow. That made zero sense. It’s hard reviewing a 3rd book of a series because SPOILERS. Anyways! I really just loved everything. 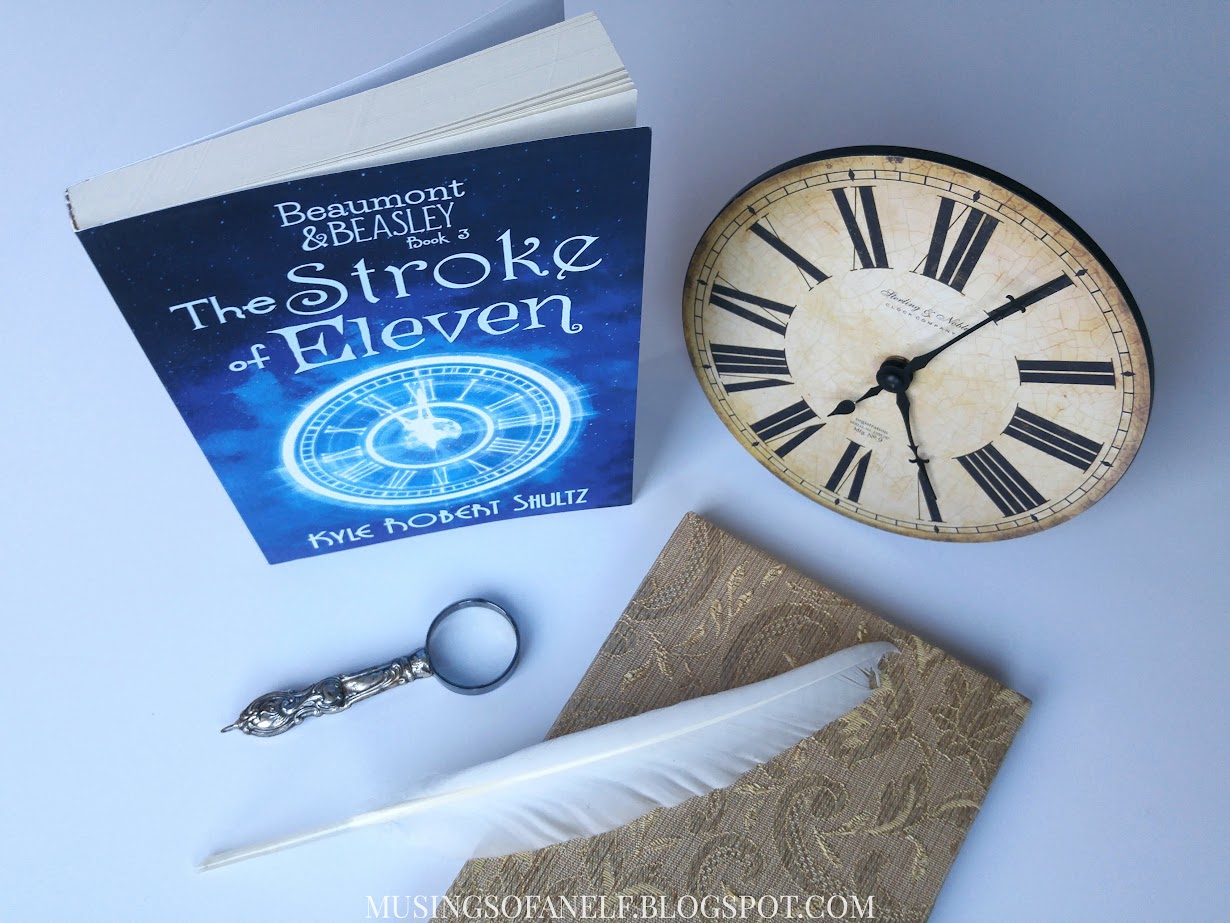 Nothing, really. Though this one was more feelsy and complex, it still kept to the clean style all the others books have run. Lots of magic and fantasy things with a few fights, but descriptions of gore is down to a minimum.

Though, there were a few instances where characters said “Oh my God” or things like that. Which I realize everybody in the universe and their cousin’s talking dog uses that term like 300 times a day. But…I just am not a fan. I hate how we now use God’s sacred name so lightly over eeeeverything. But that just may be a me thing. And it wasn’t used much in the book, only a few times that I can remember.

Other than that teeny tiny thing, it was perfectly clean. I highly recommend for ALL ages!

Between the feels, deeper plot, timey-wimey things, Alice in Wonderland threads, and twists around every corner, this 3rd book may top as my favorite Beaumont and Beasley novel yet!

If you’ve read The Beast of Talesend and The Tomb of the Sea Witch, YOU NEED THIS NEXT BOOK ASAP. And if you haven’t, what is wrong with you???? Go immerse yourself in the delight that is the Beaumont and Beasley series! Fairytales, humor, endearing characters, 1920s-feel world, epic plots, and all manner of twists—IT’S JUST THE BEST.

HAVE YOU READ THE STROKE OF ELEVEN??? If so, I need you to fangirl/boy with me! If not, goooooo! NOW. (Just read the first two books first because this one will make zero sense if you haven’t…) And do you enjoy fairytale crossover stories? (I’m obsessed.)
Posted by Christine Smith at 11:18 AM