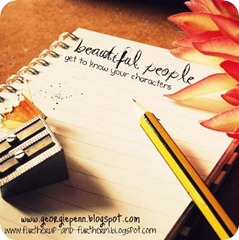 This month’s version of Beautiful People, put on by bloggers Sky and Georgie, is a special edition centered around our villains.

You probably know the drill, but Beautiful People gives us ten questions to answer about our story characters. You can find an FAQ here if you so wish.

I’m really excited about this month’s special questions because I never really get to know my villains as well as I’d like. They’re always quiet and mysterious and never seem to want me inside their heads…silly people.

Anyways, today I’m going to use Vithen. He is the main bad guy of a long series I’m writing. Half of the time I never know what he’s planning, so perhaps I can get into his head a bit more now.

Vithen is a rather young dark elf prince who killed his father to take the crown and rule over their land. Now he’s secretly causing all sorts of havoc all across the world. He’s not a very pleasant guy, let me tell you.

1. What is their motive?
I’ve never exactly been good at the whole thinking up complicated motives for my villains thing, a severe weakness for me. Thus, Vithen’s motive is simple: All out power. He wants to rule the world. So original, right?

2. What are they prepared to do to get what they want?
Vithen has been planning for years and years. He takes everything slow and precise, never rushing into anything. Ruling the entire land has probably been something that has gone through his mind since a child. Thus, he’s willing to do absolutely anything to achieve his goal.

3. Are they evil to the core, or simply misunderstood?
Vithen is quite the evil one, I have to say. He cares about nothing but power. He even killed his father to gain power. It is his only true desire.

4. What was their past like? What about their childhood? Was there one defining moment that made them embrace their evil ways?
Being a dark elf isn’t exactly an easy life. The race is most corrupt. Not only that, but Vithen was born into the royal family as crown prince. He was raised in a corrupt land where things such as killing is acceptable and sometimes even rewarded and power is everything. Being brought up this way, Vithen really just knows no different way of life. He got the taste of power at a young age and couldn’t get enough of it.

5. Now that they're evil, have they turned their back on everyone, or is there still someone in their life that they care for? (Brother? Daughter? Love interest? Mother? Someone who is just as evil as they are?)
Vithen is so secretive, I just never know about him. I’m pretty sure he really just cares for no one. I have yet to figure out who his mother is, and there is a chance he truly did love her. There is also this one girl, a lackey of his, that cares for him, but I do not think he returns it in any form or fashion. Feelings for people doesn’t really go through his thought process.

6. Do they like hugs?
Ahahaha. No! I don’t think Vithen would take well to a hug. As in…you’d probably find a knife in your back if you tried it.

7. Are they plagued by something? (Nightmares? Terrible thoughts?)
One of the main characters, Bryth, is somewhat of a thorn in Vithen’s side. They grew up together and detested one another. Bryth eventually went her own way and became good, and will soon cause ol’ Vithen quite a bit of trouble. Other than that, he seems to be a pretty content and confident fellow.

8. Who are they more similar to: Gollum or Maleficent?
I ‘d definitely have to say Maleficent. Vithen isn’t really like Gollum in the least.

9. If your villain could have their choice of transportation what would it be?
Well…he’s currently working on getting some dragons on his side…

10. If you met your villain in the street, how afraid would you be? Are they evil enough to kill their creator?
I’d be utterly terrified. Well…after the exciting shock of the realization that I just ran into one of my story characters. Once that passes, I’d probably run for my life. Vithen doesn’t like me one bit…he’d very happily kill me. Especially once he finds out how the story ends. Hehehe…

Posted by Christine Smith at 6:04 PM