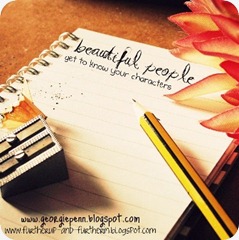 Here I am, doing Beautiful People once more, a thing put on by bloggers Georgie and Sky for learning more about your story characters. This month’s questions can be found here or here.

This time though is special, because it’s apparently BP’s 1 year anniversary!

For this edition, everyone is answering the first ten questions about two different characters who have a relationship of some form (siblings, friends, enemies, romantic, etc.) with an extra five set of questions at the end about their specific relationship.

Trying to decide on a single character for this is hard enough, but now two…well…not an easy task, let me tell you. After weighing out so many characters, I’ve finally settled on two of my favorite, Nehthin and Lisseria, both from an Arthurian Legend series I’m working on.

1. Do they believe in anything that most people think is impossible?
I think Lisseria definitely does. I would consider her a bit of a dreamer. I wouldn’t think it would take much to convince her of impossible sounding things.

Nehthin has been a bit forced to live somewhat out of the norm, so I think he does as well. Plus, if he doesn’t believe at first, it does not take a whole lot to convince him of things.

2. Are they strong, or the "damsel/knight in distress" sort?
Lisseria can shoot a bow better than most. She’s had a fairly hard life and has had to learn how to take care of herself in times of trouble. Though she does rely rather heavily on her brother and a handful of other loved ones, she’s not exactly one anyone could consider a “damsel in distress.”

Nehthin cannot wield a blade to save his life, literally. He’s a bit of a klutz and really does not have very many skills. He does care about people though, more than anything. If someone is in danger, he’ll do anything he can to save them.

3. Do they have a special place? (e.g. a corner in his/her bedroom, under a tree...)
Lisseria spends most of her days hunting and loves to be in the woods. It’s where she goes when she’s upset or just needs to be alone.

Nehthin was on the move his whole life until very recently, so had no such pleasure of a special place. He now has a cave under Camelot castle he visits where he secretly cares for a batch of dragons alongside Arthur Pendragon.

4. What occupation do they have, or plan on having?
Lisseria is the court’s huntress. She goes out and hunts meat for the castle’s kitchen staff as well as occasionally selling some game to the butchers.

Nehthin has been hired as the court’s messenger. He spends his days traveling around Camelot city taking messages from person to person.

Both enjoy their jobs thoroughly, though Nehthin’s clumsiness and tendency to easily forget things makes his a bit difficult at times.

5. Describe their current place of residence.
Lisseria is housed in a nice room right in the castle of Camelot where she is practically treated as a courtier.

Nehthin has a room in the castle as well, but not many would consider it “nice.” It’s a small, cluttered room, not very well suited for anyone. Though having never had a real roof over his head his whole life, Nehthin honestly is perfectly content with it.

6. Explain their last crisis. How had they changed when they came out of it?
Save for the past few years, Lisseria’s life has never been easy. Her younger sister died of sickness and she had to watch both her parents be murdered right in front of her. After that, she and her older brother were forced to flee their home and live in the woods for many years.

Despite all the tragedy, Lisseria has always held on to a happy-go-lucky lifestyle, keeping everything on an optimistic viewpoint. She mourns for her family members, but she’s turned around the tragedies she’s faced and used it to drive her to help others who have suffered. Because of everything she has been through, she now uses her life helping the ones who suffer by the same hands of those who killed her parents. Caring for the needy is a salve to her heart.

Nehthin is very similar in his tragedies and how he handles them. His father died when he was only six years old and his mother has passed away recently. He is now trying to build a life for himself and, though the pain is deep, does as Lisseria and keeps things optimistic. Tragedy is just something he has had to deal with all throughout life. He has learned to not let it bring him down.

7. If they could drive any kind of car they wanted, what would it be?
I can easily imagine Lisseria in a cute little Volkswagen bug, perhaps a green or yellow color.

I honestly cannot even begin to imagine what Nehthin would drive. Probably just a little truck or something inexpensive. I doubt he would really care what type of car he has, as long as it works. But for some reason I keep seeing him in a blue vehicle.

8. How do they deal with change?
Change is something they both have had to deal with. Neither mind it, it’s just a part of life.

9. If they had to amputate one body part, which one would they choose?
Goodness, what a question.

In hunting, Lisseria has to use her legs, arms, ears, eyes, hands, and all. It’s her livelihood and would be tragic for her if she could not, so losing anything would be difficult. She could probably deal with losing a finger if she absolutely had to.

Nehthin has most use out of his legs, he could still easily go on if he lost an arm. I’m sure he’d much prefer just losing a single finger or something though.

10. What would their favorite be at the local coffee shop?
For some reason, I imagine Lisseria would like anything with tons of whipped cream in it, and perhaps cinnamon. She’d probably drink pretty much anything there save for plain black coffee. If it’s sweet and good, she’ll like it.

While I think Lisseria would cover her drinks in all sorts of goodies, Nehthin would probably be more subdued, just taking a plain latte or something of the sort. He does not strike me as the kind to like coffee though.

Now then, for the extra 5 questions—

1. How did they meet?
Nehthin and Lisseria’s meeting was probably my most favorite character meeting to write. Nehthin had just recently come to Camelot and was out gathering firewood in a patch of woods outside the castle. When he leaned down to reach for something, an arrow whizzed right over his head and thankfully hit the tree instead of his skull. Next thing he knew, a girl was running towards him, extremely distraught, explaining she mistook him for a deer.

After explanations are done and introductions are made, the two find themselves laughing at the whole thing and kindle a quick friendship.

2. How do these two deal with conflict?
Nehthin is easygoing and Lisseria is good-natured, so conflict between them rarely happens. If they were to have any though, I think they would both talk it out as calmly as they could and try to come to a good compromise.

3. Do they have a special song, phrase, item, or place?
Later in the series, Lisseria will discover the hidden cave and dragons Nehthin and Arthur care for and they both will consider the cave somewhat of a special sanctuary.

Lisseria also later allows Nehthin to call her Lissy—a name she normally does not let people call her because it was her father’s special name for her.

4. What kind of things do they like to do together?
Raising dragons in secret! Fun stuff.

5. Describe their relationship as a whole in 3 words or less.
Sweet and genuine.

Posted by Christine Smith at 11:27 PM