Five Things I Learned From Lord of the Rings 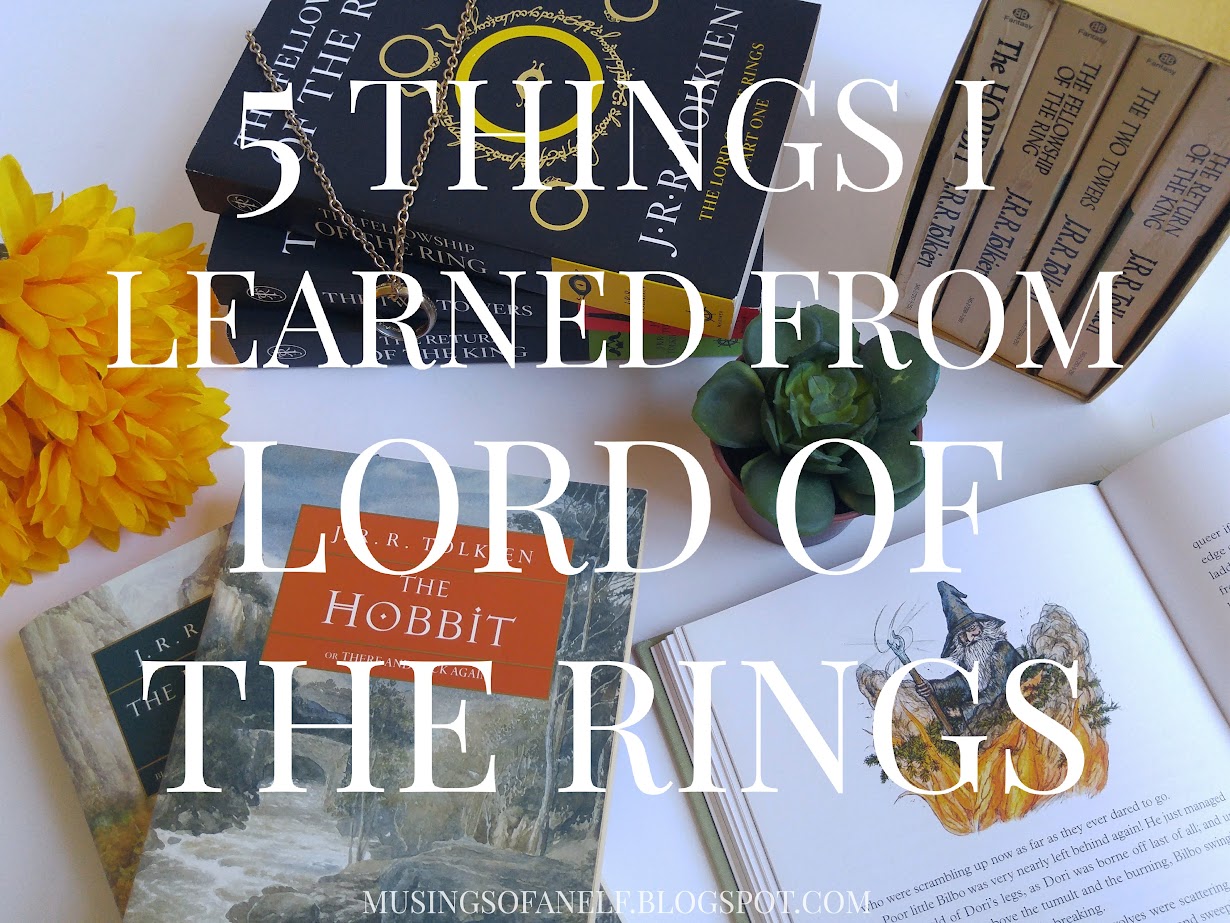 You may have noticed the influx of Tolkien appreciation sweeping the internets lately. That’s because September 22nd was Hobbit Day a.k.a Bilbo’s and Frodo’s birthday! And we Tolkienites always look for an excuse to celebrate our beloved author.

Obviously, I couldn’t let this Tolkien-ish time pass without doing some of my own fangirling. I mean, OF COURSE.

There is so, so much I can talk about when it comes to Lord of the Rings and Tolkien in general. Buuuut being the list-lover I am, I thought I’d list five specific things I learned from those beloved books (and movies of course). Because wow, have they made an impact on my life!

Five Things I Learned From
Lord of the Rings

There are No Limits to Your Story

I don’t think Tolkien ever, ever limited himself when it came to his story and world and characters. I mean, Middle-earth has more history than America! Think about it. Then there’s the emotional depth and complexity of every. single. one. of his characters. And that doesn’t even cover the vast plot! Tolkien had a story idea, and he ran and ran and ran with it. And as a result, we have the brilliant classic that is Lord of the Rings.

When I was a younger writer, I limited my stories. I took a concept and didn’t broaden it as far as I could. I got scared or overwhelmed and kept to things that were simple and comfortable. And that’s where I made a mistake. If I forever stayed in my comfort zone, my stories would never reach their full potential.

But whenever I think of Tolkien’s world, and the immense amount of work he put into it, it inspires me. It inspires me to reach farther and vaster and wider. To not stick to the first simplistic, cliché ideas that pop in my head, but to expand them into something big and complex. To really put my whole heart and soul into every story I write.

I still have to remind myself of this whenever I get overwhelmed or scared. But I also have to remember imagination is a glorious gift that we should all use to its greatest potential. Just like Tolkien did.

If there is any single message that I gleaned from LotR, it’s this.

Most fantasy these days has the “Chosen One”, but, ironically, the very standard of classic fantasy literature really had no such thing. Frodo wasn’t “chosen” to take the Ring to Mordor. He wasn’t forced to be the hero, or obtained magical abilities when he turned 16. No. In fact, Frodo was of the most simplistic, quiet, non-adventurous races in all of Middle-earth. He was a mere hobbit. The least likely person you’d ever think would save the world.

But what happened? Amidst mighty men and ancient elves and stout dwarves and even a powerful wizard, it was a hobbit who volunteered (not forced or prophesied) to take the Ring to Mordor and destroy it. He didn’t look at his size, his background, his lack of powers and fighting skills. He just saw a need and took a stand.

I so very often fall into that lie that I’m worthless and can’t make a difference. But God called all of us to take a stand for what is right. Unfortunately, I did not wake up on my 16th birthday to find a mysterious, wizened mentor at my front door claiming I have magical powers and am prophesied to save the world. But I was called to be a child of God. It’s only a matter of if I’ll be brave like Frodo and stand up for what’s right.

Because if Frodo and Sam, two little, ordinary hobbits, can walk all the way to Mordor, destroy the One Ring, and save literally the entire world, I firmly believe we all can find the strength and courage to fight for what’s right.

Never, Ever Give Up

Speaking of walking alllll the way to Mordor…

Let’s be real, if I had been Frodo or Sam I would have given up probably before we had even left the Shire. Much less gone on to endure eeeeverything that they went through. But they were tempted. I’m sure they were tempted every single day to give it all up. To return back to their comfortable lives in Hobbiton and put all this unpleasantness behind them. To let someone else do the hard work, or just let Sauron win, because defeating him seemed nigh impossible.

But they didn’t stop.

Again, it was their choice. They weren’t being forced to keep going or had some prophesy that said everything would be okay. But they chose to keep going anyway. Why? Because they knew you should always fight for good in the world, and never, ever, ever give up.

There is always darkness in the world. It spreads and spreads and spreads at a rapid pace, and if we stop fighting it for one moment, it will eventually consume everything. I know it feels hopeless sometimes. I know it seems so easy to just give up. But Lord of the Rings would have ended up being a verrrry different story if Frodo and Sam had chosen to let Sauron win. Now that would have been a depressing story, and not exactly the type of characters you’d want to root for.

But they didn’t give up, despite being sorely tempted to many a time. Instead they kept going and, in the end, light triumphed over the darkness, as it always does.

This life of following the Light, of following Jesus, is not an easy one. It’s a long, hard, tiring journey, with many bumps along the way. But we can never stop. Because, in the end, it’s always worth it.

And to continue the amazingness of Frodo and Sam…

We Want Heroes Who Inspire Us

In this day and age of morally gray heroes, I’m often hard pressed to find good, true protagonists who inspire me. More often than not, especially with TV shows and movies, the protagonists just teach me how not to act.

Now, I’m all for complex characters, and you guys know my love for antiheroes and the like. I absolutely am fine with some morally gray characters. I write them all the time myself! And I certainly don’t want a perfect character either. That’s not what I’m talking about. What I mean is, I want protagonists who inspire me. Because with this new obsession with morally gray people, it seems like the truly good ones are dying out. In fact, even the LotR films turned some of the good heroes into jerks. (*cough*Frodo and Faramir*cough*) Because apparently that’s appealing??? Er…no.

Lord of the Rings—at least the real, actual book—is filled to the brim with what I firmly believe “hero/heroine” truly means. We’ve already discussed Frodo and Sam. But what about Aragorn? He wasn’t perfect. He ran from his past and future for a long, long time. But, in the end, he rose to who he was meant to be. Merry and Pippin were also little hobbits like Frodo and Sam who went on to do great things. Eowyn joined the men in battle to fight for her land. Legolas and Gimli got past their prejudices against each other and stood together in the battlefield. Boromir was actually morally gray. He almost let the temptation of the Ring take him over. But he, too, chose to fight for what is right and died in honor.

These people have inspired me since I was 10 years old. They have stuck with me for years and years and years, and will forever be a part of me. And why is that? Because they were heroes. Because the inspire me to do better, to be better. They had their struggles and fallings, absolutely yes, just as any well-written character should. But they still followed the Light. They still taught me deep lessons that have forever changed me. They still inspire me day after day after day.

That is the type of heroes/heroines we need again. Because pretty much everyone loves the LotR cast, right? And I firmly believe that is because they inspire all of us.

Lord of the Rings has some amazingly deep, intricate themes. The type of stuff professors fall over themselves for. But you know what else LotR proves? That fantasy is EPIC!

I have always been a fantasy fan. I lived off the Disney animated classics and fairytales and the like when I was young (okay, I still totally do). But it was when I was introduced to Tolkien that I realized just how utterly, spectacularly, insanely cool fantasy really was. I had found my element, and to this day I have not looked back.

Yes, much of what we see in LotR is considered cliché now. But it wasn’t cliché when Tolkien wrote it. He made those clichés! He literally invented so many of the fantasy clichés we have today. Because he wasn’t scared to try something new, and make it totally epic. There’s tiny people who save the world and talking trees and lost kings and majestic elves and an evil overlord whose life source is in a magic ring and dragons and a ridiculously vast world. How is that not cool???

As I mentioned in my first point, I so often limited my stories when I was young. But the most awesome thing about fantasy is there are no limits. You can literally do anything. ANYTHING. Why would we limit ourselves or be afraid? Look what Tolkien did. If he had limited his stories, or even been afraid to get them published, where would we be? I shudder to think! His works have impacted generations.

Fantasy is an amazing, wonderful genre that mirrors so many truths of our world in a new, thoughtful way. Maybe I don’t have to take a powerful ring to a deadly land to save the world. But I do find myself wanting to give up in other hard things. And through Frodo and Sam, I’m reminded that I should never give up.

Fantasy stories have power. But more than that, they’re fun. The possibilities are truly limitless. If not for Tolkien, I may have not fully grasped that for a long time.

And there we have it. Just a sampling of what Tolkien’s works mean to me. If you can’t tell, I’m kiiiinda of fond of them. *grins*

What’s a book and/or author that impacted you? And if it’s Tolkien (because it probably is hehehe), what are some lessons you’ve learned from Lord of the Rings? I’d absolutely love to hear them!

Posted by Christine Smith at 8:41 AM

Email ThisBlogThis!Share to TwitterShare to FacebookShare to Pinterest
Labels: Fantasy, Lord of the Rings, Tolkien, Writing