{Mini Book Reviews} The Janus Elixir and The Hound of Duville 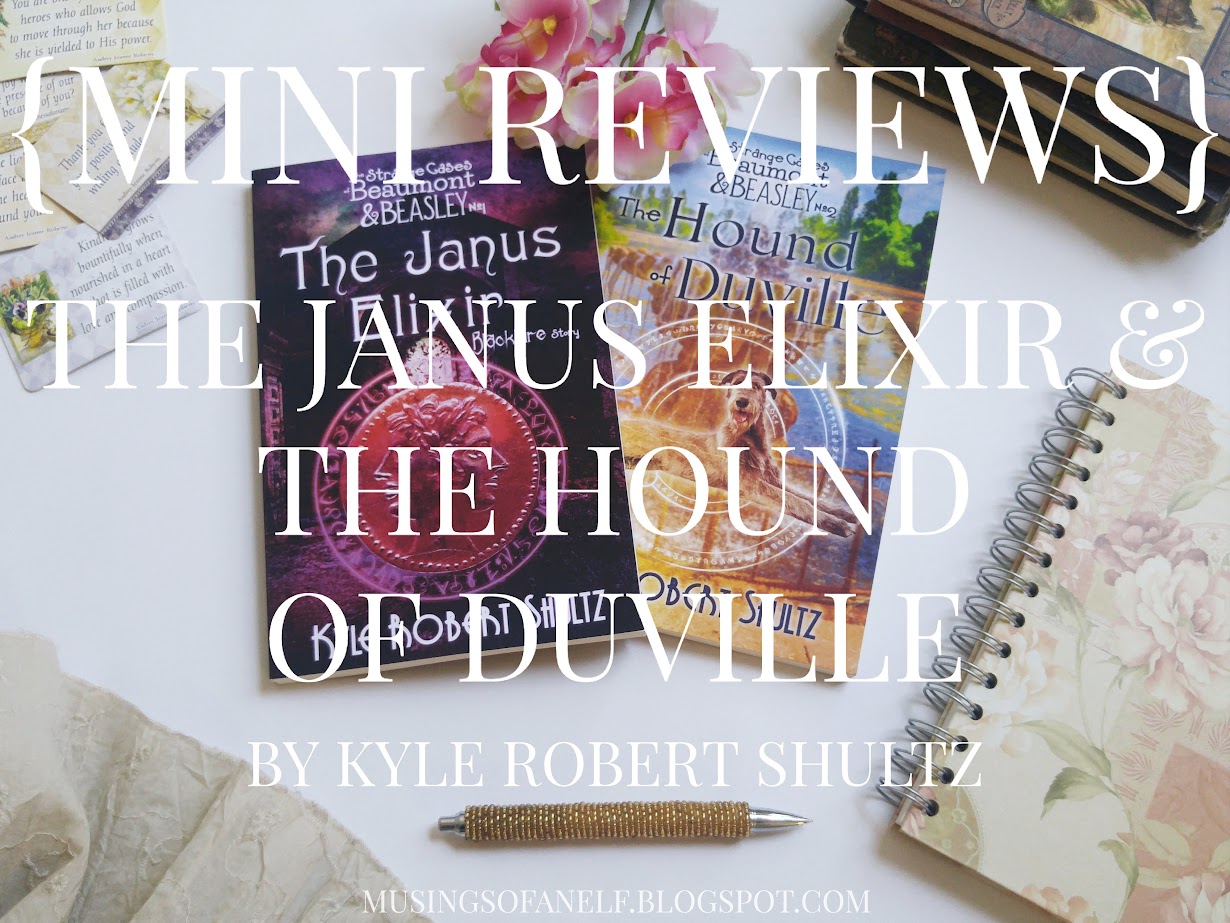 We’re doing something a little different and fun today. Instead of my usual book review layout, today I’m doing a couple of mini reviews! Since…well, the two books I’m reviewing are in fact novellas, and if I ramble about them too much we’d be veering into spoilers. So mini reviews it is!

But what am I reviewing today. Wellll, you guys know the 1920s-esque fairytale detective Beaumont and Beasley books I love and adore? The author, Kyle Robert Shultz, is currently creating a set of novellas that will basically be compiled into book #4 in the series and called The Strange Cases of Beaumont and Beasley, which means eventually they’ll all be put into one volume. But right now, the first two are released and available individually. Which is what I shall be fangirling talking about today! And do not be fooled by the size of these stories. Because wow wow wow! Did they pack a whole lotta awesome (and feels) into a few words. 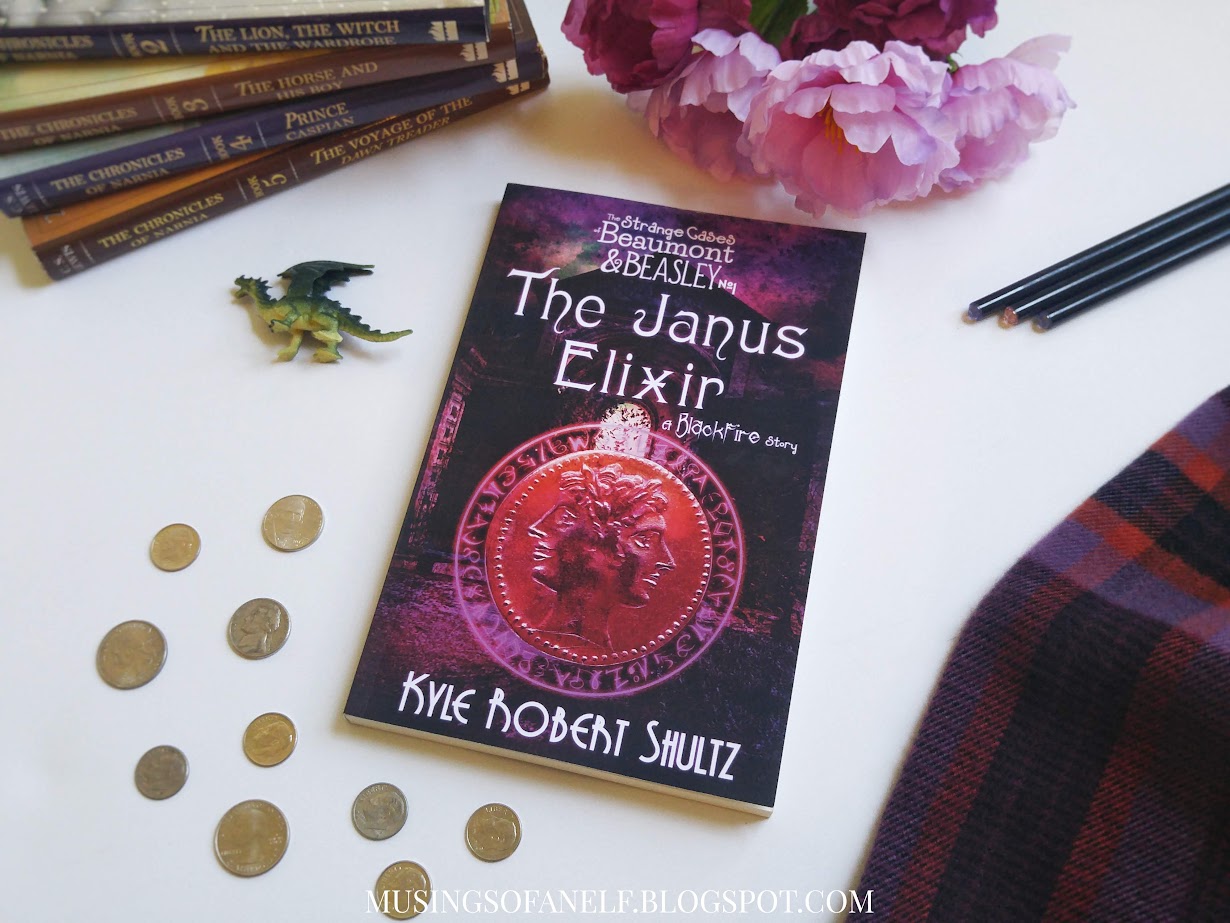 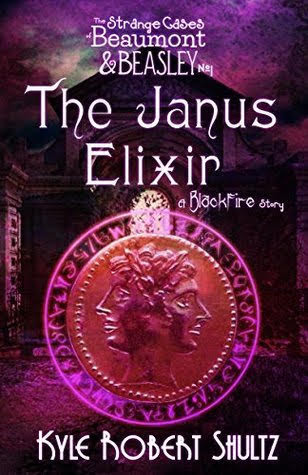 Archaeologists are not often consulted by gods. However, Malcolm Blackfire is not a typical archaeologist—he’s also a dragon. So, when the brain of the god Janus is stolen from Thanatos Abbey in the city of Talesend, Malcolm and his assistant Melody Nightingale are summoned by Hades himself to investigate. It doesn’t take long for a dark design to emerge behind the bizarre theft. The mysterious Dr. Henry Jekyll is performing dangerous experiments. A powerful sorcerer named Hyde has suddenly emerged in the Talesend underworld. The answer to the mystery is clear…or is it? Dr. Jekyll and Mr. Hyde are not what they seem. But by the time Malcolm discovers the truth about them, it may be far too late.

The first of six novellas comprising the fourth book in the acclaimed Beaumont and Beasley series.

As stated, The Janus Elixir is the first of this set of novellas, but it actually takes place before any of the other stories. Though I believe some events in it will later tie into other stories. BUT ANYWAYS.

This story is about MALCOLM. In all his grumpy, dragon-y glory. ‘Cause yeah, HE’S A DRAGON. And a SHAPESHIFTING DRAGON. He can be in human form or dragon form at will. You really can’t get any cooler (hotter? lololol dragon puns) than that. We’ve met Malcolm a few times in previous stories, but this time he’s the protagonist and just SDKJFLJKSD YES. I LOVE Malcolm. We also get to see more of his associate, the mysterious Melody Nightingale, which I was thrilled about!

Every book in this series is a retelling or continuation of some some sort of fairytale or myth. This one is Dr. Jekyll and Mr. Hyde, with some fun Greek mythology thrown in, and I seriously don’t see how you can ever go wrong with that.

- MALCOLM. Oh wait, I’ve already mentioned that. But I’m saying it again. Because MALCOLM. It was so fun being in his head with this one. Though he most often is in his human form, he does not let others forget he is, in fact, a dragon. He does so love to threaten people and remind everyone he is much older and wiser and more dangerous then any of us puny humans. What’s not to love about a dude who threatens to eat everyone who crosses him? Really now. Also, he’s an archaeologists. And a dragon. Best combination ever? I think so.

- Melody Nightingale! I’ve been so wanting more of her ever since we met her in The Stroke of Eleven. And I finally got my wish! I adored how she’d put Malcolm in his place, while also being concerned for his wellbeing despite the fact that he’s an ancient dragon. I think she brought out the more human side of him, which I loved. Except there are certain thiiiings about her and just I HAVE SO MANY QUESTIONS. Ahem.

- BANTER. This would not be a true Beaumont and Beasley story without it! This may be the most quotable of the stories yet. I just want to quote everything that comes out of Malcolm’s mouth. I was choking on laughter all the way through.

- Hilarious twists on some Greek mythology, soort of in the vein of Percy Jackson. But you’re going to have to read it to find out what kind of twists!

- A certain character who shall not be named but whom I realized was possibly supposed to be a Certain Someone and skdjflsjldjfljsdf. Wow. That was vague. XD You’re welcome. Let’s just say I had to set the book down to compose myself when it hit me WHO THIS PERSON IS. True story.

- Feels. Feels everywhere! I did not expect this many feels from this one novella. NOT AT ALL. But just…HOLD MY BLEEDING HEART BECAUSE WHAT IS HAPPENING???

- THE. ENDING. Um. Wut. WHAAAAAAT????? This kinda goes into the feels section. Just WHAT EVEN. I HAVE SO MANY QUESTIONS. AND FEELINGS. AND I DON’T KNOW WHAT TO DO WITH MYSELF. I just kind of sat there in shocked silence for several minutes once I got to the ending. IT WAS SO UNEXPECTED. Just…yeah. Get ready!

Basically you need to read it. Annnnd this one is FREE for all of Kyle’s newsletter subscribers! If you’ve been wanting to try his stories, but don’t want to dive into the full stories, this one is a great place to start. Because, though it may tie into some things later, it still stands on its own and has no spoilers for any of the previous books. So get ye over to Kyle's Website and subscribe to his newsletter! 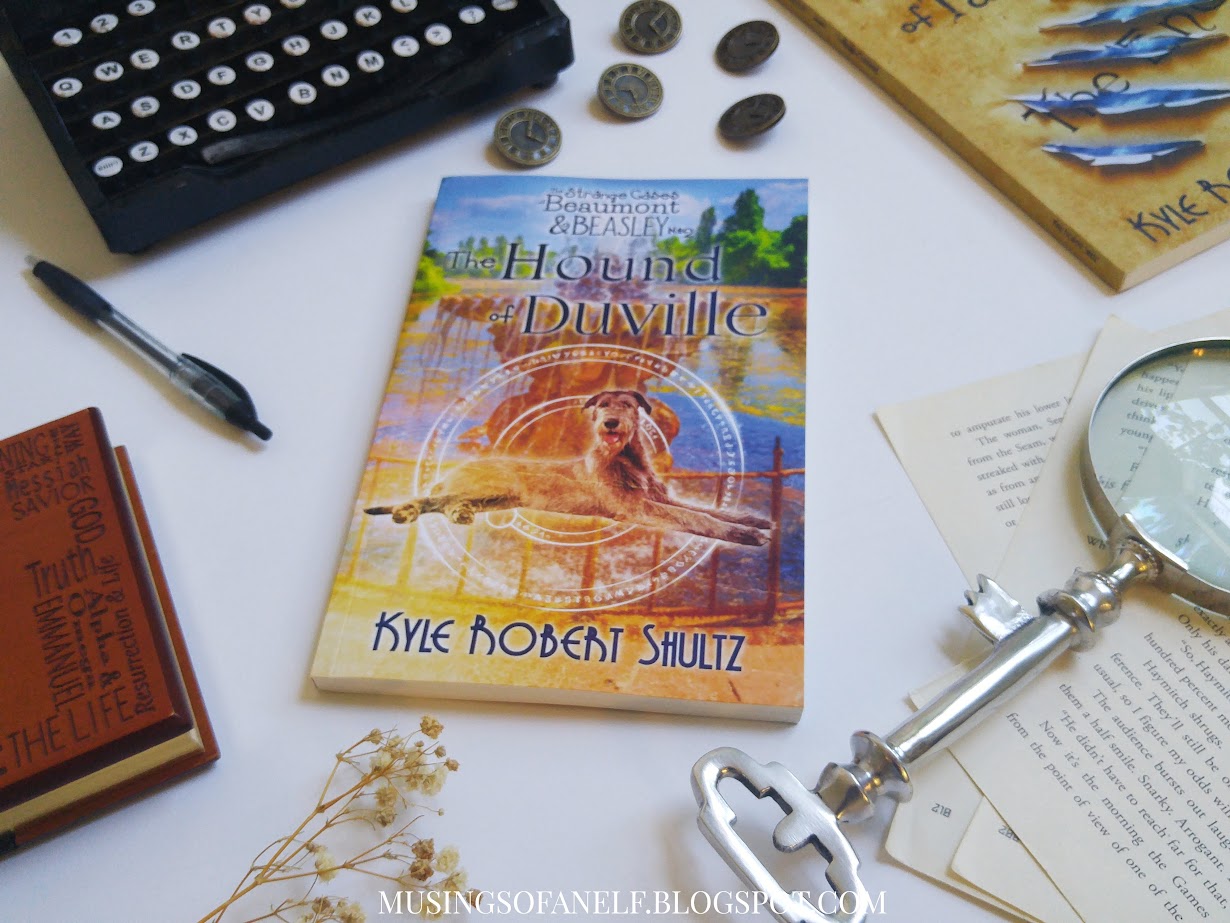 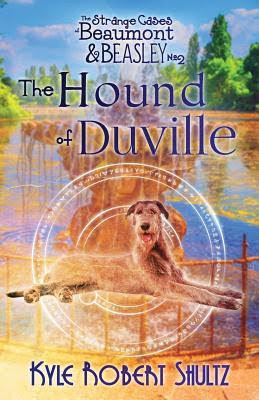 The return of the brothers Beasley! “I’m sorry, Miss Blenkinsop, but I’m afraid this dog is your fiancé.” Wealthy man-about-town Gregory Duville has fallen victim to a baffling (and embarrassing) curse, and Beaumont and Beasley are on the case. Except...they’re not. Because Lady Cordelia Beaumont has gone missing, leaving only detective-turned-monster Nick Beasley and his brother Crispin to tackle the mystery. To make matters worse, the curse afflicting Mr. Duville is targeting all other men in the city of Talesend as well. An ancient witch may hold the key to stopping the spell in its tracks, but is she everything she seems? Can Nick solve this case without the aid of Cordelia’s magic? Or will the secrets he’s keeping from Crispin doom Talesend forever?

The second of six novellas comprising the fourth book in the acclaimed Beaumont and Beasley series.

THIS. STORY. This one is now up there as one of my top favorite Beaumont and Beasley stories!

In The Hound of Duville we’ve returned to Nick and Crispin (after all the events in the last book, The Stroke of Eleven) and just YESSSS. I’ve missed these brothers so, so much. It’s been a while! But now they are back doing their detective thing and I LOVED IT.

This one harked back to the first book, with Nick and Crispin working together again, solving a mystery in Talesend. The whole thing made me feel so nostalgic and happy. The first book may be my favorite of any of them, and I loved how this one really brought us back to the early days before well…everything. Eheheh. *distant sobbing* It was an utter delight from page one to the end!

- Nick and Crispin working together and being all brotherly and banter-y and my adorable, precious Beasley boys whom I’ve missed so very much. <3 Nick is basically like the tired, no nonsense old cat and Crispin the overactive puppy and their relationship gives me life.

- An utterly hilarious curse spreading all across Talesend (basically the London of this universe), that, yes, involves dogs. Naturally.

- A lighthearted tone (with a touch of feels). Though I adore books that rip my heart out because I’m one of those psychotic fangirls, it’s also nice to just have some purely comedic reads. This one is mostly that! It’s pretty much fully a fun romp of an adventure from start to finish. Which I think is perfect after all we suffered through in A Stroke of Eleven. I’m totally loving the sliiightly darker, more serious, high-stakes plot this series has been taking. BUT, at the same time, it was good to have a bit of a breather before all of that continues.  But no fears, this one still had some feelsy things in it because…well, yeah. For those of you who’ve read The Stroke of Eleven you should know. Eheheheh…heh… *sobs*

- REFERENCES. Oooh, the references. There were a couple of fun references from well-known and loved movies in this one. In fact, one entire section was a total blatant reference to one of my favorite movies and oh. my. word. I was cracking up SO HARD. It was good I read this one in my room alone, because if I had been reading it in public I would have gotten looks as I sat there grinning and cackling madly to myself. And just having to stop reading altogether a couple of times to compose myself. IT WAS A RIOT. I loved every second of it!

- A sentient house/office/thing. And yes, it is as cool as that sounds.

- A fun retelling aspect. As I’ve said, every book retells some kind of story or another. And…I’m not sure if I should have known from the start which one this one was retelling or not??? It may have been my own blondeness not grasping it at first, but when I did realize OH MY GRACIOUS. I was delighted. It was perfect. Let’s just say these books do not retell stories in orthodox ways. I love it. XD

- Another feelsy ending. I totally lied when I said this was an utter delight from page on to the end. THE ENDING WAS NEITHER LIGHTHEARTED NOR FUNNY. Because I guess the ending of The Janus Elixir wasn’t gut-wrenching enough. We have to have two heartrending endings. THANKS, KYLE. I need the rest of these novellas nooooow!!!

Other than the ending (which isn’t reeeally a con, because there did need to be some consequential continuation (wow, say that 5 times fast) things going and I appreciated that aspect), this was truly a riot of a read. I read it just a few days ago and already want to reread it! But do take note that this one is very heavily tied into the previous books, which means you’re absolutely gonna want to read the first 3 Beaumont and Beasley stories before this one. Ya know, unless you want to be really confused and have spoilers everywhere. Juuust sayin’.

Overall, these stories were an utterly spectacular start to the six that will comprise Beaumont and Beasley #4. Now excuse me while I twiddle my thumbs and wait for the next story because questions and feeeeels!

Well, neither of those reviews were as mini as I meant them to be. Ooops. This is me. We should have known. Have you read either of these stories? Because I really need to flail with people! And do you enjoy more humorous, lighthearted reads or do you want all the feels? (I’ll take both, pleaseandthankyou.) Also, don’t forget you can get The Janus Elixir for free by subscribing to Kyle’s newsletter. *nudge, nudge*

NOTE: I was provided a free copy of both these stories by the author in exchange for an honest review.
Posted by Christine Smith at 10:22 AM