Five Ways To Expand Your Story 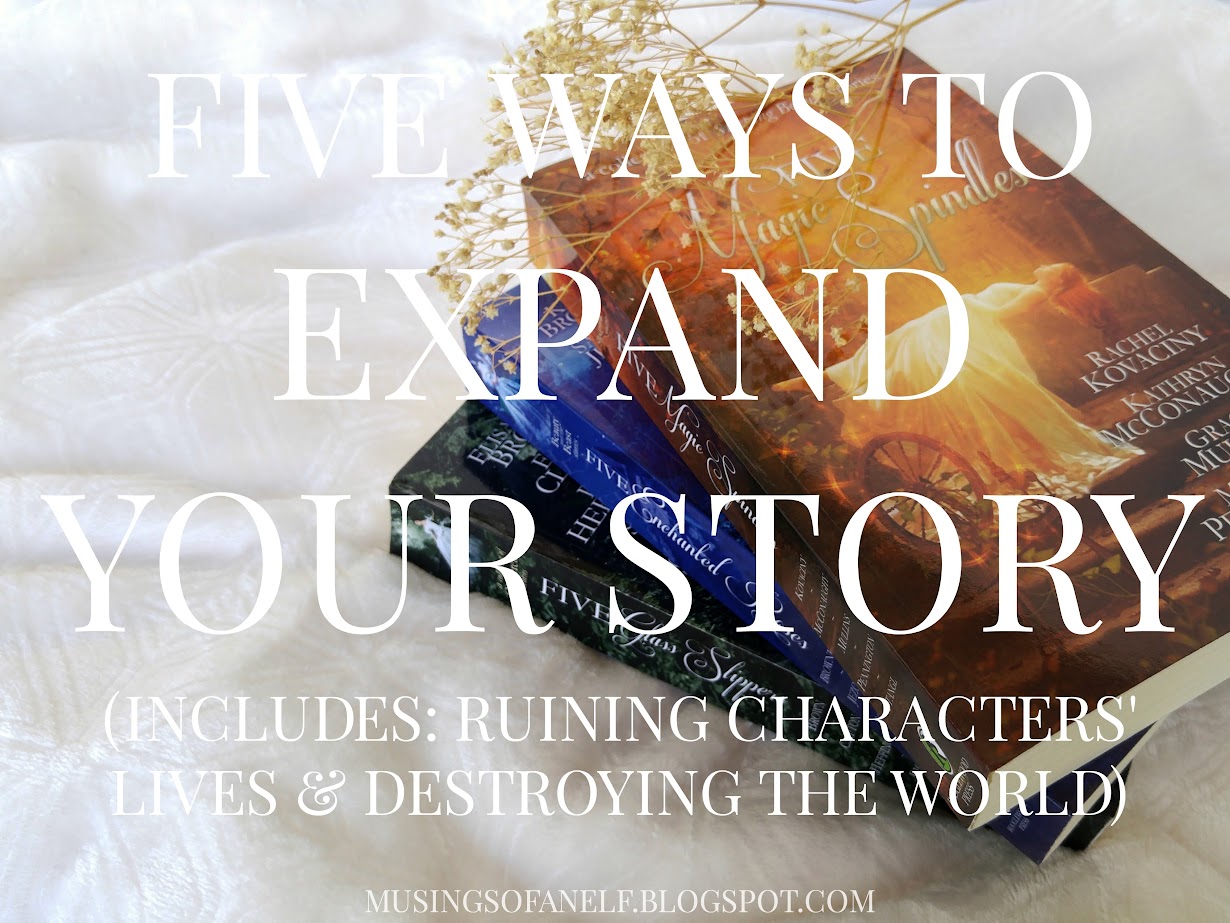 Some of you may know that my current WIP, Burning Thorns, was originally a 20k novella that I later turned into a full novel. That was my first time ever doing anything like that. I’ve always written novels, but I’ve never turned a novella/short story into a novel. It was a new experience. But it went well. Surprisingly well. That little 20k novella is now a 95k novel and I’m currently editing the 3rd draft.

I probably should have done a post like this during the expansion days (that was like 2 years ago or something crazy). One would think I’d do a post on editing or something since that’s what’s been consuming like 87% of my time these days. Buuut logic has never been my style.

So today you’re getting a post on tips of how to expand your story!

I think this process came easy for me because I’m infamous for writing gargantuan books. (Like seriously, I need to read posts on shortening novels. #HALP) Not only that, but I already felt like Burning Thorns was a bigger story. There was so much I wanted to explore that I couldn’t in its novella state. It was for a contest and the word limit was 20k, so I didn’t have the freedom to chase those side-plots that kept enticing me. But basically the day the contest was over and I wasn’t on the winner’s list, I realized HEY. I CAN DO WHAT I WANT WITH THIS STORY. Thus I did. And I’m so glad.

ANYWAYS. (I’m so longwinded, guys. Proof I’m qualified to write this post. *grins*) I had an utter blast figuring out ways to expand my little novella into a much grander story, and I learned a lot along the way. So if any of you have stories you’d like to expand into something bigger, or just tend to write shorter novels and need some help upping those wordcounts (I wish I had that problem), this post is for you!

5 WAY TO EXPAND
YOUR STORY

The second I made the decision to expand BT, I knew I should add at least one character. The cast was already small as it was, and I knew if I wanted to make it a full novel, there needed to be more players on the board. (Plus I’m just obsessed with characters, so…)

The world is set in a land where different fae creatures roam wild, but I didn’t get to really explore these fae people much in the novella. Now I could! I decided I needed at least one fae person to really bring alive my fae world. And thus Lark was born. And…well…these days I forget he wasn’t even a part of the novella because he’s kind of the driving force of THE WHOLE THING. (*shoots him accusatory glare*) It was easy expanding the story once he came into existence, because he plays such an important role and is very…active, shall we say.

I think adding characters is the best way to really up that wordcount. After all, each character has their own motives, goals, maybe a side-plot or two, personalities, backstories to explore, the list goes on and on. But, of course, don’t add character just for funsies. They have to have purpose. But hey, that is the fun part!

Like I said, Lark became a huge driving force and interwove himself so deeply into the plot and other characters’ lives. My simplistic plot suddenly became much more complex and fun once he arrived. That was the goal! It’s my favorite thing to connect the characters in some way. Give them backstories that interweave, make one of the characters move the plot forward in a good or bad way, add some entertaining character dynamics. All delightful things to brainstorm, right? I promise, once you thread someone new into your story, you’ll suddenly have a horde of expansion ideas!

GIVE YOUR SIDE CHARACTERS BIGGER GOALS

In the Burning Thorns novella, I had basically 2 main characters, a side character, and an antagonist you see like…once or twice. That was about it. By the end of the story you meet a few other people, but the wordcount was too limited to explore any of these side characters. I had one character who literally only had one line for the entire novella. But in the novel? That character has multiple points-of-view, entire chapters centered around them, and a side-plot.

I was ecstatic to have the freedom to explore the lives and full motives of all my side characters and antagonists. Again, each character needs to play an important role and continuously drive the plot forward, but the protagonist is not (and should not) be the only one doing this. If you’re looking to expand, explore each of your characters, figure out what their motives are, give them purpose and intriguing backstories. Make their goals even bigger and harder to achieve.

It’ll boost that wordcount like crazy, bring lots of interest to your story (come on, we all love learning about those side characters, don’t deny it!), and is just a lot of fun! (Character exploration is my favorite thing ever, if you can’t tell.)

I loved doing this for BT. I’m…erm…not one to write very fluffy, simple fiction. So of course the novella wasn’t all fluff, but it wasn’t exactly dark and complex either. The story really only centered around my two protagonists and their problems.

Well, for the novel I expanded their problems to affect…the whole world, human and fae world alike. Because why ruin only two peoples’ lives when you can ruin the lives of ALLLLL the people??? #EvilAuthor

But really now, if your story is feeling like it needs a bit more complexity, raising the stakes works wonders. For example, with BT I made the fae world a much more dangerous and dark place than the sunshiny world it was in the novella. I also made the “beast’s curse” (this is a Beauty and the Beast retelling, which I think you all know because I TALK ABOUT IT WAY TOO MUCH) doesn’t just affect him. The entire fae world is cursed, which also puts the human world in danger.

Make the villain’s goals reach farther out, add worse dangers to your characters, throw in an extra antagonist or two. Maybe you’re writing an urban fantasy in a struggling city. Well, what if it’s not just that city that’s in ruins? What if there has been an apocalypse and the whole world is in partial ruins and struggling? Or perhaps you have an epic fantasy where the antagonist is looking to take away the protagonist's kingdom? Maybe the baddie is in league with other kingdoms as well and now the protagonist has to deal with three invasions instead of one. The possibilities are really endless here!

Higher stakes means more trouble for the characters which means lots more work for them which means bigger book!

Plus making more trouble for your character is always a good time.

Everyone loves a story that really brings the setting to life and awakens our sense of wonder. Are there things to your world you can add? More culture and history? Cool creatures? A whole other race of people?

I’m a fantasy writer, so of course I’m dealing with made-up worlds that can always be expanded on. But even if you’re a contemporary or historical fiction writer, there’s still so much to explore. You can really dig into the history of your setting, add fun places for your characters to meet like a local pizza place (adding pizza in your story ups the quality 5000% #FACT), bring out the culture and way of living in that certain place. Really getting deep into the setting can add some words and make your story fully come to life.

(Except I’m not the best at original worldbuilding. Eheheh. But I did add a lot more to BT’s world, especially the fae world, which was so fun!)

Just don’t go completely overboard. We don’t want to accidentally turn our stories into history textbooks… Just like with the characters, each aspect of the world needs a purpose.

Whoops, I’m back to characters! (Notactuallysorry.)

This was another trick that really helped stretch BT from a little novella to a far wider, sweeping novel. I gave literally every. single. character. a much deeper arc. (I may be a bit obsessed with character arcs???)

The fun thing about this is it can tie in with raising the stakes. Got a utterly selfish jerk of a character who loses a loved one and, in turn, learns to value the people he does have in his life? What if throughout the story he loses multiple loved ones to really whip him into shape? (Ehehehe. I’m so nice to characters.)

Hey, you can even double arcs. First have them good, then turn toward bad, then work their way up to good again. (I kinda love doing this. Again #CharacterArcObsessed) For example, maybe you have a gal who is fairly trusting and open, but for the course of the story, she is constantly being betrayed by people she thought she could trust and becomes closed off. Then she meets someone who is constantly there for her and slowly pulls her back out of her shell and helps her learn to trust again. Ta-dah! A double arc.

Character arcs (to me anyway) can totally make a story, and making them big and impactful is even better. So don’t shy away from really upping those arcs if you’re needing more story!

I hope this was sorta helpful? Maybe? (Probably not.) Basically all my advice includes ruining your characters’ lives even more annnd maybe some of the world ending on the side. FUN STUFF.

Oookay, really, the best advice I can give you for expanding your stories is HAVE FUN! Or, in Loki’s terms, DO WHAT YOU WANT. I added a character because I love characters and wanted another one, and I raised the stakes because the more complex and convoluted my plots are, the happier I am. But maybe you have no use for another character and are satisfied with the overall plot and just want to expand on character arcs. That’s great!

Write the type of book you love and add things that you enjoy. Don’t force yourself to throw in a ton of stuff you hate just for the sake of a bigger wordcount. The key to good storytelling is writing a story we’re in love with. After all, if you love your story, then your readers are sure to as well.

All right, guys! I need to know. Do you write short or long novels? (Surely I’m not the only monster-novel writer out there…) Have you ever expanded any of your stories? What methods did you use? I’d love to hear about it!

P.S. If any of you ever have any writing questions, please, please, please don’t hesitate to ask! I certainly don’t have the answers to everything. (Hahahahahaha! Not even close.) But I love talking writing and am always looking for blog post ideas and to provide content you’re interested in. So if you’ve got writing questions (or any types of bookish posts you’d like to see from me), shoot me a comment, email, Twitter or Instagram DM, GoodReads message, anything! (Seriously, there are so many ways to contact me. XD) I’d be thrilled!

Posted by Christine Smith at 11:13 AM