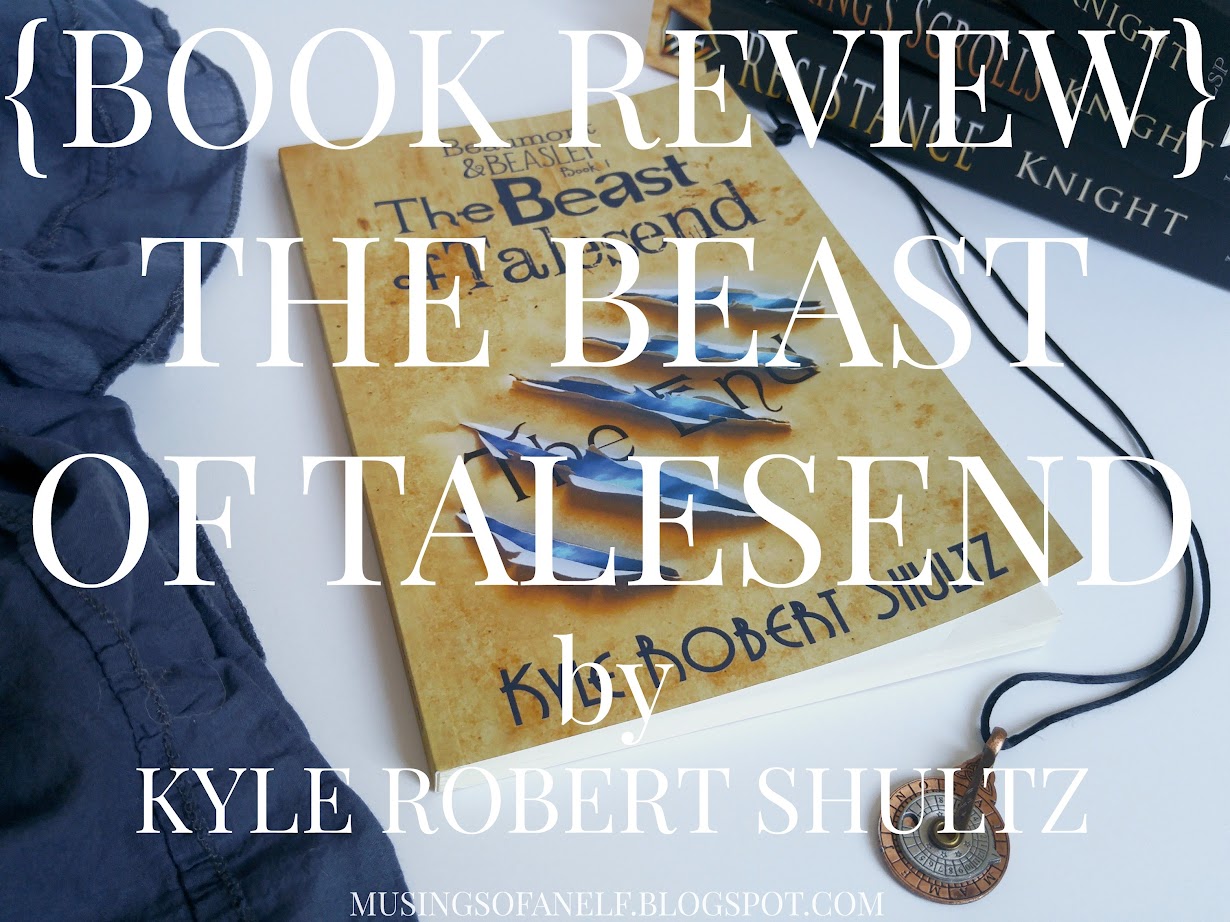 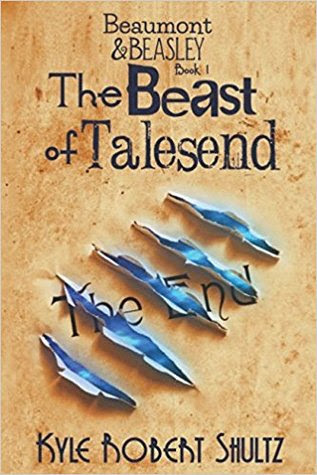 Private eye Nick Beasley lives in a world where fairy tales ended a long time ago – where zeppelins now soar the skies instead of dragons, and where the first automobiles have taken the place of flying carpets. He’s made a name for himself across the Afterlands by debunking fake magicians and exposing fraudulent monsters. This is the modern age, after all. Magic and monsters are long gone.

At least, that’s what Nick believes. Until he gets magically transformed into a monster, that is.

The only person who may be able to help Nick is Lady Cordelia Beaumont, one of the last enchantresses in the Afterlands. But in order for her to cure him, they’ll have to retrieve a powerful artifact from a ruthless crime lord – who is also Cordelia’s father.

The fate of the Afterlands lies in the hands of a runaway enchantress and a monstrous ex-detective. What could possibly go wrong?

Perfect for fans of Doctor Who, Once Upon A Time, Indiana Jones, or The Dresden Files, the Beaumont and Beasley series features high adventure in a world where fairy tales are history. 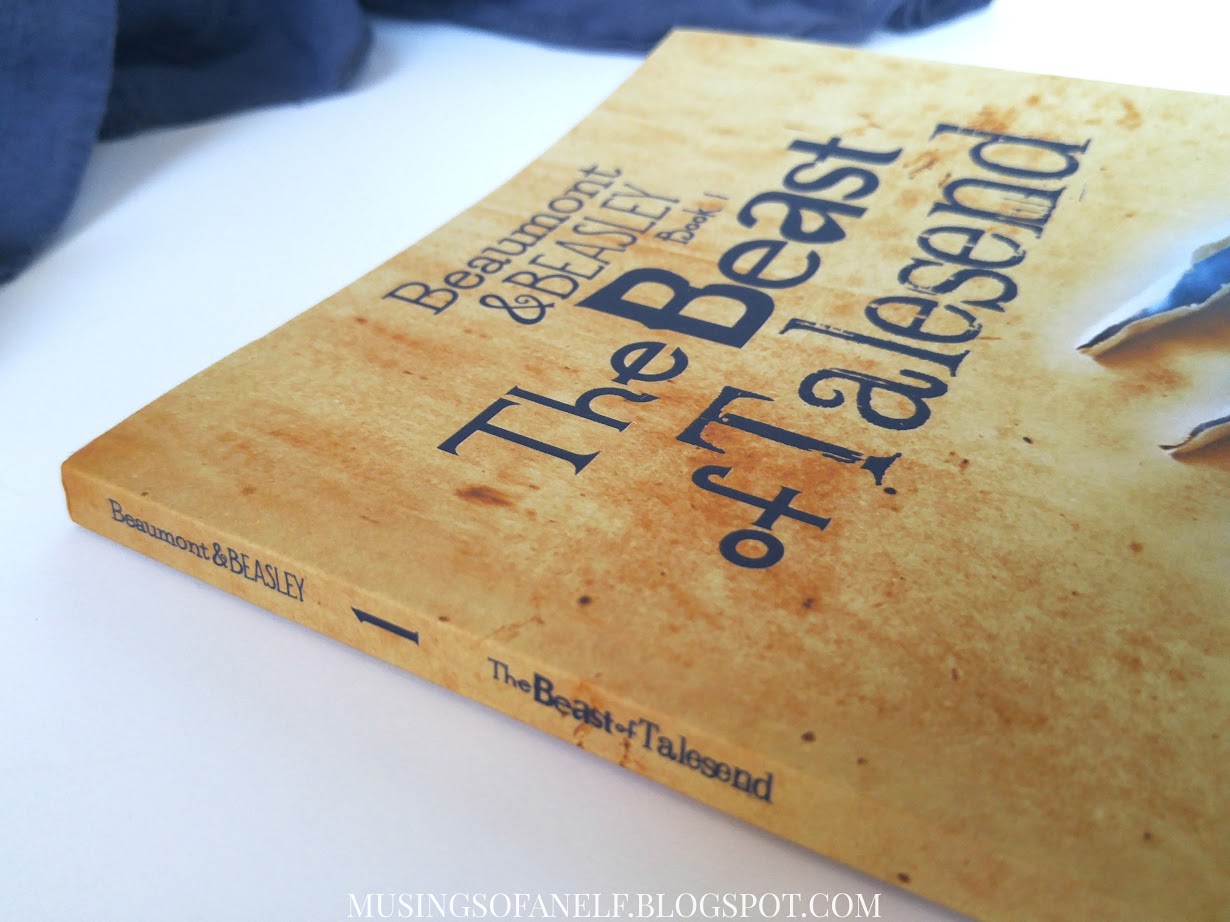 The Beast of Talesend is book #1 in the Beaumont and Beasley series and is, essentially, a Beauty and the Beast retelling…sorta.

Imagine a 1920s detective-story and then set it in a world where fairytales aren’t just stories…they’re the world’s history. Add a heaping cup of humor, loveable (and hilarious) characters, magic, and a downright fun ride of a plot, and you’ve got yourself this book.

I told you everyone needs to read it.

It’s written in first person, which isn’t always my favorite but I honestly couldn’t imagine this story any other way. Being inside our main character’s—Nick Beasley’s—head and having his dry witted narration made the story.

Oh my gracious goodness, THE CHARACTERS. I just want them all to be my best friends.

Nick: As I said, Nick is our main character and narrator and AGH. I just couldn’t handle his dry wit. He’s a skeptic about the whole “fairytales and magic are real thing”. The world has moved on from that, and he’s made it his career to prove there is no such thing as magic via his detective agency. So when he gets turned into a beast (not spoilers, it’s right there in the blurb), well…he’s a little taken aback, to say the least. My favorite thing about him is how he just takes everything in stride in a pessimistic, longsuffering way. His whole mentality is basically, “Oh…I’ve been turned into a beast and everything I believe is completely wrong. Well, that’s just great.” He’s so calm and logical and pessimistic about things. I absolutely loved being inside his head and seeing his reactions to all the insanity that happened to him. Poor Nick…

Cordelia: Lady Beaumont…excuse me, Lady Cordelia is one of my FAVORITE types of characters. The first time we see her she’s throwing a roll at someone because she can’t stand their silly hat. And…that basically describes Cordelia through and through. She’s one of those whimsically chaotic beans where you just never know what they’re going to do next. And she is the perfect balance of being totally fiery and sassy but still has a good heart. I completely and totally adored this girl. Oh, and she’s also magic. So yes. She’s epic. And then you toss this wild girl with the logical Nick and ooooh the fun dynamics. Literally one of my top favorite character dynamics in fiction EVER. I LOVED THEMMM.

Crispin: CRISPIN. CRISPINNNNN. Probably my favorite character. Because CRISPIN. He’s Nick’s younger brother (though everyone in this book is in their 20s, just FYI), and he’s a riot. Where Nick is the more stern, logical type, Crispin is fun, happy-go-lucky, optimistic, and rather flighty. Sadly, his part isn’t too big in this book. (Thankfully, he plays a much bigger role in the sequel, The Tomb of the Sea Witch.) But he’s still there enough to make you fall in love with him. He’s just adorable!

All of these characters were so fun and unique. I say Crispin is my favorite but…I think I love them all equally. And they’re amazing just themselves, but then you throw them all together with their utterly different personalities, and you have one of the most fun casts I’ve ever read about. I want to be part of the Lady Beaumont and Brothers Beasley team! 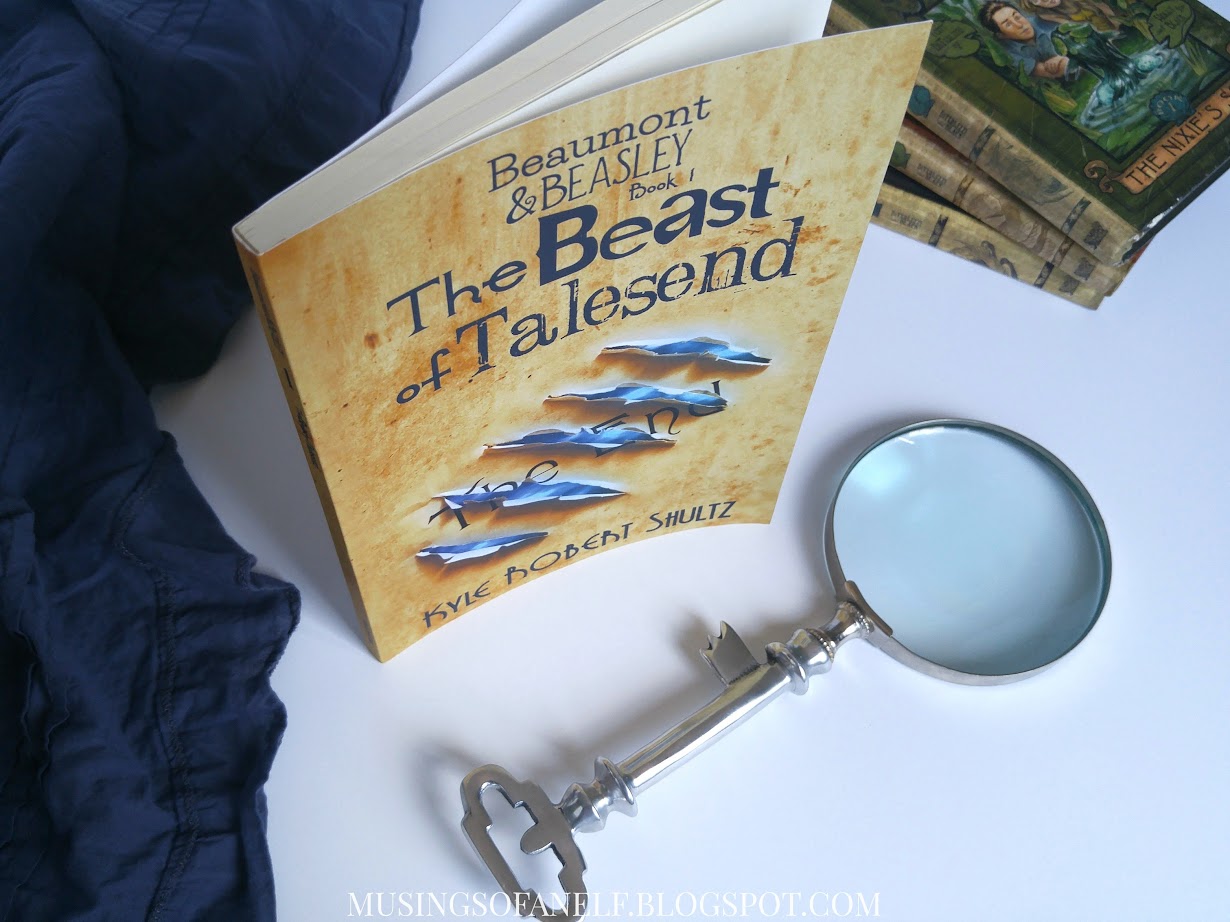 -THE WORLD, GUYS. It’s set in an alternative version of London in a 1920s detective-style setting. Which I’ve always loved, but then turn that it into a world with fairytales and HELLO ONE OF MY NEW FAVORITE BOOKS OF ALL TIME. It was just a blast how so much of the world’s history was based off of fairytales. Buuut the fairytales may not have played out as everyone thinks. *wriggles eyebrows* The magic system was also very fun and cleverly done. I just utterly adored the very 1920’s-esque setting with crime bosses and detectives and all that classic stuff MIXED with magic and fairytales. It worked so well!

-HUMOR. HUMOR EVERYWHERE. This was honest to goodness one of the funniest books I’ve ever read in my life. I was constantly bursting out loud with laughter. The narration is hilarious, the characters are hilarious, the plot itself had some completely hilarious parts. Just…THE HUMOR. Basically every other sentence was quotable in this book.

-The plot itself. It’s not all just laughs. Oh no. There’s some seriously epic and complex stuff going on. Some Beauty and the Beast stuff, some magical artifacts, some gangsters, some end of the world threats. Fun times, fun times. I especially liked a bit involving a magic mirror because I have this weird obsession with magical mirrors in fiction (I don’t even know why, there are just so many fun things you can do with it). And that was a huge part of the plot which made me super happy. IT WAS SO EPIC. The whole thing was action-packed and a wild and amazing ride from page one to the end.

-The whole mix of the fairytales being set in one world. There were sooo many references to different fairytales and things. The way they were woven into the world was brilliance. I’m allllll about fairytale crossovers, please and thank you.

-THE EPILOGUE. Which gave promises of one of my other top favorite stories playing a role in later books. BUT THAT’S ALL I’M SAYIN’ *zips lips* But like I said, soooo many epic crossovers.

HA. Do you think I actually have any complaints? Noooo! Seriously, this book was borderline perfect. Which is something for me to say because I am a picky reader and usually always have something to whine about. But this story was like all of my favorite things wrapped into one.

Oookay, I do actually have one mild complaint. It was super short. 126 pages total—practically novella size. And I much prefer more lengthy books. But, honestly, this somehow managed to be in depth and give us enough time with the characters to completely fall in love with them. So the short length worked. Buuut I could spend eternity with these characters so even if it was an 800-page monster I’d still probably be complaining it was too short. XD

Fortunately, it’s just book #1 of a whole series so we definitely get more of the Beasleys and Lady Beaumont and their crazy adventures. THANK GOODNESS. 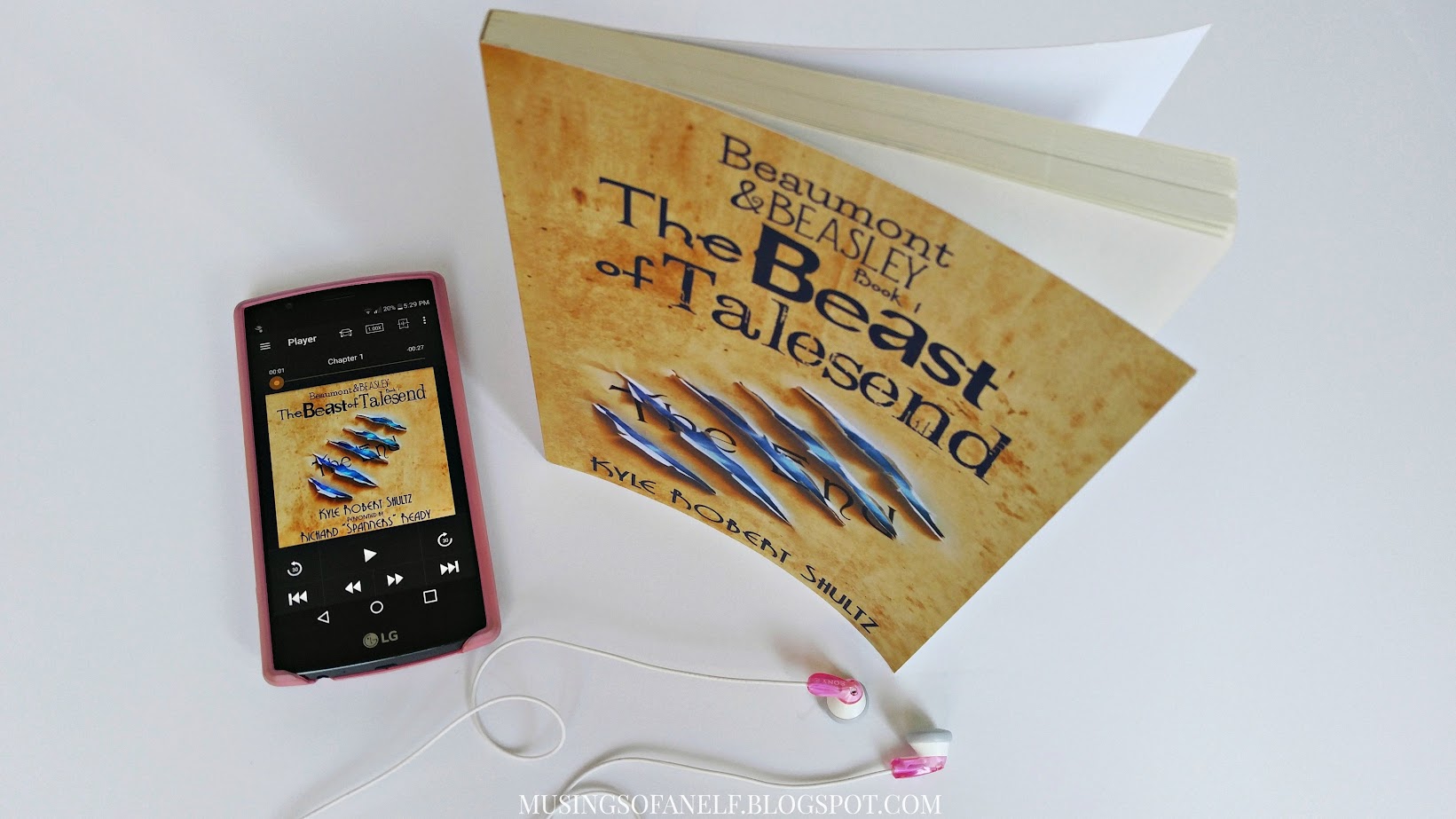 Like I said, I not only read the book, but I also listened to the audiobook…just a few months after reading the book. Which I ain’t complainin’ about one little bit! I was honestly considering a reread of the book already because it’s just THAT GOOD. So getting the audiobook was perfect, because it was a way to immerse myself in the story again but in fresh way.

I’ll be honest, I never really listen to audiobooks. I’d much prefer to just read the story. Mainly because I’m not auditory at all, in that I can’t retain anything I hear and I have the worst time paying attention to things I’m supposed to be listening to. But since I already knew this story, making the reread an audiobook worked great.

And ooooh my goodness. THIS AUDIOBOOK.

Firstly, it’s narrated by a British guy. Which that alone will make you want to listen to it. But he also does all the characters’ voices, and it’s so fun! The voice fit the story perfectly. A lighthearted fairytale like this just calls for a British voice doing all the voices. It really brought the story to life in a whole new way.

What I really loved about it was how calming it was. It felt like a parent reading to their child before bed. Fun but calming at the same time. I always felt so relaxed during my listens. I discovered it was the perfect stress reliever.

Then there was the way the epilogue was done. It gave me chills, in the best way possible. Buuut you’ll just have to get the audiobook to know what I’m talking about. *cackles*

But seriously, if you’re into audiobooks or just like to be read to and need something to relieve stress, I highly recommend this audiobook. It was so good!

Not a thing. This book was perfectly clean and family-friendly. There was a good bit of action and a smidge of violence, but nothing too graphic. Just typical fantasy violence. I’m perfectly comfortable recommending this to any and all ages. And I AM. I firmly believe young ones, teens, and adults alike would adore this story. It’s one of those stories I can’t really categorize into any age genre. It’s lighthearted, so good for young ones. But the characters are in their twenties, so perfect for the slightly older crowd. I don’t know. JUST READ IT.

If you’re into fairytales, 1920s settings, humor, amazing characters, or just want a quick and lighthearted read, THIS ONE’S FOR YOU. It’s clean, it’s hilarious, it’s got deep characters and a fun plot. There’s just nothing not to love!

Buuuut really, I could have skipped all this talk and just summed up this whole review in one sentence: EVERYONE SHOULD READ THIS BOOK.

SPEAK WITH ME. Doesn’t this book sound amazing? (Yes.) Are you going to read this book? (Yes.) Have you already read this book? (Hopefully.) If so, FLAIL WITH ME. And, because I’m curious, how do you feel about crossovers? (I love them, if that wasn’t clear.)

(Note: I received a free digital copy of the audiobook from the author in exchange for an honest review.)

Posted by Christine Smith at 10:01 AM