What Beauty and the Beast Means to Me 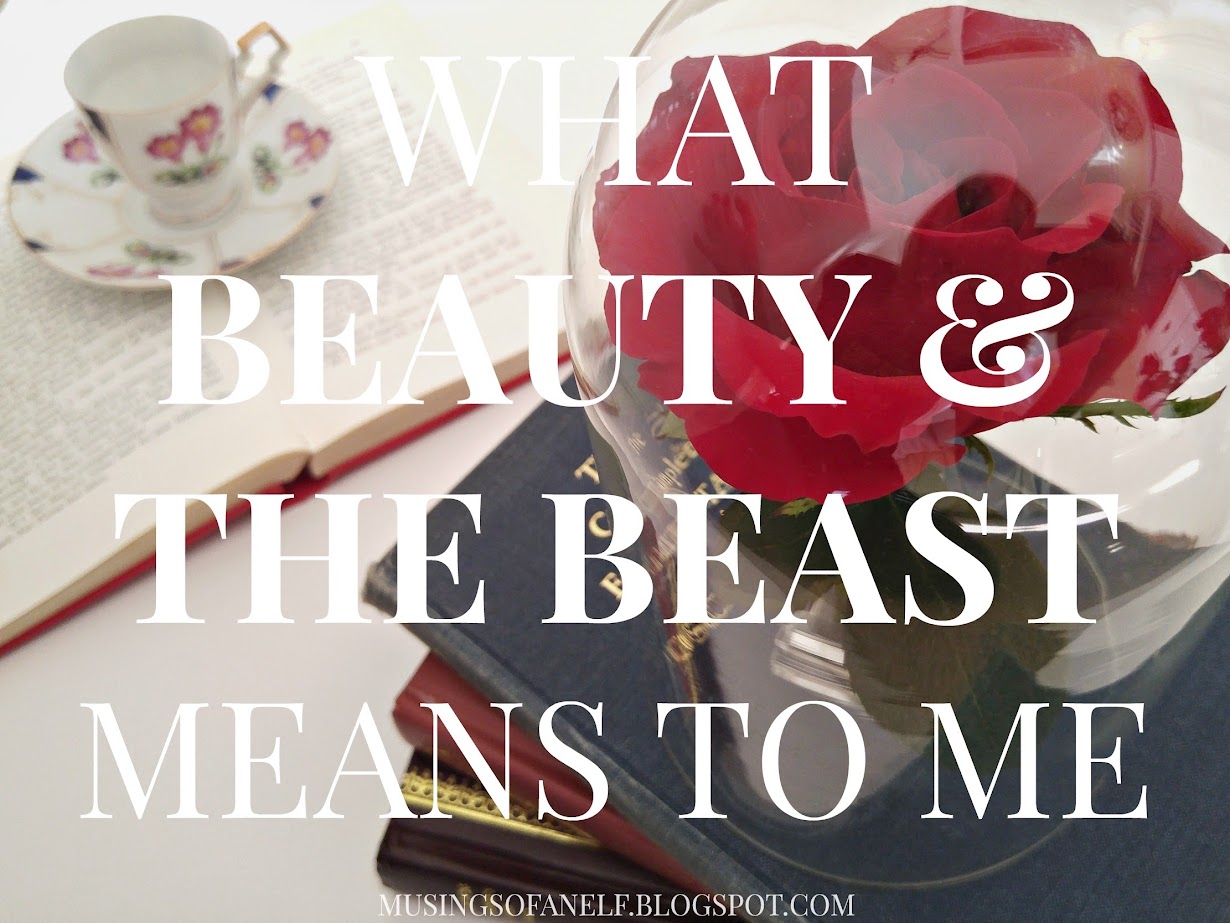 DISCLAIMER: I’m just going to start out and say this post has nothing to do with the new live action Beauty and the Beast movie. So if you’re groaning thinking, “Another post about that movie?” No fear! This is about the ORIGINAL FAIRYTALE. I’ve actually been meaning to write this post for, honestly, a couple of years now. And I thought since Beauty and the Beast is on everyone’s mind, this would be a great time to finally get around to it. Secondly, I want to make it clear that this is an OPINION post, not a FACTS post. As in, this will be about my personal opinions on the original B&B fairytale, not in any way straight up facts about it. So do feel free to disagree!

Alrighty, now that that’s out of the way, onward to the actual post!

As I think all of you know at this point, I’m currently (or supposed to be) going through my second round of edits on my Beauty and the Beast retelling, Burning Thorns, in hopes to pursue publishing with it. Because of that, I thought it might be good to explain why I’m putting my heart and soul into a Beauty and the Beast story.

Long story short: It’s hands down my favorite fairytale. “But WHY?” you may be asking. OR some of you may be saying, “Why not? It’s a good story!”

The magical thing about fairytales is that they can be interpreted in dozens of different ways, and mean a hundred different things to each of us. And I love that! These short stories pretty much always have a life lesson (or 20) woven into them. Albert Einstein himself was a great advocate for fairytales and had this to say about them:

“If you want your children to be intelligent, read them fairy tales.”

Sure, they’re often weird and dark and creepy, but isn’t life weird and often dark as well? Fairytales (and fiction in general) help us press through the darkness and find the “happily ever afters”. They teach us how to deal with the crazy, hard things that happen in our life, and learn good vs. evil. As G.K. Chesterson said:

We have so many “dragons” in our lives—those hardships and darkness that seem undefeatable. But fairytales teach us we can defeat the darkness and spread the light.

And what is the greatest source of light? LOVE. Because love is the key to all the good in the world. As I said in this post about love, it is the very thing that put Jesus on the Cross and paved the way to His waiting, open arms. Love is everything.

Which brings us back to Beauty and the Beast. 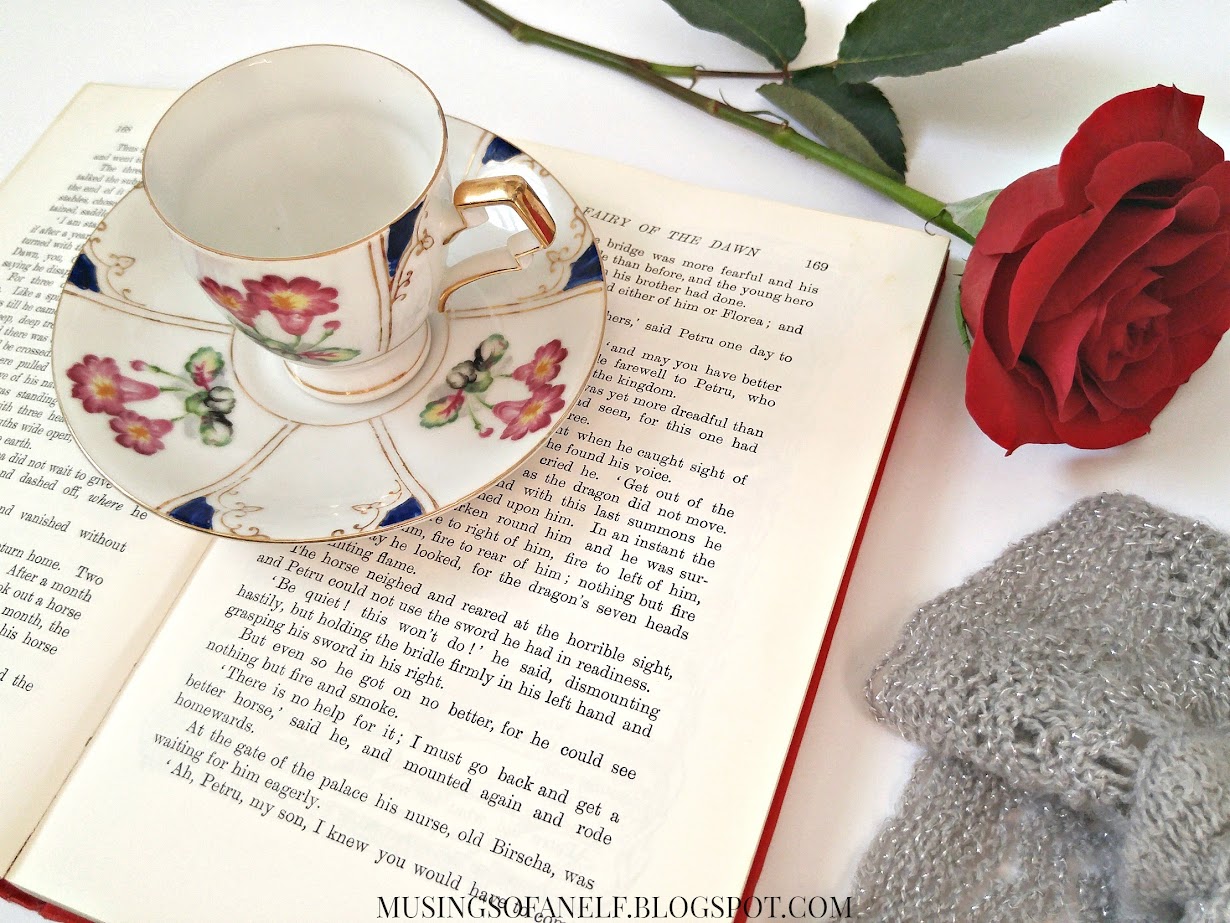 Many, many people see Beauty and the Beast as a story that merely glorifies Stockholm syndrome (which is what they call it when a hostage grows feelings toward their captor) and claims it’s okay to marry an animal (which, obviously, is anything but okay).

Now, again I’ll say, fairytales can be interpreted in so many ways, which is one of the reasons I love them so much. So if you think these things about B&B and  don’t like it because of that, THAT’S OKAY. Like I said in the disclaimer, this post is about my personal feelings toward Beauty and the Beast. And, obviously, we can’t all feel the exact same way about every story in the world. And why would we want to? That’d be boring! I love it when people interpret stories differently. It makes the story fascinating and deep, which is GOOD. That’s how we want stories to be. But because a lot of people feel this way about Beauty and the Beast, I wanted to explain how *I* feel about it since I am hoping to try to have my own B&B retelling published one day.

So let’s look at the Stockholm syndrome and animal-Beast problems.

Firstly, Stockholm syndrome. In the tale, the Beast actually does let Beauty go. And it is when she is free, that she realizes she loves him. Besides, it was always, always her choice if to marry him or not. And, on that subject, she was never forced into anything, never manipulated into loving him. She fell in love with the Beast because he was actually a total sweetie. Maybe he had his grumpy moments, but who wouldn’t when they’re cursed into being a hideous beast forever and isolated because of it, hmm? The Beast’s natural personality was actually virtuous and sweet tempered, which Beauty quickly realizes. He gave Beauty all the comforts in the world, and when she told him she desperately missed her father, he let her leave, knowing very well that she may not come back. Stockholm syndrome, I think, often arises as a form of survival. Hostages form a bond with their captors to avoid further harm. But in Beauty and the Beast, Beauty learns, within her first days of being in the Beast’s castle, that the Beast is by no means going to harm her. She realizes she need not fear him. She simply falls in love with him because he is kind. I don’t think it was ever the original author’s intention to pen a tale on Stockholm syndrome. 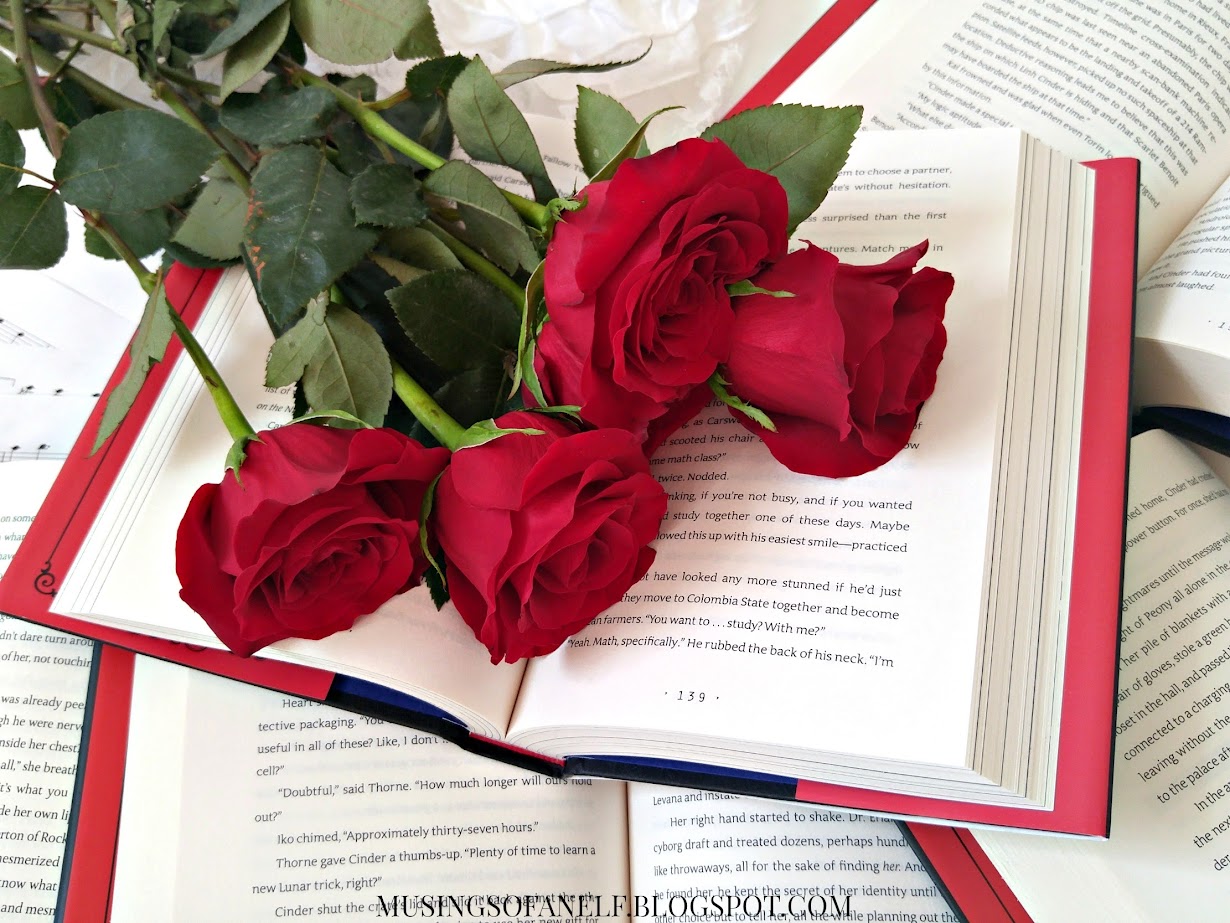 As far as the Beast being an animal, I personally believe that’s more how the person pictures him. Disney’s version of the Beast has actually bothered me for years. His appearance is far too animalistic for my comfort. (Though the original Disney animated movie is one of my favorites, but still.) Let’s not forget, the Disney version is a retelling itself. It drives me batty when people base fairytales off Disney’s movies of them. Disney’s versions are retellings just as much as any other. In fact, their movies pretty much never, in any form or fashion, resemble the original fairytales. (But that’s a rant for a whole ‘nother time.) The Beast we see in the movie is simply Disney’s own interpretation. And yes, there are a lot of illustrations picturing him as animal-like. But that doesn’t mean he has to be. The story never actually gives us details on his appearance besides calling him a “beast” and “monster”. But that can be interpreted into a million different ways. Now, some much more knowledgeable than me history buff may come in and comment that the original tale very much meant the Beast as having an animal appearance (and if that’s the case, do tell! I love learning the origin of fairytales), but I will say that the Beast is, in fact, human by the end, and was always originally a human. He was just cursed. So no, I don’t think this story is in any way claiming that it’s okay to marry animals. Still, I don’t like the versions that make him out to look animalistic, which is why in Burning Thorns my Beast is still very much human, just with deformities.

A lot of you already know Burning Thorns originally came about as a novella for Rooglewood Press's fairytale contest, and then I later decided to expand my novella into a full length novel. BUT, truth be told, I’ve been meaning to write a Beauty and the Beast retelling for, oh, probably over half my life. No joke. I adore retellings, and it’s my favorite fairytale, so it was inevitable I’d write one eventually. The contest was merely the shove for me to finally do it. And as I wrote a rendition of my favorite fairytale, I grew to love it even more.

Because, to me, Beauty and the Beast isn’t some weird story about Stockholm syndrome. For me, Beauty and the Beast is a powerful redemption story. I see it as an allegory about Jesus and us. We are all “ugly” beings, beasts in our own right, before Jesus’s redemption. No matter our unloveableness, He loves us anyway, and when we accept Him, He takes away our beastliness and makes us beautiful.

In the original fairytale, the Beast becomes the beautiful form he was always meant to be when Beauty gives him her love. BUT, Beauty does not, nor ever, love him for his appearance. She loved him before he turned back into a handsome prince. 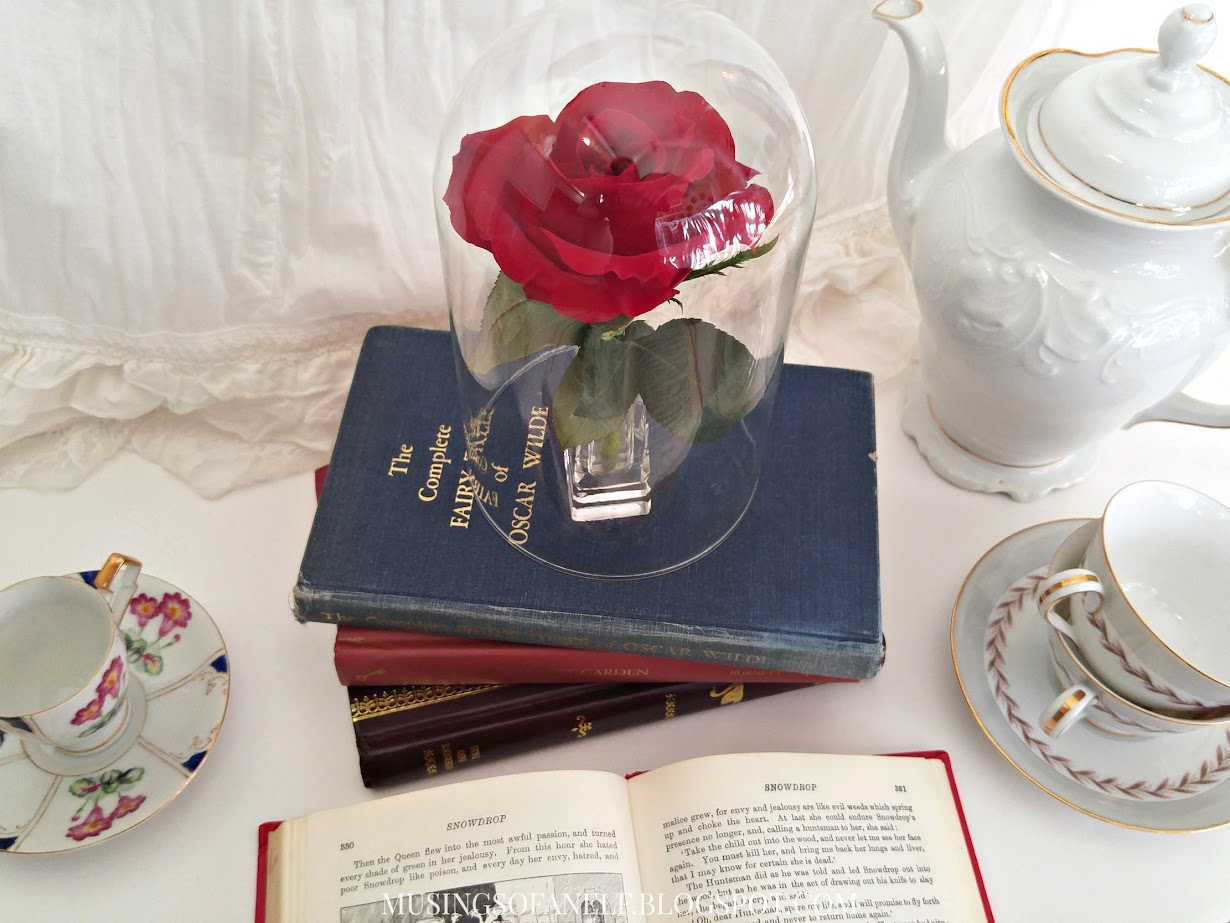 As I said earlier, fairytales can have so many meanings. Beauty and the Beast both teaches me the beautiful love our Savior has for us, and that beauty is in the heart, not appearances.

It’s a beautiful story and, unlike many, many fairytales, actually not super dark and creepy. For me, personally, it’s simply a tale about the most powerful, important, magnificent thing in the world: Love.

So yes, I love Beauty and the Beast and have loved being able to create my own version of it. Burning Thorns is about love and sacrifice and redemption and forgiveness. Because, even though it’s vastly different from the original fairytale, it still has the core themes that the simple little tale of Beauty and the Beast has taught me.

I’ll leave with you another quote by G.K. Chesterton (bless him). His single sentence encompasses everything I’m trying to say about Beauty and the Beast and are my exact feelings toward it:

“There is the great lesson of Beauty and the Beast, that a thing must be loved before it is lovable.”

Whew! I know that was long and opinionated. But I’ll say this one more time: This is my opinion. Some of you may know all about Gabrielle-Suzanne Barbot de Villeneuve (the author of the original novel) or Jeanne-Marie Leprince de Beaumont (the one who condensed the novel into the short, children’s story we know now) and what their original intentions for the story were. (And why they have the longest names on the planet.) But, again, this is just what the story means to me, and what I have taken away from it.

If you haven’t ever read the original Beauty and the Beast story, or are just in the mood for it, you can read it HERE. I highly recommend it. It only takes about five minutes and, well, it’s my favorite fairytale. Obviously I recommend it. *grins*

Okay, guys, it is finally your turn! I am hushing now and handing over the mic…er, the comment section, to YOU. What are YOUR thoughts on Beauty and the Beast? (If you have opposite thoughts from mine, don’t hesitate to share!) What do you think of fairytales in general? Which one, if any, is your favorite??? I NEED TO KNOW. Let us discuss!

Posted by Christine Smith at 7:22 AM