We interrupt your peaceful blog reading to announce. . .

*cue the scrambling around, hastily making plot notes, assuring coffee supplies are sufficiently high, all affairs are in order, laundry is caught up, and farewells to your friends and family are taken care of*

Yep. In 10 days those bravely insane writers will be locking themselves up in their writing spaces to pound out 50k or more words in a month, only showing their bleary-eyed faces for more caffeine. Because writers aren’t already mad enough people, right? Of course not.

Last NaNo I was quite on top of things. I had my entire NaNo outlined, a book cover put together, and everything ready and set up to write all by the 12th of October. And then there’s this year, where I have only ten days left and I haven’t even updated my NaNo profile yet. But hey, what’s NaNo without a little panicking? Keeps things interesting and me on my toes and alert. Right? . . .Riiight?

Really, my distressingly behind schedule hasn’t exactly been my fault. Because when plans look at me, they laugh and turn in the other direction.

Recently we decided to sand and put new coats of polyurethane on our floors. Which resulted in taking out all the furniture and leaving the house for a couple days after the coats were applied. Not exactly much time for NaNo prepping during all that chaos. Of course, our water heater and washing machine decided to both break the same weekend we did the floors. I mean, when else would they break, right? During a more convenient time? Pffft. What a silly idea. And obviously I had to get a nasty cold before any of this and it didn’t want to leave so stuck with me some during the chaos as well, leaving me far too out of it to even consider NaNo plotting. Oh, whatever, Mr. Cold. NaNo is only in a few weeks. It’s not like I need to have a clear head to plot. How about you stay a while? That’s fine.

Eventually my cold did go away, we got the water heater and washing machine problem taken care of, the polyurethane dried and furniture was returned. Life slowly seeped back into normalcy. Ah, now I can jump into NaNo prepping!

I did. But only a little. Next thing I knew we were headed out of town for a couple days. No problem. I can plot during the car ride.

Well, our “couple days” turned into many days because my family is insane and why not have a mini vacation? We’ve already driven this far. It’ll be fun! And thus an extremely impromptu road trip ensued. But our life being how it is, things didn’t exactly go as planned. Of course. . .we didn’t plan anything. Us and planning do not go hand in hand. But the things we thought we could do didn’t really turn out. Still, it became a very memorable trip, hectic as it was. Best of all, we found the biggest secondhand bookstore I’ve ever seen in my life. It was literally the size of a warehouse and two stories high with thousands upon thousands of books of every kind imaginable. I spent two hours on one aisle alone. I’m pretty sure I got a glimpse of heaven when I walked into that place. And I walked out with bags full of happiness. 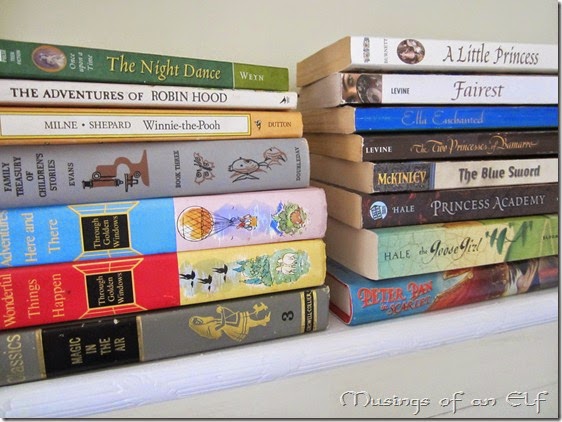 Ah, if only I had had more time and money. Then again, we probably would have had to attach a trailer to our vehicle just to carry all the books home. Still, my heart flutters every time I look at the treasures that did come home with me.

Then there was the place I found twin elvish swords with a plaque and all on sale for a shockingly low price. To say I was excited is an extremely mild way of putting it. I’ve wanted a medieval and/or fantasy type sword to display on my wall for yeeeears. And then I found these. Well, you can imagine my ecstasy. They’re still packaged up, so I don’t have a picture but they’re basically replicas of Legolas’ twin blades from Lord of the Rings. 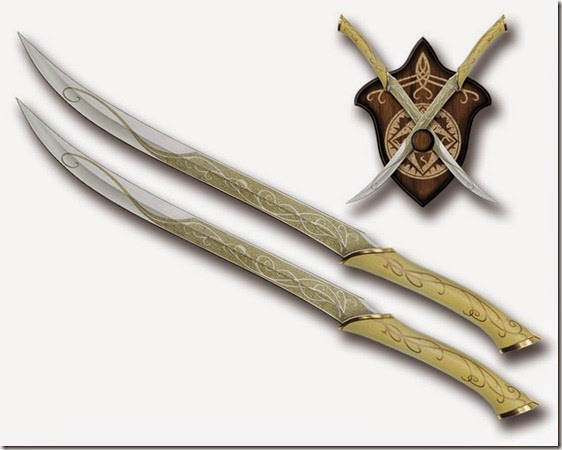 Except mine have red hilts for some reason. I wish they were exact, but still, they’re scrumptious. And that’s the same plaque mine came with.

Though the impromptu vacation was rather hectic and nothing went according to plan, many good things came from it. But, as you can probably guess by now, not much NaNo planning went on during riding in a vehicle with many people, drooling over books and prettyful swords, being distracted by the gorgeous scenery outside (God has blessed us with some beautiful weather), and attempting to share single hotel rooms with the whole family. But, as of last night, we made it back home safe and sound and now, maybe, hopefully, this week I can buckle down and work on some serious NaNo planning. Of course, I’ve said that every week this month and you’ve seen what has happened. But I shall prevail! Thank goodness for caffeine.

Of course, NaNo planning isn’t the only thing demanding my attention. I’m also participating in Rooglewood Press’s Five Enchanted Rose’s contest, as mentioned before, and my entry still has a heavy amount of editing pressing down on me. 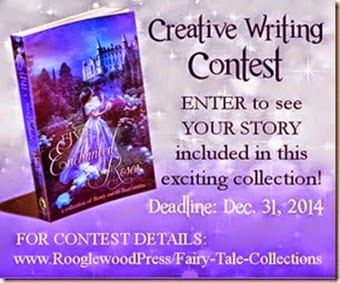 It was my hope to have it done by the end of this month but that’s looking less and less likely the further into the month we get. The idea of working on it during NaNo, well, doesn’t sound fun. So I’m not sure what I’m going to do. We’ll see how much I can get done in ten days and then figure out the rest from there.

So the plan for right now is to dive into finishing up my NaNo’s outline, which, honestly, is very close to the end. Then I need to work on a few other NaNo things—make a book cover, write a synopsis, put together a calendar to keep up with my wordcount, something I do every year, fix up my NaNo profile, just little things here and there. And, of course, see about editing what I can of my Five Enchanted Roses entry. Suddenly I’m glad the word limit was only 20k. And in the midst of it all, do my very best to not throw away all responsibility and reason and instead devour all my new, scrumptious books. That’s going to take a lot of willpower, let me tell you.

Oh yeah, and I probably shouldn’t just entirely ignore life. It does get left behind sometimes. . .

Phew, it’s going to be a wild ten days. And then I’ll be thrust right into NaNo, which brings on even more frenzy and life ignoring. But to me, it’s worth it. Life is crazy, yes, and trying to write 50k words in a month doesn’t exactly aid in making it calmer. But knowing you’re writing right alongside thousands and thousands of other writers all around the WORLD. . .wow. Let me tell you, there’s nothing more magical than that. To me, insane as it is, NaNo is my favorite part of the year. It’s my Christmas, and however chaotic and stressful it may be, I wouldn’t give it up for anything. So maybe I’m a little behind on my planning, and from the looks of things next month might be just as crazy as this one, but I’m still counting the days in excitement for the calendars to turn to November 1st.

Posted by Christine Smith at 6:04 PM