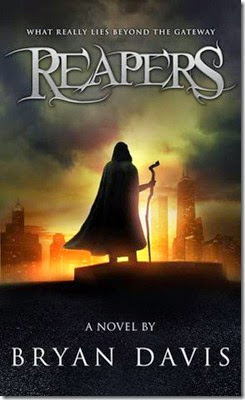 The Reapers Trilogy is a dystopian tale with a supernatural twist that takes place in a futuristic, urban setting. Two teenagers, Phoenix and Singapore, male and female Reapers, collect souls of the dead and transport them to the Gateway where they will travel to their final destination. . .or so they are told.

You probably all know by now that Bryan Davis is one of my favoritest of favorite authors. So when he announced he was writing a dystopian story, well, I had to get my hands on it, especially while I’m writing my own dystopian novel.

I really didn’t know what to expect from this book. I knew I was going to like it, but it was so different from Davis’s other stuff. I mean, a Christian author writing about ghosts and people who collect souls? That seemed a bit odd. But I loved this book. It became an instant fave!

Our story takes place in a futuristic Chicago where the world is a much sadder, more struggling place. Not much goes into detail about why the Earth has taken on its dystopian state, but I actually liked that. It gave a bit of a mystery to it that added something to the story. The main character, Phoenix, is known as a Reaper, which is, in fact, a person who collects the souls of the dead. These Reapers transport their collected souls to the Gateway where, supposedly, the souls will have peace. If a soul isn’t reaped, it will roam the world as a ghost until a Reaper finds it and absorbs it in their special, soul reaping cloaks.

Phoenix goes along with the system, just waiting for his time as a Reaper to end. Although he can’t just sit around and do nothing. Even though it’s his job to reap the dead, his conscious doesn’t allow him to sit idly by while people drop like flies. He does his best to smuggle medicine to those in need, even though he knows doing such could get him in big trouble. Still, it helps give him some peace in his lonely, gruesome life as a Reaper. Just until his time is done.

When Singapore, a new female Reaper, pops into his life, Phoenix really begins to question his existence. Maybe the Gateway really isn’t what he’s been told all his life. With the help of Sing and another female Reaper, Shanghai, Phoenix tries to get to the bottom of all the questions and doubts cropping into his mind.

Pros
The biggest thing I loved about this story was the pacing. There was never a dull moment. The constant action, intriguing plot, and confusing riddles kept me interested from page one to the last. The writing style was a quick, easy read, keeping you turning those pages fast. Overall, I found the writing in this book a good bit superior to Davis’s other novels. As much as I love his stories (in fact, his Dragons in Our Midst/Oracles of Fire series are my favorite books of all time), sometimes the writing can get a bit cheesy. The dialogue especially in Reapers felt so much more real compared to his other stories. Very rarely did I feel the narration or conversations getting over the top of cheesy. It all flowed nicely, making the characters jump off the pages.

The plot itself was fascinating. I wanted to know what was happening, making it impossible to put the book down. Davis always has a knack for coming up with such intriguing, complicated plots, which is why his stories are some of my favorites. Reapers was no exception. I kept flipping those pages, desperately wanting to discover the answers to all the riddles.

The villain was quite nasty. Which, yes, is a pro in my book. There are some villains you love to hate, and this gal fits that description too well. She kept the characters in a constant state of distraught and made so much tension on those pages. I think *I* physically tensed up when she made an appearance a few times just because I knew something horrible was about to happen. She was not someone you wanted to mess with! All the tension and emotion in the book was all so well done.

The character Singapore (or more commonly known as just Sing) was my favorite. She was a precious girl, but also had so many mysteries revolving around her that intrigued me so much. I love characters that are good but also have deep, dark secrets. So I super, super enjoyed Sing’s role in the book.

Cons
Unfortunately, I wasn’t real wild about the Reapers protagonist. Phoenix just didn’t have that loveable nature I’m accustomed to in Bryan Davis’s characters. Now, I didn’t hate him by any means. In fact, sometimes I liked him a lot. But overall I wasn’t crazy about the guy. He had a lot of good morals and was always trying to do the right thing, but sometimes I felt as if his motives weren’t in the right place. He has a lot of growing to do. But that’s not always a con. I suspect by the end of the trilogy I’ll like him a lot. Having a protagonist that needs to learn and grow is usually a key element to a story as long as they do end up the better by the end. So I won’t totally mark Phoenix as a con, he just annoyed me from time to time.

Shanghai also had a lot of problems that got on my nerves. I just never could really like her as hard as I tried. I hope she’ll grow a lot as the story goes on as well.

But Sing made up for both of them, so I won’t complain too much.

Being as how this was a Bryan Davis book, I was expecting a Christian conclusion to why souls could be reaped and ghosts were roaming everywhere. Yes, it was a supernatural story, but Davis always has deep, Christian messages in his tales, so I put up with all the weirdness because I figured it would be explained in some form or another. His other stories have a lot of strange, questionable things going on as well, but there was always a reasonable conclusion to them. Well. . .I never really got my answers in this one. It was all so very supernatural-y I was a bit uncomfortable with the whole thing. I mean, WHY can souls be reaped or turn into ghosts? That’s just not how things are done. BUT, with that said, this was only the first book of a trilogy, and most of the mysteries were not solved by the end. So, I’m giving the author the benefit of the doubt and holding out hope that all will be explained with a good message by the end.

And, as you can probably guess by now, it did have a very cliffhanger-y ending. Sometimes I like those, sometimes I want to scream at the author and ask WHYYY??? With Reapers I was a little bit in between. I felt fairly satisfied by the end, but I also felt like there could have been a little bit more of a conclusion to all the many, many questions thrown across the pages. By the end I was just more baffled than before. But that will just make reading the next book all the more enjoyable.

Warning
This book is about death, so there is a lot of morbid imagery going on. And be aware it’s action packed, which means multiple fight scenes. They were never too gruesome, but I’d be very wary of this book for younger readers. There is also quite a bit of intensity to it and some shocking events. It’s a much darker, grittier story than Davis’s other stuff, which I personally appreciate, but I just want to make sure everyone is aware.

Conclusion
Despite a few things I didn’t like, not to mention just the supernatural theme of the story, I loved this book. I couldn’t wait to find free time each day to read it and it kept me up late a few nights. Just know, it is set in first person, which used to would have been a major con to me, but I’ve grown to like first person and it worked well for this story. It was also in general just vastly different from Davis’s other novels, so if you’re expecting his normal sort of thing you might be a bit surprise. But, like I said earlier, there were a lot of elements to this story I found better than his older stuff. It had just the right action, intensity, and intriguing plot that put it on my favorites list. I hope to goodness the next book gets written fast because I NEED TO KNOW WHAT HAPPENS.

Posted by Christine Smith at 5:01 PM