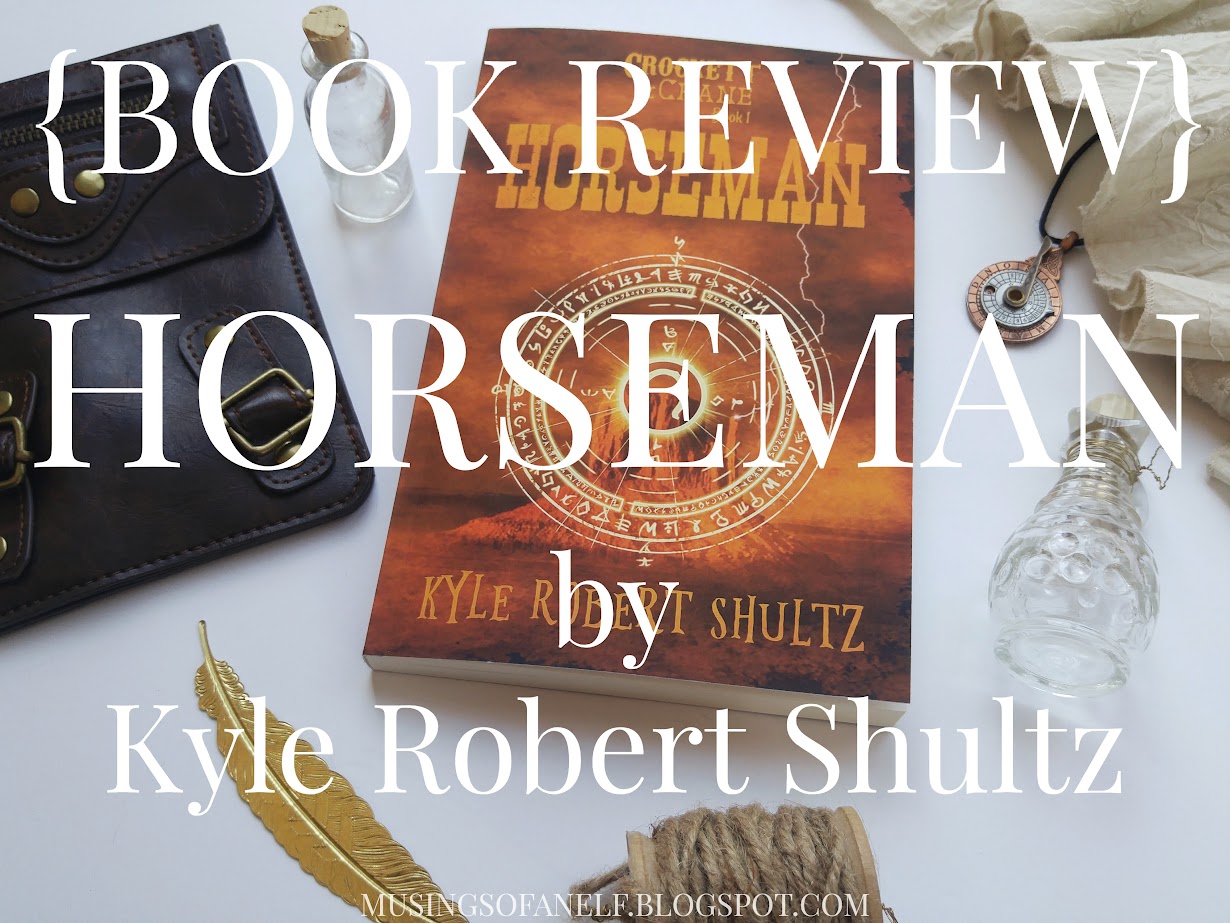 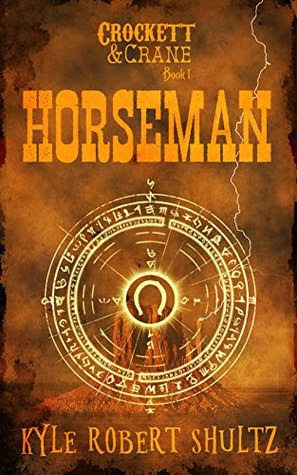 A new series from the author of the acclaimed Beaumont and Beasley novels!

In the year 1790, monster hunter Ichabod Crane searched for a mysterious creature called the Headless Horseman. His quest ended in an embarrassing failure that marked his family with disgrace for generations.

Now, in 1891, his descendant Todd Crane is determined to prove that the Horseman is real. There's just one problem—Todd is a professional con artist and a seller of unlicensed magic potions. This puts him on the wrong side of the law and right in the crosshairs of US Marshal Amy Crockett.

As the Horseman returns to menace the western frontier, Todd and Amy must join forces to stop the monster once and for all. But if they're going to succeed, they'll have to make sacrifices that will change their lives forever.

Enter a Wild West where centaurs wear six-shooters and monsters roam the plains. Welcome to the United States of Neverica.

The Crockett and Crane series is perfect for fans of Indiana Jones, Supernatural, or Sleepy Hollow. It is a spinoff of the Beaumont and Beasley series.

This book was honest to goodness just as delightful as the B&B series. With similar threads and the author’s trademark humor, but also overfilling with new twists and settings and concepts that made it stand totally on its own. It hooked me with that first sentence, and had me glued to the pages and grinning all the way to the end.

Unlike the refined London-like setting of Beaumont and Beasley, where most people believe magic is purely a myth and fairytales are just that, tales, the Crockett and Crane series is set in the wild west of the United States of Neverica (gotta love it!) where magic potions and mythical creatures run rampant.

I’m gonna be honest with you guys. I, erm, don’t like westerns. Really at all. It’s one of my least favorite genres. I’M SORRY! It’s just never been my thing. The hot, dusty setting makes me feel…well, hot and dusty. But Kyle did the impossible. He made me love a western! I mean, come on, a western full of magic and mythical beasts and retellings and humor? I can get on top of that! Yes, I like the setting of the B&B series much better, but this book was so fun and charming in its own way.

Where the Beaumont and Beasley series focuses on fairytales, the Crockett and Crane stories are more legends. Horseman is centered around The Legend of Sleepy Hollow, which was a fun and different twist. But, just as the rest of Kyle’s stories, this one takes place after the events of Sleepy Hollow. (Thus the reason the universe all these books are set in is called the Afterverse.) Well, sort of after the events. IT GETS COMPLICATED. But it is awesome! Trust me.

Aaaahhhh! The characters! I wanted to be part of this band of unlikely heroes SO BADLY!

TODD CRANE: Todd is our protagonist and POV character (it’s told in first person through his eyes), and was a riot all around. Not only can he turn into a CENTAUR via a magic ring whenever he likes (SO. FUN!!!), he’s also a heaping pile of dry wit and wild ideas. Todd lives on the edge—travelling around the country, illegally selling magic potions and conning everyone he crosses. But there’s more to him than that. I loved seeing his story unfold and discovering who Todd really is. Also he’ll go to ridiculous lengths to avoid talking about his feelings and just… Todd. *shakes head* I can’t with him. XD Oh yeah, and he’s the descendant of Ichabod Crane. You know, The Legend of Sleep Hollow Ichabod Crane? Yep, yep. Fun stuff!

AMY CROCKETT: The descendant of Davy Crockett. (Cool, right?) This spitfire of a girl was the perfect match for Todd. Their banter literally gave me life. Where Todd is a conman and doesn’t really pay any mind to the law, Amy is a US Marshal and lives for it. Sooo yeah. They had a biiiit of a difference of opinions. It was absolutely hilarious seeing them try to work together. But Amy is not all rules and regulations. She’s got a big heart hidden away behind that strict persona, and will do anything (even not entirely legal things) to keep people safe. I loved the complexity of her personality and seeing her become her own. (Also watching her constantly put Todd in his place was the best thing ever.)

MEG: Meg was the sweet cinnamon roll child that must be protected at all costs and I loved her. Can I just adopt ALL the cinnamon rolls in the world pleasandthankyou? I do love those female spitfires like Amy. But I always so appreciate seeing sweet, tenderhearted females like Meg as well. Her kind heart balanced out Todd’s and Amy’s rather rambunctious, sassy personalities. Buuuut Meg was not all fluff and rainbows. She’s also extremely dangerous because of…reasonssss. *grins* What she is was so contradictory to her personality and I LOVED that. It was completely unexpected!

JULIO: JULIOOOOO!!!! Easily my FAVORITE part of this entire story. He’s a young Mexican man with a sweet heart and…oh yeah, HE’S A SHAPESHIFTING DRAGON! His lines always, always had me rolling. Such as when he was insulting someone and called them a “thingy” because he didn’t think it’d be appropriate to use the word he wanted to. He was so thoughtful and innocent and precious even though he’s a DRAGON and I CAN’T. I need more Julio on my life nooooowwww!

The story centered around those four, though of course there were other very intriguing side characters at play. This whole story just came alive with colorful characters. (Such as Rex and Joy which was another one of my favorite bits of the story!)

And this story had one of my FAVORITEST tropes ever—The-Motley-Crew-Becomes-a-Family. Todd, Amy, Meg, and Julio—despite their differences—eventually learn to work as a family group and LSKDJLFKJLKSJDF. I LOVED IT SO MUCH.

- ALLLLL THE MAGIC. Like I said, in the setting of the Beaumont and Beasley books, magic is something hidden and secret. But in this one, magic is used by eeeeeveryone. The wild west is really wild. Mythical beasts like centaurs, wulvers, sasquatches, and the like are common sights and citizens. While potions and magically imbued items are used by absolutely everyone. It’s just a way of life. And I LOVED that. Todd was especially potion happy, and it was a delight seeing what spell he’d use next.

- A TOUCH OF TIME-WIMEY. Rip Van Winkle plays a part in this story. Which is awesome in its own right. But there’s also a smidge of timey-wimey stuff going on, and complicated time travel stuff is my faaaaaave so just YESSS.

- HILARIOUS CHAPTER TITLES AND DESCRIPTIONS. If nothing else, this book is worth reading for this alone. Every chapter has a title and super funny description of the chapter underneath. For example:

In which Amy steals my legs and tries to murder me.

- DARK AND HUMOROUS. This story isn’t all laughs. A lot of it, absolutely. But there was actually some surprisingly tragic and creepy things going on. And I guess I’m a disturbed individual because I loooove when books are kinda dark and creepy and tragic but ALSO with pleeenty of humor to balance it all out. And that’s precisely what this one was! I wouldn’t label it a dark book really at all, don’t worry. But it had enough depth to punch you in the feels a couple of times. GOOD TIMES!

- NODS TO BEAUMONT AND BEASLEY. If you have not read the B&B series, NO FEARS. This book stands entirely on its own. BUT, if you have read the B&B books, there are a couple of delightful cameos waiting for you. A couple of parts had me shrieking (in a good way). I loooved the little nods to us B&B fans!

- PLOT TWISTS. Quite a few events took me by utter surprise in the best way possible. Things especially took an epic turn halfway through. I just thought I was enjoying the story. But by the halfway point I was UTTERLY IN LOVE. Of course, I’m not revealing a thing. *zips lips* JUST READ IT!

- JULIOOOOO!!! Ahem. Just had to flail one more time…

Nothing…? I’m trying really hard to think of anything but… *shrugs* I really loved every bit of it!

I guess the dusty western setting still wasn’t my favorite. BUT, at the same time, the idea of the wild west being wild because everyone is using magic and there are mythical beasts running around everywhere is seriously one of the most brilliant, original ideas I’ve ever read. Besides, I’m like the only one I know who doesn’t love western settings. So if *I* enjoyed Horseman this much, you guys are gonna LOVE it! 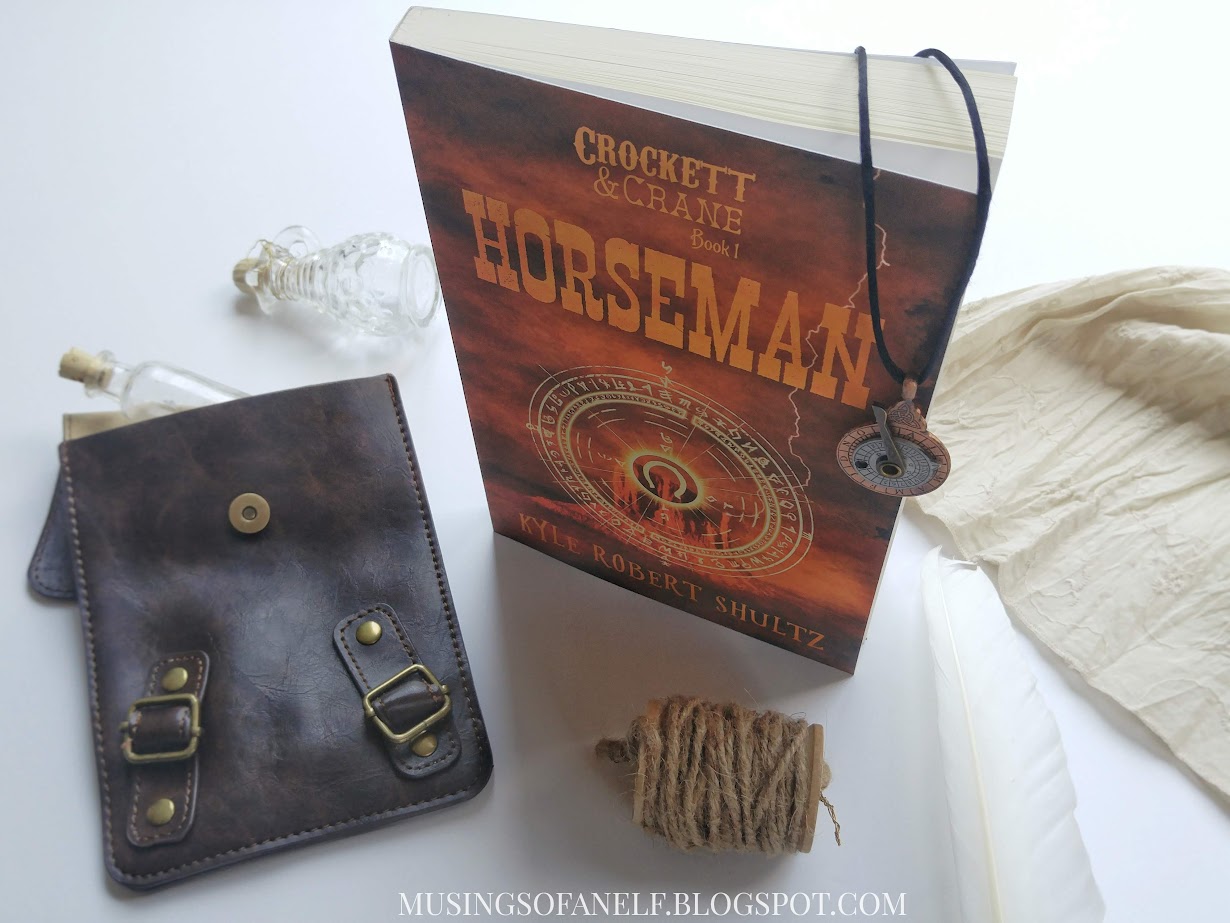 Not a thing. Perfectly clean all throughout. Although, like I said, it does get a little creepy. Though the humor kind of cancels out the creepiness. But there are still a few dark things going on.

Also there’s LOTS of magic of course. Just warning you if that’s not your thing.

If you’re a fan of the Beaumont and Beasley series, you’re going to LOVE this spinoff series. If you’ve never read the B&B series, you’re also going to love this series!

Where else can you get a story about a motley-crew-turned-family and protagonist who can turn into a centaur, set in an alternate version of the wild west where magic and legendary species runs, erm, wild, all centered around The Legend of Sleepy Hollow with humor and colorful characters galore???

This is a hilarious and unique novel, and if you like retellings or fantasy or westerns or all of the above, THIS ONE’S FOR YOU!

NOTE: You can read this story for FREE. RIGHT NOW. Because it’s up on WATTPAD. Of course, if physical copies are your thing (I’m with ya) you can still order one. But if you’re aching to read it this very second for free, get ye over to Wattpad this instant! You won’t regret iiitttt. 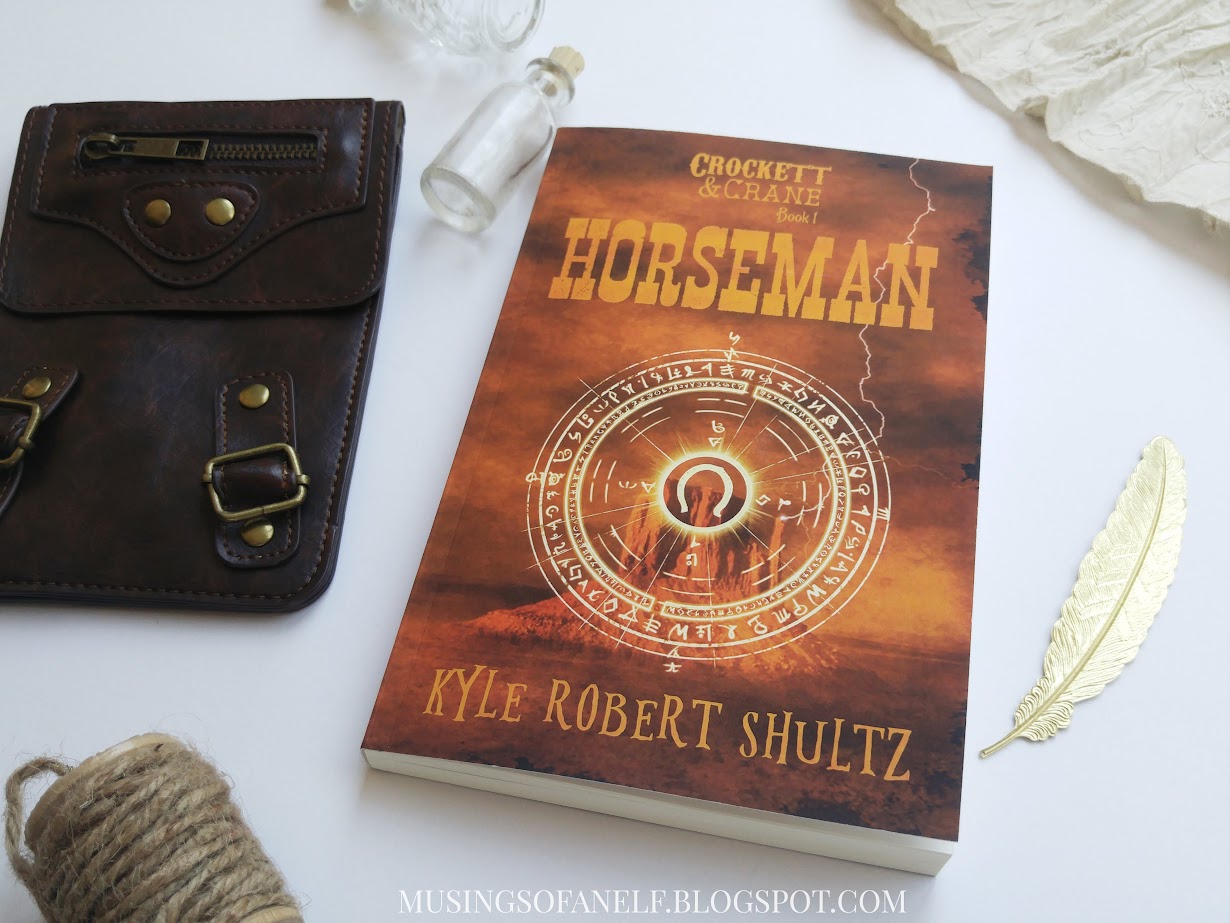 Have you read Horseman? Are you going to??? (The answer is yes.) And how do you feel about westerns and/or legends retold?

Huge thanks to Kyle for sending my a physical copy of Horseman! I was under no obligation to write a review, and certainly not a positive one, but I HAD TO FLAIL! And convince you all to read this book. Bwahaha!
Posted by Christine Smith at 10:25 AM