I am currently in a vigorous escapade of writing the big ol’ climatic ending of Burning Thorns. I’ve been writing, well, a lot lately with my 30k word goal in June and now pushing forward to make it to the end of the story.

This is how we all feel when getting to the ending, right?

Due to all the writing, I was recently feeling some burnout and really just wanted to close my laptop and go take a long nap. (And by long I mean like a week.) Writing is my life passion, but sometimes you can have a little too much of something, no matter what it is. (I mean, Ice Cream Mountain sounds like a glorious idea but once the tummy aches start settling in we may rethink it. . .maybe.) I still really, really love Burning Thorns. I had no real problem with the story, it was just the writing all the time that was getting to me.

Then this last week I finished all the parts leading up to the climax and delved right into the actual thing. And you know what? Writing suddenly felt like magic again. I wanted to write, I still want to write. I’m excited about writing all over again and am encouraged that I can make it to the end, and soon.

I mean, all the characters are together and each have their own agendas and some are threatening others and dark fae are attacking and it’s a big, horrible mess and. . .

Why am I so excited about writing this rather traumatic stuff? I asked myself this and I realized: I love endings. Writing endings anyway. Finishing reading a book I love or a TV series not so much, but writing those endings? Exhilarating!

So this got me thinking about different sections of writing.

I always think I love to start new stories. Having a blank canvas with endless possibilities is such a thrilling thought, right? But then I sit down and stare at that blank canvas and suddenly all those endless possibilities are not so thrilling but overwhelming. I’ve got to find the perfect sentence to start out with, figure out an entire world, discover numerous characters, and then there’s that plot thing that is apparently important. Overwhelming, much?

The first time I actually realized that beginnings really aren’t my thing (despite thinking they were for like my whole writing life >.>) was during NaNoWriMo 2013. I had outlined, made thorough character bios, the whole balooga (we’re pretending that’s a word, okay?), not to mention this was the fourth book in a series so I knew the world quite well. But no amount of outlining and character bios can make you discover your characters and story like actually writing. This was my first time in these characters’ heads and it took some time to really grasp their voices, their emotions, their way of life. It took a while to establish myself in the story world.

For me, beginnings are awkward and slow and take a lot of work.

Literally me trying to write beginnings. Hours of work, no progress.

But not just with the beginning of stories. I also do this with the beginning of a chapter, or even just a new scene. Basically, I don’t like establishing scenes. Having to come up with clever ways to open the scene and set it up and show who’s all there and what’s going on hurts my wee brain 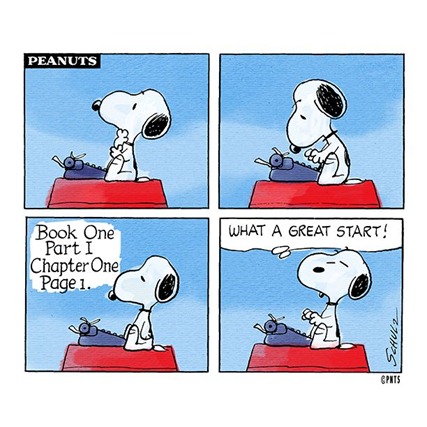 Starting out something new is so hard to me, but once I’ve got everything setup and the momentum going, it’s smooth sailing. Even if I take a long break from writing and come back to the middle of a scene, I can jump in so much easier than when I have to begin with an entirely new one. I need everything established already before I can really begin moving. Because of this, the first few chapters are hard, but once I’ve gotten past the first two or three, I do start really enjoying the writing. Beginnings may not be my thing, but I guess almost beginnings can be a lot of fun.

So what about that ever intimidating middle? I have mixed feelings in that area. On the one hand, by the time we’re at the middle, things are definitely established, my characters and I are quite familiar with each other. So honestly, I rather like middles. They’re the meat of the story after all. While beginnings are appetizers and endings are the long sought after dessert, beginnings are the main course. And, well, I really like meals. What can I say?

BUT middles can be daunting. Sometimes you start eyeing that dessert and realize with dread you still have half your meal left that must be finished before you can even have a lick of that cake. I can absolutely get burned out in the midst of all the middleness. But I (try) to keep trucking along because. . .

That’s the main reason we eat meals, right? For the dessert afterwards? (Don’t tell me you disagree.) The appetizer and main course were good, but gimme dat cake!

I love endings. But again, not just story endings. I love chapter endings as well. Like I said, once everything is established and that momentum has kicked in, everything starts flowing so much easier. I write the second half of a chapter probably two or three times faster than the first half.

And then we get to the actual ending and ah, I love it! I don’t know if I’ve ever written an ending where I wasn’t having fun. There are many, many moments in writing where it feels like such a chore and I question my life choices. But then I get to that climax and remember all over again how delicious writing can be (see what I did there?). Basically every word has led up to the climax, all that work now comes together for this moment.

While before I wrote at a snail’s pace, endings is where my inner ninja kicks in and the words just explode from my fingers. If only that would happen the rest of the time. . .

In conclusion, I love writing endings. (You know, in case you haven’t grasped that yet.) I love seeing everything come together, experiencing the excitement (and drama) of the climax, and then the (usually) happy finale where everything has been fixed and my characters can get on with their lives without their author torturing them.

And, you have to admit, finishing a book is probably the best feeling any writer can have. Too bad it takes so painfully long to reach those endings. But it’s worth it. So very, very worth it!

Now watch the ending of Burning Thorns be painful and fall like molasses since I’ve written all this. Because my life is like that.

Okay, I’ve babbled waaaay too much and am dying to hear your thoughts on all this. What is YOUR favorite part to write? Am I the only one who has the hardest time starting things out? Or maybe you love beginnings and endings daunt you more? TELL ME. Seriously, I’m insanely curious how everyone feels about this.

Posted by Christine Smith at 11:33 PM