Yes, it’s that time again! Okay, it has been that time for nearly 3 weeks now, but didn’t we learn from last week’s post that I’m always late to parties? Hey, I never said I was a good role model.

I’m sure you know the drill. Beautiful People is a linkup for writers by the ever awe-inspiring Sky and Cait. They give us ten questions to answer about any character we have of our choosing. Always a good time! BUT being as how this is the month of flowers and heart-shaped things we get a special edition centered on, you guessed it, COUPLES. Now I know the romantic in you is itching to get in on this, don’t deny it. There’s still a week (okay, almost a week) left of February! So get your warm and fuzzy hearts on over to Sky's post or Cait's and linkup! Even those of us who don’t write in the romance genre constantly find those heart-shaped things slithering into our writing, am I right? It’s inevitable I fear.

For me, this edition of BP popped up at just the right moment being as how I’m deep into plotting for Burning Thorns, my Beauty and the Beast retelling. And with a B&B story comes a romantic couple, obviously. This is just what I need to get deeper into their not-always-so-fluffy-but-still-rather-sweet relationship.

Allow me to introduce my Beauty and Beast, Rose and the Beast (or the Dragon, he’ll answer to either, probably not politely but he will answer). 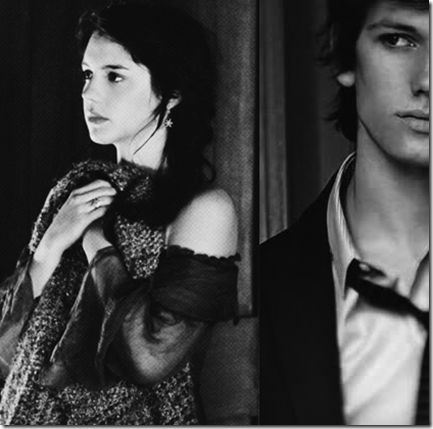 The Beast had barely stepped through before the girl zipped past him, bare feet tapping across the hall as she hurried to the fire.
"Rain really has no right to be so icy this late in spring," she said, holding her palms out in front of the flickering flames.
The Beast eyed the trail of dirt on the once polished floor leading to the girl. He stomped the mud from his own boots and gave the doors a mighty slam. The girl jumped.
"This way," he grunted, moving to the far left end of the foyer to the wide stairway.
The girl chased after him.
Patter, patter, patter.
One new dirt spot with each step.
He growled under his breath and led her down the vast halls of the second floor, the walled candles guiding their way.
"I appreciate your hospitality," she said, bouncing up next to him. He quickened his steps ahead of her. "I mean, I'm not really sure what I'm going to do now. Since I'm on the run and all." Her words faltered, but in seconds returned to that quick, jaunty tone. Did she always talk like that? "I'm sure I'll figure something out though."
"I'm sure." He shoved open a door and stepped aside, head low. "You may sleep here." He had already made it halfway back down the hall when her response echoed after him.
"Thank you! I never knew dragons could be so kind."

1. How long have they been a couple?
Well, they first meet at the beginning of the story and don’t become a “couple” until the end you could say. I haven’t entirely figured out the timeline yet, but I’m thinking the whole book takes place in a manner of a couple months maybe? Still working out how long everything progresses. Since this is a novella being turned into a full novel, constructing a timeline is hurting my brain a little.

2. How did they first meet?
It was a dark and stormy night. . . No, but really. It was raining torrents and Rose was running for her life from people who wanted to enslave her. She got entangled in the Beast’s rose garden, he found her, nearly sent her away but realized she might be just the person to help him break his curse. . . Maybe not in the way you may think though. *wriggles eyebrows*

3. What were their first thoughts of each other? (Love at first sight or “you’re freakishly annoying”?)
Rose found this tall man completely clad in black a little intimidating, but when he offered her a warm place in his castle she decided he was very kind. (Ah, naïve little Rose. . .) While Rose’s chatty, over perky personality definitely grated on the Beast’s nerves.

4. What do they do that most annoys each other?
The Beast thinks Rose talks way too much. Rose thinks the Beast is too quiet. Yeah, some issues to work out there.

Let’s just say Rose and Beast are like putting a frisky puppy and an old, bored cat together.

6. How would their lives be different without each other?
Rose would probably be living a torturous life of enslavement in enemy lands.

Beast would forever be cursed and probably out of his mind from hatred and solitude.

Needless to say, it’s a good thing they stumbled upon one another when they did.

7. Are they ever embarrassed of each other?
This is about the same answer as the things that annoy them. The Beast often wishes Rose would cease her constant chatter and let others get a word in every now and again, and Rose wonders why oh why the Beast won’t participate during social events.

8. Does anyone disapprove of their relationship?
Oh, just about two, maybe three, entire kingdoms. Apparently associating with the Dragon that thrust the world into shadows and chaos is frowned upon. Who would have thought?

9. Do they see their relationship as long-term/leading to marriage?
This is a fairytale. What do you think? *winks*

10. If they could plan the “perfect outing” together, where would they go?
The Beast lives in an enchanted forest filled with all sorts of otherworldly wonders. He’d love to take Rose on a picnic to some beautiful, magical place in the Forest where she could play with sprites and pick flowers. Yes, despite all you’ve just learned about the Beast, he can be a romantic.

Now I have a question for YOU.
Who is your favorite fictional couple?
I LOVE hearing about everyone’s favorites, so come, gush. I beg of you!

Posted by Christine Smith at 6:02 PM