“It's a dangerous business, Frodo, going out your door.
You step onto the road,
and if you don't keep your feet,
there's no knowing where you might be swept off to.”

My sweet blogging friend Arwen (whose blog is private, so no links I fear) has put together an absolutely brilliant Lord of the Rings/The Hobbit tag and passed it my way. I may have squeed with excitement a teeny bit. Naturally. Thank you so much, Arwen!

Off we go then, to roads unknown and adventures grand! Erm. . .I mean to the tag. Yes. 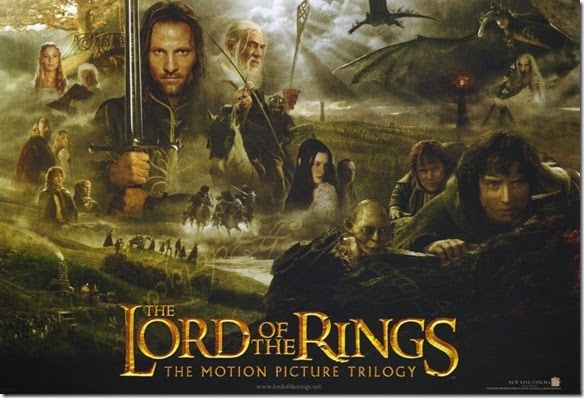 -Link back to the blogger who nominated you
-Answer questions
-Tag some of your own fellow Tolkienknights!

1. How were you first introduced to LotR/TH and was it love at first sight/read?
One day I found my mom and brother settled into my brother’s room about to watch a movie. I asked if I could watch it with them and they said it’d probably be all right as long as I closed my eyes during some parts (I was 10 at the time). The movie turned out to be the newly released Fellowship of the Ring. Love at first sight? HA. I was so enthralled it literally changed my life. It introduced me to fantasy, to Tolkien, to everything I know and love today. I immediately read The Hobbit book and picked up Lord of the Rings right after. And I’ve never looked back to a non-Tolkien life since. 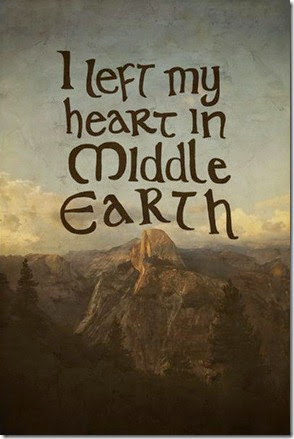 2. If you could meet the actors who portray the characters in the movies, would you?
YEAH I WOULD. Well. . .I’m not big on actors. Actors are weird. . . I’m a “love the character not the actor” sort of person. But I’m exceedingly fond of a lot of those actors. Namely Viggo Mortensen (Aragorn), Martin Freeman (Bilbo), Richard Armitage (Thorin), and Benedict Cumberbatch (who voices Smaug and happens to be one of my most favorite actors period). So yeah, if given the chance, I’d jump on it. 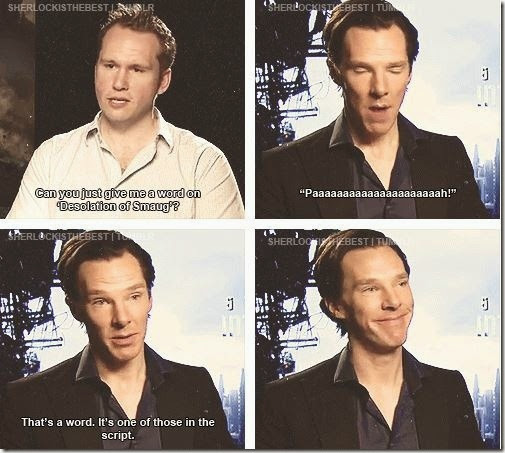 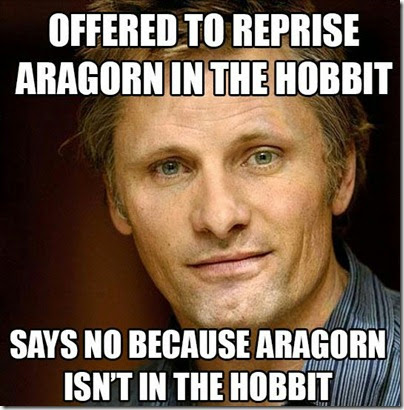 3. What is your favorite credit song from LotR/TH?
Billy Boyd sang one, peoples! There really is no choice here. Billy Boyd’s The Last Goodbye at the end of Battle of the Five Armies. Just. . .yes.

Really, Arwen? Really? You had to go there? *siiiigh* FINE. You asked for it. 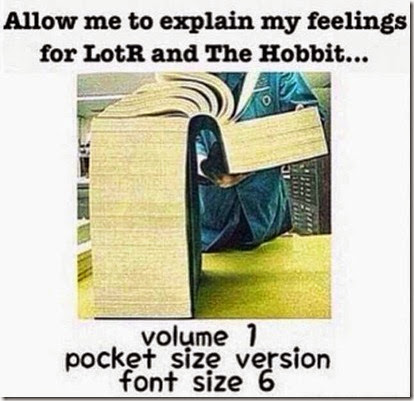 Let’s focus on the books first.

As obsessed as I am with the Lord of the Rings stories, they are a bit of a heavy read sometimes. I love the simplicity of The Hobbit. It’s easy to get through and the fun little tale just never gets old. I also read it first and it introduced me to Tolkien’s writing, so I’m probably most fond of it. I’ve also read it many more times than I have Lord of the Rings. But on the other hand, I like complicated stories. The bigger the better, in my opinion. I love humungo epic tales, and you just can’t get more epic than Lord of the Rings. But honestly, I don’t believe you can have one without the other. Choosing between one or the other feels wrong.

5. Who is your favorite all-around character?
*writhes on floor groaning* These questions, Arwen! Really!

When I was little I adored Frodo, and I still adore him. Mainly the book version. Elijah Wood did a beautiful job portraying our brave little hobbit, but the script made him a bit. . .erm. . .whiny? And a jerk sometimes. Which was so not okay. Frodo, the real Frodo, is brave and noble and kind and. . .okay. I won’t get into that. Ahem.

Anyways, as I got older Aragorn grew on me more and more, until one day I realized he had pushed himself right into first place in my heart. Very rude of him, I know. But really, Aragorn is AMAZING. He’s brave and has such a willingness to do anything to help his friends, and I mean anything, and just all around NICE and yeah. Aragorn is great. 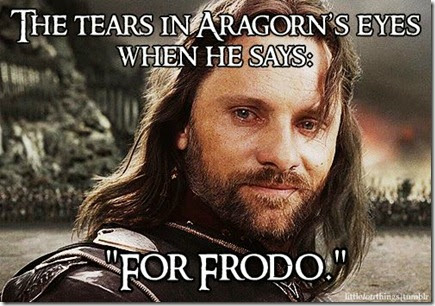 Probably my favorite part of all the movies put together.

6. What is your opinion on Boromir?
Let me tell you a story.

Once upon a time there was a little girl who didn’t know much about the world and people. She took everything as it was and didn’t think deeply about anything. This girl, in her naiveté, witnessed a man named Boromir make a few mistakes and thought that meant he was a bad person. Sadly, she had no regrets upon his death.

But this girl grew up, and through the years she learned many things about people. About good characters and flaws and what makes a person human. Slowly but surely, understanding, regret even, seeped into her heart, and she realized that the man named Boromir was not a bad man at all. He made mistakes, yes, but all mankind has. In reality, Boromir was good. He was loyal, so deeply loyal to his people he took foolish actions in hopes of helping them. He was loyal to his brother, his father, his home. Maybe his actions hurt others, but that was never his intent. He thought he was doing what was right. He was a man to be pitied.

Boromir taught the girl much about people. And for that she is grateful. 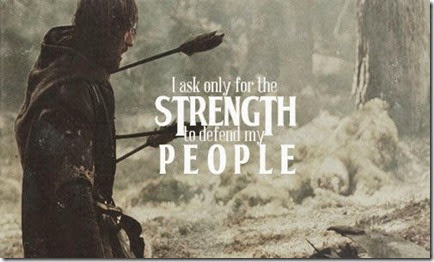 7. How many times have you watched the movies/read the books?
HAHAHAHAHAhahahahahaHAHAHaHA. . .ha. . .ha. . . *chokes*

I’ve watched the Lord of the Rings movies over and over and over again since they came into existence. I’m not sure I know how to count that high. But I have only seen the first two Hobbit movies twice and the last one once. 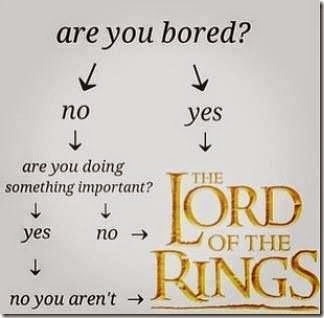 As for The Hobbit book, I’ve reread it more than any other book I own. I think I’ve read it around 12 times, but I sort of lost count around 10. Yeeeah, I have problems. I’ve read the Lord of the Rings trilogy 3 or 4 times, but I shamefully can’t remember exactly. I think only 3 though.

8. What book is your favorite?
I’m pretty sure I answered this in question #4. XD But if I had to choose only one, probably The Hobbit. Ugh. Maybe. Choosing is HARD. Out of the three Lord of the Rings ones though Return of the King is my favorite. The story just gets more and more epic as it goes on.

9. Who is your favorite female character (other than your answer to question #5)?
Éowyn, without a doubt. She sacrificed so much for her family, even in the midst of her own losses. Her courage and selflessness is unmatched. And while she knows how to fight and desires to do so, she doesn’t try to be “one of the boys” like so, so many female characters do. She kept her femininity even while fighting for her loved ones. She’s an inspiration. 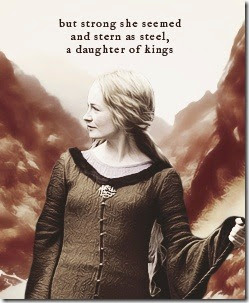 And don’t even get me started on her and Faramir or I’ll be fangirling and gushing all day.

10. Who is your favorite male character (other than your answer to question #5)?
*more groaning noises*

All right, all right. After warring a battle as gruesome as that at Helm’s Deep inside my mind, I think I’ve come to a conclusion.

Bilbo Baggins. I know, you probably thought I was going to say Frodo. Those who knew me in my young days would be shocked. My Frodo obsession was strong, I’ll be honest. But I guess it’s okay for one’s taste to change in the span of 12 years.

I feel as though Bilbo was the first person I ever went on a real adventure with. He was the first to be read about, to spend countless hours at night with a flashlight turning page after page with far too much anticipation to bother about going to bed. Who I woke up with in the morning and immediately picked up his book to pour over before I had to drag myself away for lunch. You just don’t forget your first adventuring companion.

But nostalgia aside, Bilbo is just an amazing character in general. He stuck by Thorin and co. time and time again despite his desire to return to his chair and books in the Shire. He got them out of countless jams, and did exactly what he thought he needed to do to save them from their own selfishness. He didn’t have to stick with these dwarves and their suicidal quest. But he did anyway. All the way to the very end.

And let’s not forget his dry wit. I’ll love anybody with a good sense of dry humor. 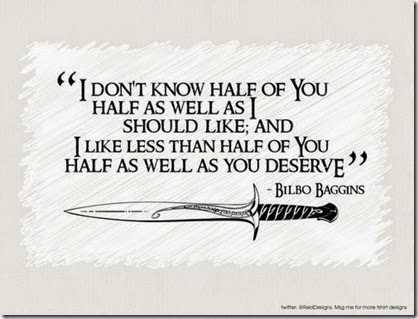 I also could probably do an entire post on how perfect Martin Freeman’s portrayal of Bilbo was, but I’ll spare you.

11. Which of the movies, in your opinion, has the best ending?
That’s a tough question, because I think they all ended well (even if The Desolation of Smaug was awfully cruel). But, really, the way I see it there’s only one ending and that’s Return of the King. Even at the end of Battle of the Five Armies we know there’s much, much more to come. But Return of the King pulls it all together and gives us a satisfying, if not tear inducing (okay, more like a sobbing fest) finale. It’s all wrapped up beautifully, with a touch of bittersweetness yet full of hope. What more could you ask for in an ending? 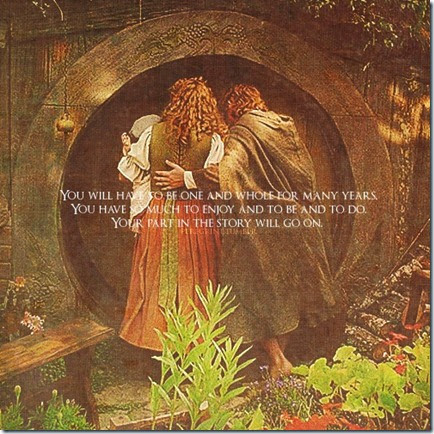 This was an absolute blast letting my Tolkienknight self geek out for a while. I probably could have spent an hour on each question, but I tried to behave. Thank you again, Arwen!

So let’s pass this thing on to more Tolkienknights.

Deborah/Celti @ The Road of a Writer

Posted by Christine Smith at 8:31 PM