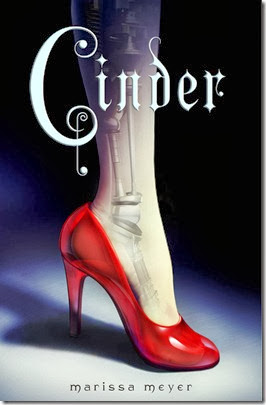 Synopsis
Humans and androids crowd the raucous streets of New Beijing. A deadly plague ravages the population. From space, a ruthless lunar people watch, waiting to make their move. No one knows that Earth’s fate hinges on one girl.

Cinder, a gifted mechanic, is a cyborg. She’s a second-class citizen with a mysterious past, reviled by her stepmother and blamed for her stepsister’s illness. But when her life becomes intertwined with the handsome Prince Kai’s, she suddenly finds herself at the center of an intergalactic struggle, and a forbidden attraction. Caught between duty and freedom, loyalty and betrayal, she must uncover secrets about her past in order to protect her world’s future.

Summary
Cinder is the sci-fi, dystopian-ish debut novel of Marissa Meyer. And let me just say, this lady needs to keep writing! She’s got talent!

I kept seeing this book floating around and it piqued my interest, so when I stumbled across it on sale, I couldn’t help but snag it. I wasn’t sure what to expect from it. This is quite literally a story about a cyborg Cinderella. Yeah. Far different from anything I’ve ever read, but I think that’s why I loved it so much. It’s got a very unique feel that I just soaked up.

Meyer has a very distinct writing style that really made the story. The simple, fast paced, and witty flavor kept me turning pages. What I really loved was her ability to tell the whole story without ever once info dumping. I don’t know how she did it. With just a couple of sentences, she would explain very crucial things. You would know exactly what was going on without having to dig through paragraphs and paragraphs of information. It all flowed quick and smooth. Not to mention she tells very intriguing stories!

Plot
The story is set on Earth far in the future sometime after World War IV, following the story of Cinder, a 16 year old cyborg forced to live under the rule of her “wicked stepmother”. Cinder is a very skilled mechanic. When Prince Kai himself needs her help to fix a broken android and worms his way into her life, she can’t help but fall for this charming fellow. But cyborgs are not thought well of in society, and being one herself, Cinder knows she could never have anything with the prince.

Things get even more complicated when one of her stepsisters falls ill with an incurable plague devastating the population, and Cinder is blamed for bringing this disease to her sister.

But the plague is not the only thing putting the world into turmoil. A mystical society living on the moon known as the Lunar people are threatening war against the Earth, hoping to claim it for themselves. Prince Kai is desperately searching for an escape, but everyday this takeover appears to be more and more inevitable.

When it’s discovered that Cinder oddly cannot catch the disease, her world flips upside down as deadly secrets of her past unfold.

I’ve seen a lot of people say this book would have been better if it wasn’t bogged down by the Cinderella aspect of it, but actually I think that’s why I loved it so much. Yes, it does have a unique story that could have been told perfectly well without trying to weave in a Cinderella retelling, but I personally felt like that was what made it so intriguing. I might be a tiny bit biased though because Cinderella is one of my absolute favorite fairytales. Still though, it takes some real talent to make a futuristic, sci-fi tale with war and plagues and whatnot threatening the world and turn it into a Cinderella story, a cyborg Cinderella story. I loved it! It was so interesting and a really fun read. Because even though you do have a bunch of different things going on, the core is still a Cinderella tale, and I thought that was great.

What I found fun about this book was the world itself. Sometimes I get bored with over the top explanations of how things work, and info dumping on what this device is, or how that government works, so on and so forth. There was none of that in this book. You get the feel that it certainly is far, far in Earth’s future and much different from our world now, but there were no long descriptions of any of that. Yet somehow you just know how it all works, and what these strange devices people are using are, and how the society functions. I really don’t know how the author managed to do that without ever really giving descriptions on things. I wanted to take notes! It was really well done.

Now one problem with the plot was predictability. I basically knew from the start what was going to happen, there wasn’t too many surprises along the way. It was still an enjoyable read though.

Characters
Meyer did a fantastic job making her characters feel real. I could hear every conversation in my head perfectly because it just felt so realistic. I never once felt as if the characters were too flat or inconsistent.

Overall I liked all the characters, except the most important one: Cinder. I still haven’t made up my mind about her. I didn’t hate her at all. A lot of times I liked her a lot. She did feel very real and there were a lot of moments where I could relate with her. She just wasn’t very. . .Cinderella-ish. Cinderella is one of my favorite fairytales because of Cinderella herself. She always has such a sweet spirit. Even though she’s treated so cruelly, her life is so unfair, she never really lets it make her bitter. She holds on to hope and love and really cares about people. Fictional character or not, I’ve always looked up to Cinderella. The way she handles her circumstances is inspirational. But in Cinder, I didn’t get that at all.

This version of Cinderella is almost the opposite. She can be pretty bitter, and is feisty, and really doesn’t have a sweet spirit. I guess I’m so used to your stereotypical Cinderella, this one took me by surprise. Don’t get me wrong, she’s not this horrible person, she has a lot of good traits, I just wish she had been a bit of a better person. I’m okay with messed up protagonist when in the end they’ve grown and become good people, but Cinder never really changed. This is a series though, so maybe she’ll grow in the next books. Although I’m not holding my hopes too high.

The rest of the characters were lovely. Prince Kai, ah, Prince Kai. He was fantastic. He was absolutely “Prince Charming” but not in a Gary Stu sort of way. Like I said, these characters felt real. Those flawless princes fairytales are so prone to have get on my nerves. But Kai was nothing like that. Yes, he was super nice, but he was also just a guy. Not some mystical, perfect knight in shining armor we see so much in fairytales. He was fun, charismatic, sometimes had a temper, but still just a lovely character all around.

The “wicked stepmother” felt real as well. Yes, she was a horrible, horrible person, but still human, not merely wicked just ‘cause. When her daughter gets the plague, we see her shed many a tear. She was not a completely heartless being. . . .Just mostly. Eheh.

My favorite character was actually probably an android named Iko whose personality chip had a “defect”, which actually just meant she had a personality and wasn’t simply a robot. She was so much fun.

And the villain was properly creepy. Seriously, she gave me the shivers, which is exactly how a villain should be in my opinion.

All around, Meyer did a splendid job on her characters. Cinder herself just personally didn’t impress me much.

Appropriate Ages
Normally I try to avoid these popular, secular books because more likely than not there’s going to be something inappropriate in them. But Cinder actually surprised me. The majority of it was perfectly clean. There were really only two things that I very much wish hadn’t been in it. At one point Cinder cursed, she said a certain word twice. It surprised me because I was already past halfway through the book and hadn’t seen any language at all. In fact, it was around that time that I was thinking how pleased I was that there was no language. Usually in these kind of books there’s always some, which is one of the reasons I avoid them. I was very proud of the author, and then boom a curse word. Cinder was really, really, really upset at the time, but I still don’t condone cursing. Thankfully, though, that was the only time cursing occurred in the whole book.

The other thing was a couple of mentions of “Escort androids”. I won’t go into details about what these are, but if you think about it you can probably figure it out. These weren’t part of the story at all, and when mentioned it was just a passing, very vague comment about them. Still though, I wasn’t happy about the idea.

Other than those two things, the rest of the book was pleasantly clean. There was hardly even any lovey dovey stuff despite it being a Cinderella retelling.

It wasn’t too graphic either. At one point we see the hospital where the plague patients are kept, which isn’t all that pleasant because it’s basically a huge room full of dying people. Also, there’s a part where an android cuts out a chip from a dead person’s wrist. I think that was the most graphic scene.

We do have to remember, though, that Cinder is a cyborg, and she doesn’t really think much about just popping her cyborg foot off and on. That didn’t bother me, but I guess the idea can be a bit disturbing if you think about it. It doesn’t hurt her though. It’s not any different from changing a robot part really.

The villains are also pretty creepy, as previously mentioned. They have the ability to bend people’s will, hypnotize them basically. It’s not really magic though, I don’t think. There was a bit of a scientific explanation for it. I think these people were once human themselves, they just evolved over the years. Still, it was a bit weird.

All in all though, this wasn’t a too hefty book. Nothing ever went into overly graphic details. I still wouldn’t recommend it to real young readers. 15 and up, maybe?

Conclusion
Cinder is a very interesting story, veering far from the norm. Marissa Meyer’s unique style, realistic characters, and one of a kind plot grabbed me from the beginning. I devoured this book and instantly marked it as one of my favorites. For a YA secular book it stayed pretty clean (because we all know there’s SO much junk in the YA department right now), and overall it was just a lot of fun.

Word of warning though, this is the first book in a series, and the ending isn’t exactly “happily ever after”. You’re probably going to want to get your hands on the next book, Scarlet, after reading this one. I know I do! I’m dying to get my hands on the second book! It apparently still follows Cinder’s story but is also a Little Red Riding Hood retelling. Yeah, these stories are so cool!

And this review got way longer than I meant it to. In summary: I LOVED THIS BOOK.

Posted by Christine Smith at 3:46 PM