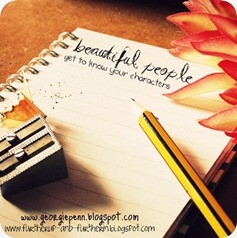 Thanks to an awesome person I know from the NaNoWriMo site named ZNZ and her fantastic blog (which you should totally check out) Jotting Down Notes, I have discovered something called Beautiful People. Two lovely bloggers, Sky and Georgie, started this some months ago. Every month they give out a list of questions for bloggers to answer about their personal story characters. You can do the same character each month or choose a different one each time. If you would like you can check out the FAQ for more information.

It is such a wonderful idea and I’ve been meaning to do it for months, but am not actually getting around to it until now…

This month will actually be different from their usual questions, because this time instead of asking questions about your character it is about your NaNo novel (or any other novel if you are not participating in NaNoWriMo) since NaNoWriMo is coming up. If you want to join in you can find the questions here or here.

3. Sum up your main character(s) in one word.
Naidren: Protective.  Nyria: Rambunctious.

5. Tell us about your secondary characters, how do they affect the story?
They affect the story quite a bit actually. First you have an uptight king who orders the characters to be kept inside his city and put under watch because he fears they are enemies, thus putting the entire story into motion. Then there is the bitter girl who claims it was their fault her sister died and in the end becomes a major ally. Of course, then you have to have the charismatic boy who probably will sweep the main girl off her feet in the end (but I don’t want to tell him that yet, can’t let him get a big head, now can we?).
Those secondary characters sure can be busy little things, can’t they?

6. Do you plan on staying up till midnight on the 31st?
Absolutely! Who can sleep when your characters are banging your head like an anvil demanding you start writing about them the moment you are allowed to? *glares at Nyria*

7. How many years have you done NaNo?
This shall be my second year.

8. What came first, characters, or plot idea?
This is technically the second book in a series I started last NaNo, so I already had it all planned in my head. But for the first book a single character popped into my head and from there a crazy long series formed itself.

9. How much prep do you do before November?
Lots. You can read all about my planning process on my previous post. Although this year, since it is the second book in a series, I’ve not had to do as much planning as last year.

10. Now be honest, how do you really feel about NaNo?
One word: WHEE!!!! I cannot even express how much fun I had last year and how much I learned doing it. I am exuberantly excited about yet another month of insane writing!!

Posted by Christine Smith at 7:51 PM