Dragons in Our Midst/Oracles of Fire Series Book Review

This review is near spoiler free and should not ruin your reading experience of this series. 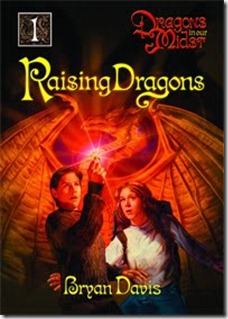 Synopsis
When Billy discovers he has dragon genes and finds that dragons slayers still exist in the current modern times, he is thrust into an adventure that changes his life forever.

Bonnie has known of her dragon past for a long time, and has suffered greatly for it already; but when she transfers to a new school her life takes an ever more dangerous turn and is never the same again.

A boy with the ability to breathe fire. A girl with astounding dragon wings on her back. A crazed dragon slayer who will stop and nothing to kill them. Why do these humans have dragon genes in the first place?

Amazing adventures, puzzling riddles, impossible mysteries, endearing characters, and a strong faith that takes them every step of the way—the Dragons in Our Midst and Oracles of Fire series are definitely not something you will want to miss out on.

Summary
The Dragons in our Midst/Oracles of Fire series is a contemporary, Christian, fantasy series set in 8 books written by Bryan Davis. The first four are known as the Dragons in Our Midst series, while the last four changes to Oracles of Fire. Though the name changes halfway through, they are all still very much one series and not something you would want to read separately or stop halfway through.

Now, you must know, I read a lot and love many books, but this series is, without any doubt, my absolute favorite of all time. I am not even sure I can put in one review how good these books really are, but I shall do my best.

Plot
One of Bryan Davis’s most gifted talents is being able to weave a plot. Many stories we read are often very cliché and predictable. Sometimes it is too easy to guess what is going to happen next which makes for boring reading. Bryan Davis has no such fault. His plots get so utterly deep, impossibly complicated, and near heart-pounding exciting that you will find yourself staying up at atrocious hours turning page after page (I know I do!). There is no cliché plot to be found in this series nor is there anything predictable about it. These books are not something you grow tired of because it is not moving on quickly enough or your just getting wary of it. Each turn of the page brings yet another wave of excitement and mystery.

Material
As far as material of the plot, this series has quite a range of interesting things. Though I read like a mad person, I am actually very picky with what I read. Firstly, I want clean books, but also I really do not like much else but fantasy. I am not big on things set in the real world or in modern times, preferring captivating fantasy worlds with enchanting creatures instead. Yet the Dragons in Our Midst/Oracles of Fire series is set in the real world and modern times. So why do I love it so much? Well, because these books are just too amazing for words!

As the name obviously suggests, dragons are a very big part of this story, and what’s cooler than dragons on Earth in modern times? Then you have humans with dragon traits. I mean, a girl with dragon wings? Wow. Why do people have dragon traits you ask? You have to read the books to find out, silly. Anyways, other than the greatness of dragons (I am a huge dragon fan, by the way), there is a good deal of Arthurian Legend woven into the story, to which I am very fond of. Connecting King Arthur to modern day people is a very interesting plotline. You even have a great deal of epic battles and swordfights, and did I mention Excalibur?

There is also the factor that these books are not strictly fantasy, there is also a little bit of sci-fi thrown in that gives it a very interesting flair. If, on the other hand, you are not a sci-fi sort of person, I assure you that you will still enjoy these books. I will tell you a secret, I rather hate sci-fi myself, or at least I used to (I’ve very recently delved into a bit more now), but that did not waver me from my love of these books in the slightest.

One of the biggest things that kept my interest was the fact that these characters are not actually on Earth throughout the entire series. You read that right, there is actually a number of most intriguing places they visit all throughout it.

There is just so much fascinating material in this book that I could probably go on and on about it, but as to not completely spoil it I will stop here.

Characters
Personally, I think that when writing one should make their characters strong, lovable, and all around liked by the majority of your audience. I have to say, Bryan Davis did this better than any author I have ever known. There is not one character in this entire series of books (and there are many characters) that I do not like, no, let me say love. Each character, though completely different and utterly unique, is just as lovable as the other. Their strong faith and love for one another makes you cry every tear they cry, sympathize with their losses, and smile at their victories. Not once have a read a fictional book with such endearing characters as these.

As mentioned before, this series has quite a few characters throughout it. Like most books, it does not have just one or two main characters. Nearly every character introduced eventually has quite a large part within. Though Billy and Bonnie are the main characters from the start, others take the limelight as the series moves on. The entire series is not from the point of view of a single character. Throughout it nearly everyone gets their point of view. Most of them are often in different places and adventures of their own, so this keeps it exciting, while also keeping the reader interested and not growing bored.

Other Material
What I really love about this series is its messages. Being a Christian series it brings much heartwarming and faith rising. The love and faith of the characters helped strengthen my own love and faith. It taught me many great things and helped strengthen my relationship with God. There are such great messages woven through it without it sounding the least bit preachy.

Length
I am probably not the best judge on lengths of books. I like long books and series. I am the kind of crazy person that thinks Lord of the Rings is a perfectly fine size and love its length. I want things to be long, especially if I love them. Personally, I think this series is the perfect size. Each book ranges roughly around 100k words each, with 8 books in the series. It is probably not something you will read just within a couple of days, yet it is also not something you are probably going to spend a year reading either. I say for an epic series like this, they are the perfect size—not short, but not so long that you are growing utterly wary of reading them and ready for something new.

Appropriate Ages
There are quite a few battle scenes and many swordfights within these books. Evil villains, dangerous creatures, and hazardous scenery throw the characters into many death defying perils. While these things make the books greatly exciting, I would not recommend them to younger children. Not to mention the complicated plot and length. In the first book, the characters are 14 years old I believe (but do grow older as the books go on), and that would probably be the youngest I would read them.

Though the series is made for teens, I personally believe adults will also adore these books just as much as their children. These are no little kiddie books or silly teen novels. This is an in-depth story that can tug the hearts of many.

In conclusion, around 14 and up would be my suggestion.

Conclusion
With its complicated plots, lovable characters, excitement, and amazing adventures, the Dragons in Our Midst/Oracles of Fire series is worth every penny and more. You will find yourself delving deep into the adventures, caring greatly for the characters, strengthening your faith and relationship with the Lord, and wanting to read these books over and over and over again. Bryan Davis is an astonishing author that can weave a story like no other.

If you are looking for something to read, this series would be my number one pick.

And trust me when I say, you are going to want to read them in that order.

I recently read this series for the third time through because Bryan Davis has started a continuation of this story and characters’ lives that takes place some years after these end. My excitement upon hearing this may have resulted in jumping up and down and squealing like a four year old. This new series is called Children of the Bard and the first book, Song of the Ovulum, has already been released. Once I have read it, I hope to write a review.

This was my first book/series review to write, so I hope it was helpful and made sense. If you like how I sectioned it or think I should add something please let me know. Comments are always welcomed.^_^

Posted by Christine Smith at 3:00 PM